The man behind Romney's "self-deportation" plan

Adviser Kris Kobach hopes to force 5.5 million undocumented residents out of the U.S. by 2016 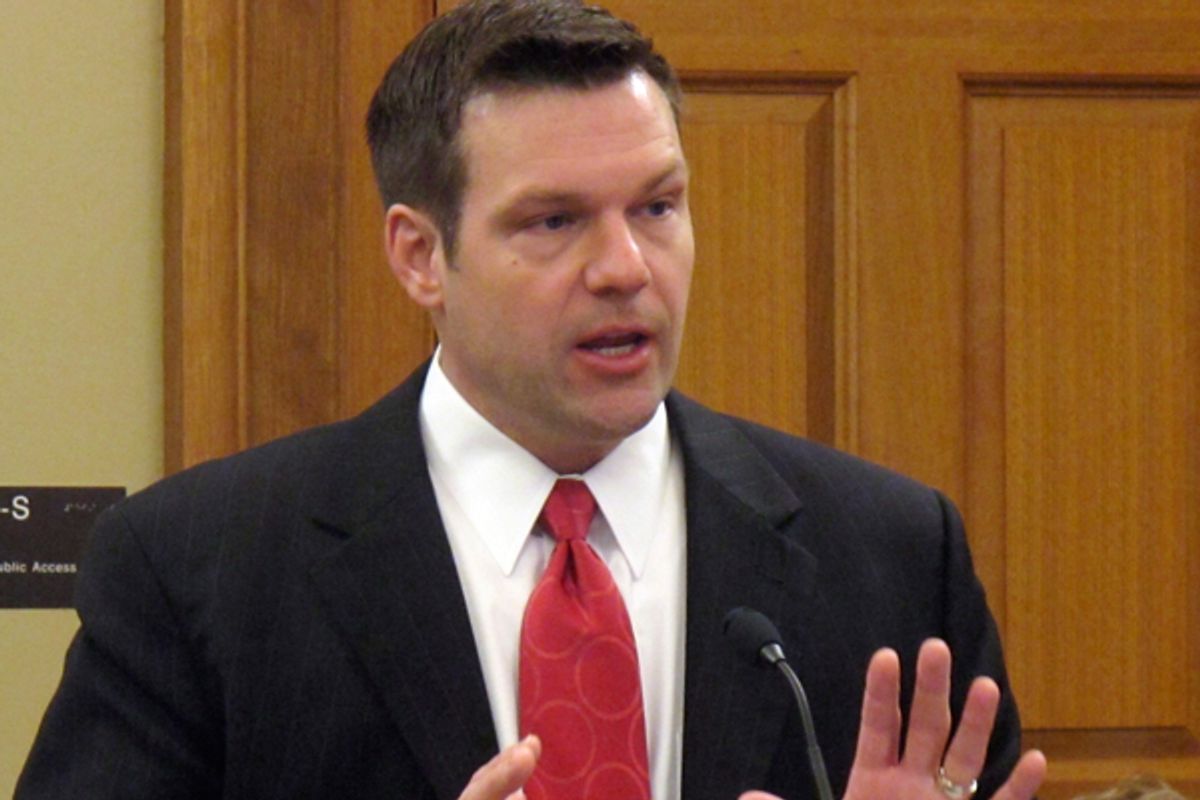 If Kansas Secretary of State Kris Kobach has his way, Mitt Romney's first term as president will see the largest forced exodus of people from the United States since the mid-1950s. Kobach, an adviser to the Romney campaign on immigration policy, is also the chief legal architect of a long-standing conservative campaign to stop the influx of undocumented immigrants, primarily from Mexico and Central America, who come to America to work .

"If we had a true nationwide policy of self-deportation, I believe we would see our illegal alien population cut in half at a minimum very quickly," Kobach told Salon in a recent intervew. With an estimated 11 million undocumented residents in the country, Kobach is hoping to force 5.5 million people to leave the country by 2016

Kobach, elected to statewide office in Kansas in 2010, advocates "self-deportation" but says  he does not want "to do it at gunpoint." Undocumented residents, he said, "should go home on their own volition, under their own will, pick their own day, get their things in order and leave. That's a more humane way."

A 45-years old Harvard graduate and father of three, Kobach is the man behind the Republican front-runner's most clearly articulated immigration goal: "Self-deportation." While the term does not appear on Romney's campaign website, Kobach uses it all the time. With the Republican candidates gathering in Mesa Arizona tonight for a nationally televised debate, the discussion of immigration issues may well touch on Kobach's rhetoric, as well as his legal accomplishments.

As general counsel for the legal arm of the Federation of Americans for Immigration Reform (FAIR) from 2004 to 2010, Kobach authored a number of state and local laws intended to discourage illegal immigration. He wrote S.B.1070, the Arizona's controversial law designed to identify and deport illegal aliens, a measure which has been partially blocked by a lawsuit brought by the Justice Department.The law is strongly supported by Arizona Governor, Jan Brewer, the finger-wagging foe of President Obama.

In an email Kobach said the enforced provisions of the Arizona law "are having the intended effect of making it more difficult for sanctuary cities to emerge in the state, and in facilitating greater cooperation between state and local government agencies and federal immigration enforcement efforts."

On immigration Romney has gained politically by talking tough. When Rick Perry said opponents of Texas's version of the federal DREAM Act, giving the children of illegal immigrants in-state college tuition, as heartless, the former Massachusetts governor, replied, "I think if you're opposed to illegal immigration, it doesn't mean that you don't have a heart. It means that you have a heart and a brain." When Newt Gingrich proposed a path to citizenship for long-time tax-paying undocumented families with no criminal records, Romney called it "a new doorway to amnesty."

Romney has matched his tough language with action. While the Republican front-runner  "tread lightly" on immigration issues during Florida primary, his campaign maintained regular contact with Kobach and announced the endorsement of former California Governor Pete Wilson, best known as a strong supporter of Proposition 187, a 1994 ballot initiative in California that was a precursor to SB 1070 that sought to cut off many public services to undocumented immigrants.

"Because he attracted such lightning rod figures (Wilson and Kobach) Latinos are going to take a hard look before voting for Romney," Patrick Young, a writer for the New York Immigration Action Fund website told Ruiz. "He has moved so far to the right compared to McCain and George W. Bush, that next to him, even Gingrich sounds moderate."

Kobach argues a policy of "attrition through enforcement" is a common sense measure that will boost economic recovery for people of all races and ethnicities. Full enforcement of SB 1070 in Arizona, he told me, will make it "more difficult for illegal aliens to violate the law; and that will in turn open up jobs for unemployed US citizens and unemployed lawfully present aliens."

Kobach's goal of harassing 5.5 million people into "self-deportation" by 2016 has no precedent in American history. The closest parallel may be Operation Wetback, an insultingly named deportation program launched in 1954-55 by the Eisenhower administration. Aimed at Mexicans living illegally in Texas and California, the program resulted in claims that 1.3 million people had departed or been deported, according to the Texas State Historical Association; many people thought the real figure was far lower. (FactCheck.org has a useful survey here.)

Kobach thinks a Romney administration could oust four times as many illegal immigrants as Operation Wetback over the course of its first four years. He cites Alabama's new anti-illegal immigration law, which he also helped write, as a model. The law, which requires public school student to prove their citizenship, undoubtedly prompted many illegal residents to leave. Within a week of passage of the law 2,285 Latino students were absent from school, according to the Immigration Policy Center, 7% of all Latino students statewide. Farmers complained they faced labor shortages. The Democracy Now radio program portrayed the bill's effects as a "humanitarian crisis."

Kobach defends the law saying it was "the catalyst" for the drop in the state's unemployment rate from 9.8 percent in September to 8.1 percent in December. But critics dispute the long-term economic benefits of self-deportation. A University of Alabama study, reported by Bloomberg, concluded that 40,000 to 80,000 immigrants will leave their jobs, shrinking the state's economy "by at least $2.3 billion and costing the state not less than 70,000 jobs."

Most of the damage will come from reduced demand for goods and services provided by Alabama businesses patronized by immigrants, says the study's author, Dr. Samuel Addy, an economist and director of the university's Center for Business & Economic Research. Addy estimates the law  will annually cost the state betweeen $56.7 million to $264.5 million in tax revenue.

Alabama is paying for Kobach's "failed experiment," said the editors of the Mobile Press Register earlier this month "What have we gotten for playing the guinea pig?" they asked earlier this month. "Crops rotting in the field, a net loss to the economy, higher racial tensions and a PR black eye, to boot."

Kobach says Romney, as president, should drop the Justice Department lawsuits against Arizona and Alabama laws and order the Justice Department to file suit against states that allow qualified long-term unauthorized immigrant students to receive in-state tuition. Kobach argues such laws are illegal, a position that has not found much support in the courts.

"A rational Justice Department would not be going after states that are trying to help enforce the law," Kobach told me. "A rational Justice Department would go after the states that are breaking federal law" by giving illegal aliens in-state tuition rate. (According to the National Conference of State Legislatures, those states with such laws are California, Connecticut, Illinois, Kansas, Maryland, Nebraska, New Mexico, New York, Texas, Utah, Washington and Wisconsin.)

Ever since running unsuccessfully for Congress in 2004, Kobach has faced accusations that he is associated with John Tanton, a veteran anti-illegal immigration activist and founder of FAIR.  The liberal Southern Poverty Law Center describes FAIR as a "nativist hate group" because of  its sometimes racially tinged arguments against illegal immigration.

The donor organization in question is the U.S. Immigration Reform PAC (USIRPAC), which gave Kobach $10,000 in 2003 and 2004, according to the Federal Election Commission. USIRPAC President Mary Lou Tanton is the wife of John Tanton.

In an email Kobach said he is "not familiar with [Tanton's] writings or his views," adding, "The efforts by some critics to tie me through six degrees of separation to people I have no connection with is absurd.  I have not done any legal work for any organization that expresses or supports racial discrimination, nor will I ever do so in the future. "

One question facing Mitt Romney on immigration issues is whether he shares Kobach's goal of prodding 5.5 million undocumented residents to leave the country by the end of  his first term. Another question is whether his administration would sue states whose universities offer in-state tuition to qualified children of illegal immigrants.

Kobach says he will not attend tonight's debate in Arizona but adds " I am in regular contact with Governor Romney’s campaign."