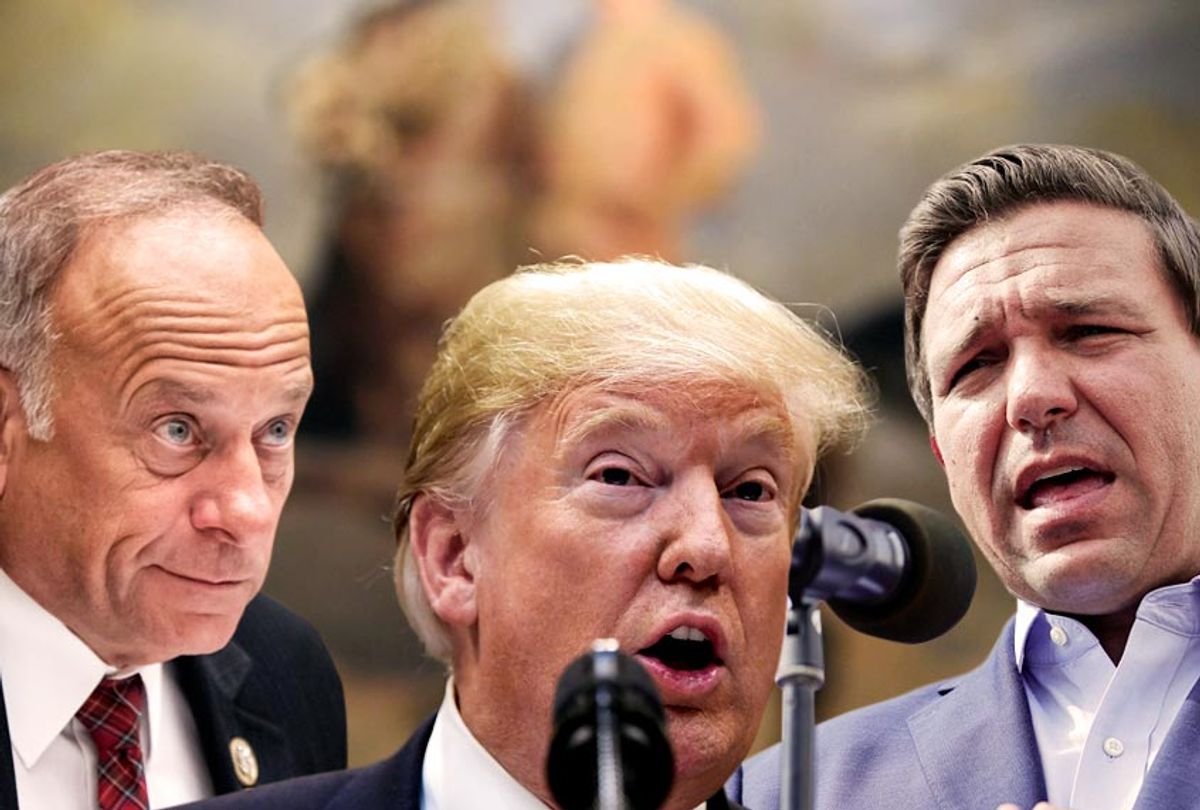 America is being held hostage by older white people — especially older white men. That, above all other things, is the moral of the 2018 elections. The CNN exit polls coming out of the midterm elections are stark in many ways, particularly tracking the growing gender and education gaps among voters, but what is most startling is how white people over 45 are heavily Republican and no one else is.

Since pollster Steve Koczela posted that screenshot, the exit polls adjusted slightly, showing that white people ages 30-44 are evenly split between Democrats and Republicans. But considering the age trend lines, it's nearly certain that's only because the over-40 crowd was pulling heavily to the right. Everyone else — black people, Latinos, white people under 30 — is overwhelmingly Democratic.

A huge, diverse nation is being controlled by a bunch of people who think the last good music was Led Zeppelin. The answer to why this is happening is complicated. Part of it is that older voters simply turn out in disproportionate numbers. Part of it, however, is the lingering effects of the baby boom, and the fact that there were just a whole lot of people born between 1946 and 1964. Part of it is the result of our increasingly outdated electoral system, which give a disproportionate share of power to votes in suburban and rural areas. That's how Democrats wound up losing several seats in the Senate this year, despite winning the popular vote by 15 percentage points.

And this is no doubt why Republicans continue to believe that as long as they hang onto the votes of middle-aged and elderly white people, the rest of the country's wishes don't matter. As has been evident for the last three years, Donald Trump believes the trick to keeping that voting bloc engaged and active is to be really, really racist. Trump took to Twitter on Wednesday morning to declare victory for his way of doing politics.

Despite the usual Trumpian triumphalism, realities on the ground do not suggest that race-baiting is as clear-cut an electoral strategy as he would like to believe. A number of candidates that embraced Trump's racist tactics lost their electoral bids Tuesday night. Rep. John Faso, an upstate New York Republican, lost his seat in a purple district after trying to stigmatize his Democratic opponent, Antonio Delgado, for having put out a single hip-hop record a decade ago. Kansas Secretary of State Kris Kobach, who made a name for himself leading efforts to create new Jim Crow laws to keep people of color from voting, was defeated by Democrat Laura Kelly in that state's gubernatorial race. Rep. Dave Brat of Virginia, a Tea Party-style Republican whose previous victories were based on scare-mongering about immigration, lost to Democratic challenger Abigail Spanberger in the upscale suburbs of Richmond.

But Trump isn't entirely wrong to believe that his tactics likely helped push some Republicans over the top. In the Florida gubernatorial race, Republican Ron DeSantis won with an overtly racist campaign, starting with an ad in which he bragged about indoctrinating his children into bigotry before they can even read and continuing with the on-air suggestion that Florida voters would "monkey" up the state if they elected his Democratic opponent, Andrew Gillum, who is black. DeSantis, who has spoken at white nationalist conferences, also had Trump pitch in by tarring Gillum with racist stereotypes about black criminality.

Gillum was leading by nearly four points in the polls going into Tuesday -- which suggests, unfortunately, that a lot of people who wouldn't admit their racist beliefs to a pollster expressed them in the privacy of the voting booth on Election Day.

Unabashed white nationalist Rep. Steve King also won re-election in Iowa. Rep. Duncan Hunter of California, despite being under indictment for using campaign funds to live the high life, also won by running a campaign based largely on accusing his Democratic opponent, Ammar Campa-Najjar, of being an Islamic terrorist. (Campa-Najjar, who worked in the Obama administration, has had security clearance — something Hunter's indictment would block him from getting.)

These wins were not slam-dunks, with King and DeSantis, in particular, skating in on razor-thin margins. But it's likely that most Republicans, like Trump, will see this race as a vindication of using overtly racist appeals to turn out the aging white voters who, by dint of geography, have more power per vote than the more diverse and liberal voters packed into urban areas.

The fact that there was high turnout in many parts of the country will only fuel this belief. No doubt much of that turnout came from liberal voters eager to repudiate Trump, but it's also clear from the numbers that a lot of it was due to conservative enthusiasm, as well. The likely conclusion Republican strategists will draw is that racism activates a lot of white voters, and sadly, they may not be wrong.

All of which means that things are likely to get worse on the racial relations front in this country. Trump, emboldened by what he's decided is a big win, will double down on the appeals to bigotry, and many Republican politicians will follow suit. Once the 2020 campaign starts heating up, fear-mongering, racist ads will almost certainly flood the airwaves again. But even before that, we can expect Trump to return to the well of demonizing immigrants, black athletes and other people of color every time he feels the need to rally his base in the face of unflattering news.

And the news will only get worse for Trump. As David Corn at Mother Jones reports, House Democrats are already compiling a list of dozens of issues where they will consider opening investigations. As we get into 2019, it's reasonable to expect that a whole bunch of currently hidden information about Trump's corruption and criminality will start to become public, creating even more incentive for Trump to change the subject.

The results of all this extend well beyond bitter and divisive electoral politics. The rising tide of racial animosity is leading to a surge of right-wing terrorism, as evidenced by the "MAGAbomber," the Pittsburgh synagogue shooting and other violent attacks in the weeks leading up to the election. While this is difficult to measure, significant anecdotal evidence suggest that white bigots are really feeling it themselves these days, and are more prone than ever to racist diatribes in public and efforts to use the police to intimidate people of color. All the fear and tension in American daily life will probably get worse before it gets better.

Despite all this, it's still a very promising sign that Democrats managed to eke out a victory in the House of Representatives. It's not just that they can offer a check on a rapidly deteriorating system. It's also that their victory was built on flipping a significant number of suburban districts from red to blue. That, along with the strong Democratic showing among white voters under 30, suggests that racial attitudes may finally be shifting among younger white people. It will be slow going — way, way too slow — but the movement seems to be, ever so haltingly, in the right direction.