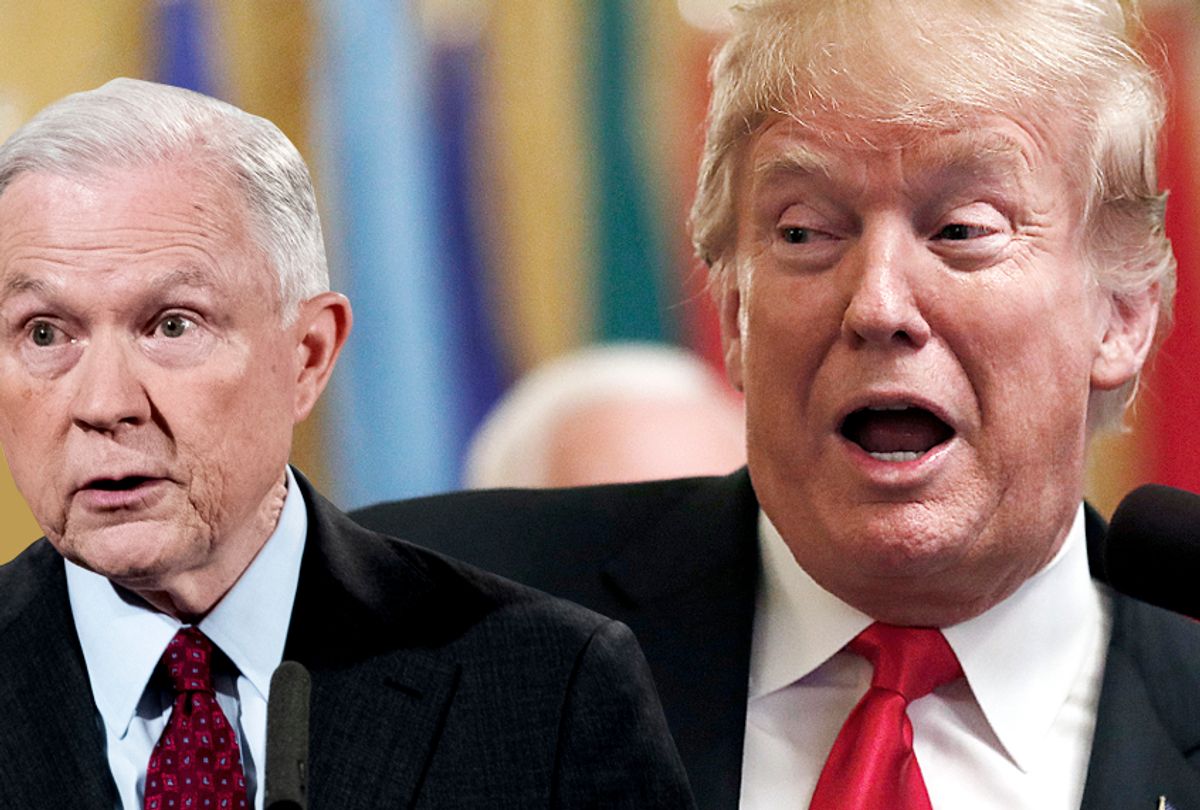 President Donald Trump has fired Attorney General Jeff Sessions, putting an end to a tumultuous partnership that the New York Times described as "one of the most acrimonious public standoffs between a commander in chief and a senior cabinet member in modern American history."

Sessions' resignation came at the president's request, the New York Times reports. "Dear Mr. President, at your request I am submitting my resignation," Sessions said in his letter.

His firing comes just one day after the midterm elections in which Democrats seized control of the House of Representatives and Republicans expanded their slim majority in the Senate, which will smooth the way for Trump to confirm a successor.

Sessions has been publicly scorched by the president ever since he recused himself from special counsel Robert Mueller's ongoing investigation into allegations of collusion between Trump's 2016 presidential campaign and the Russian government.

Barely one hour before news of Sessions' firing was made public, the president dodged a question about his troubled Cabinet member at a news conference.

"I'd rather answer that at a little bit different time," Trump told reporters.

Trump has repeatedly insulted Sessions and criticized his decision to recuse himself from the probe, even as Sessions has dramatically reshaped the Justice Department by implementing policies and initiatives that were cornerstones of the president’s campaign, such as expanding religious liberty and cracking down on illegal immigration.

Trump previously declared, "I don't have an attorney general" and blasted Sessions' alleged inability to "control" the Justice Department as "regrettable." He has also reportedly blasted Sessions as "mentally retarded" and a "dumb Southerner."

His replacement is a GOP partisan who has previously written op-eds titled, "Mueller's investigation of Trump is going to far" for CNN and "I would indict Hillary Clinton: Opposing view" for USA Today. Whitaker, who is a former Fox News contributor, has also defended Trump's decision to fire FBI Director James Comey in an op-ed titled, "Comey served faithfully, but the president made the right decision." In a CNN op-ed, he argued that any investigation into Trump’s personal finances would constitute “a red line” that Mueller is “dangerously close to crossing.”

Based on such writings, Democrats in the House and Senate have already called on Whitaker to recuse himself from the Russia probe.

Senator Lindsey Graham, R-S.C., predicted Monday that Sessions would resign from his post and that a new attorney general would be leading the Justice Department by early next year. The North Carolina lawmaker, who has wavered between criticizing the president's policies to cozying up to a commander-in-chief who occasionally invites him to golf outings at a Trump-branded resort, has previously spoken out in support of Trump’s ability to remove Sessions from office, declaring that the pair's "relationship is beyond repair."

"The president's entitled to an attorney general he has faith in – somebody that's qualified for the job. And I think there will come a time – sooner rather than later – where it will be time to have a new face and a fresh voice at the Department of Justice," Graham previously stated. "That's an important office in the country. And, after the election, I think there will be some serious discussions about a new attorney general."

Graham, who has emerged as one of the president's greatest allies in the Senate, could play a pivotal role in replacing Sessions. Graham wants to become chairman of the Senate Judiciary Committee after the midterm election, if the current chairman, Senator Chuck Grassley, R-Iowa, grabs the gavel of the Finance Committee, according to the New York Times.

Graham, whose vehement defense of Supreme Court Justice Brett Kavanaugh amid allegations of sexual misconduct and harassment garnered widespread media attention, told Hewitt that the Democrats' "complete destruction" of Kavanaugh during his confirmation process would launch a major change for the Judiciary Committee.

If Republicans maintain a majority in the upper chamber after Nov. 6, Graham warned: "we're going to be full throttle when it comes to judges."