From Chris Christie to Kris Kobach: Jeff Sessions' replacement could be much worse 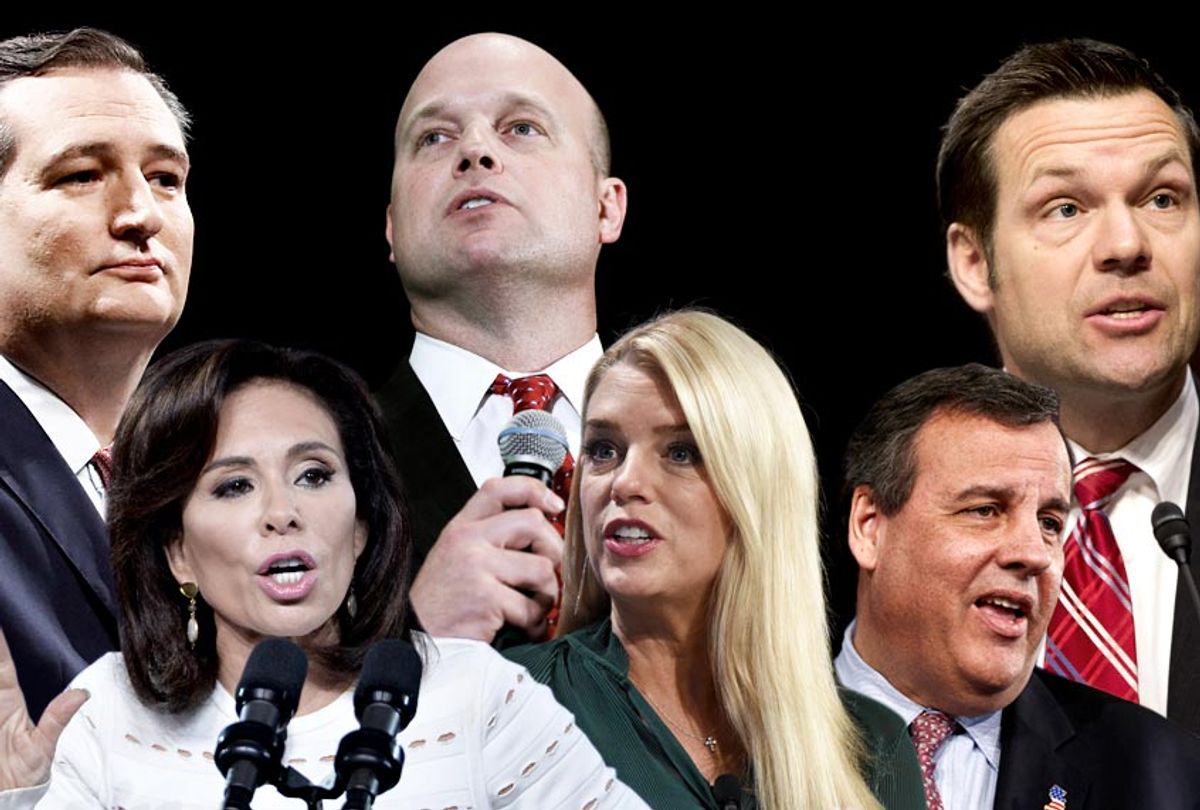 President Donald Trump fired Jeff Sessions one day after the midterm elections, putting an end to a tumultuous partnership that the New York Times described as "one of the most acrimonious public standoffs between a commander in chief and a senior cabinet member in modern American history."

While his ouster isn't surprising — Sessions has been publicly scorched by the president ever since he recused himself from special counsel Robert Mueller's ongoing investigation into allegations of collusion between Trump's 2016 presidential campaign and the Russian government — he did dramatically reshape the Justice Department throughout his year-long tenure. He implemented policies and initiatives that were cornerstone pledges from the president's campaign, such as expanding religious liberty and cracking down on illegal immigration. Sessions was also the first Senator to endorse Trump's White House bid.

But with Sessions now out, the president must choose the nation's next top law enforcement official. Here are six people Trump is reportedly considering to replace Sessions as attorney general.

Trump's acting attorney general in place of Jeff Sessions previously served as Sessions' chief of staff and is a GOP partisan who has previously said "judges must be 'people of faith' with a 'biblical view of justice,'" while running for a Senate seat in Iowa in 2014. Since his tenure at the Justice Department, Whitaker has emerged as a Trump loyalist, writing op-eds titled, "Mueller's investigation of Trump is going too far" for CNN and "I would indict Hillary Clinton: Opposing view" for USA Today. He's also a former Fox News contributor and has also defended Trump's decision to fire FBI Director James Comey in an op-ed titled, "Comey served faithfully, but the president made the right decision." In a CNN op-ed, he argued that any investigation into Trump's personal finances would constitute "a red line" that Mueller is "dangerously close to crossing."

He also recently retweeted a Philadelphia Inquirer article titled "Note to Trump’s lawyer: Do not cooperate with Mueller lynch mob," added, "Worth a read."

Democrats in the House and Senate have already called on Whitaker to recuse himself from the Russia probe.

Whitaker has also previously proclaimed he's "100 percent pro-life" and that he'd "support amending the U.S. Constitution to define marriage as exclusively between one man and one woman."

The former Kansas Secretary of State, right-wing activist and politician who has waged a tireless crusade to curtail immigration and voting rights in America, most recently lost a tight contest to be named the state's next governor. He graduated summa cum law from Harvard, received a master's and doctorate at Oxford as a Marshall Scholar, and attended Yale Law School — Trump loves an Ivy League pedigree — and he has championed the president's anti-immigration agenda, going as far as to take credit for Trump's plans to "make Mexico pay for the wall." In 2017, Kobach headed Trump's now-defunct Presidential Advisory Commission on Election Integrity, which uncovered no evidence to support the administration's claims of widespread voter fraud in the 2016 election. The commission was disbanded after many states refused Kobach's demand to hand over their confidential voter rolls to the federal government. Kobach is also a paid Breitbart News columnist, where he has articulated his hardline anti-immigration views. The Trump loyalist, who once accidentally leaked Homeland Security documents that revealed a plan to put Trump's hard-line immigration platform into practice, was reportedly under consideration as Secretary of Homeland Security. He also served as an adviser on immigration to Mitt Romney's 2012 presidential campaign and has advocated for "self-deportation." Trump holds the key to revive Kobach's political fortunes at a time when they appear to be a vanishing act.

The former New Jersey governor who was once a rising star in the Republican Party until he fizzled out on the national stage was spotted at 1600 Pennsylvania Ave one day after Sessions' firing.

He ran a failed presidential campaign in 2016 and endorsed Trump three weeks after giving up on his Oval Office ambitions. Christie then lead Trump's transition team and was even offered the vice presidential nomination, until Trump rescinded his offer because of Christie's "Bridgegate troubles," giving it to Mike Pence. Christie was then demoted to co-vice chairman and replaced by Mike Pence as head of the transition team and then pushed out because "Trump got annoyed" that Christie tried to hog his spotlight. To add insult to injury, Trump hired a former Christie aide, who federal prosecutors suggested helped create the culture that led to the Bridgegate scandal, to lead the White House's political operation. Christie previously blamed his wife for Trump's decision not to hire him. He is reportedly loathed by Trump's trusted son-in-law and White House adviser Jared Kushner, whose father Christie sent to prison when he was a U.S. Attorney in 2004. He was also shunned by Bruce Springsteen and escorted by state police when he tried to circumvent a TSA checkpoint at Newark Liberty International Airport. He left office as the most unpopular governor in New Jersey's history with an approval rating of just 15 percent. Despite a tumultuous relationship, Christie reportedly found his way back to Trump's heart and could revive his political career as the nation's next top law enforcement official.

The Florida Attorney General previously came under scrutiny for "auditioning" for Fox News, where she commented on topics ranging from special counsel Robert Mueller's investigation and openly criticized Democrats, while still serving in elected office. Bondi was also embroiled in an ethics controversy during the 2016 presidential election after she got an illegal contribution from the Trump Foundation. Bondi's tenure as state attorney general will wrap up in a few months, and she could land a spot at Fox News thereafter, following in the footsteps of other former top Republican officials like Mike Huckabee and Sarah Palin. The Trump ally and career prosecutor could also take over control of the Justice Department.

Fox News host Jeanine Pirro is reportedly ready to leave her day job and has her sights on serving as President Trump's Attorney General. The former prosecutor and judge whose admiration for the president knows no bounds previously accused special counsel Robert Mueller of a Benghazi cover-up and called him the Democrats' "serial cleaner." In June 2017, Politico reported that Pirro has "repeatedly told Trump's aides and advisers over the past 18 months that she's interested in taking over as the nation's top law enforcement official." Pirro's Fox News colleagues have reportedly "laughed at her frequent mentions of the possibility of getting senior-level government work." Although Trump has allegedly been complicit in her Justice Department ambitions, Pirro seems to be counting on her decade-long friendship with the president to send her to Washington. The Trump whisperer has demonstrated her willingness to stand by the president no matter what — and Trump has made it clear he favors loyalty over nearly everything else.

A long shot, admittedly, the Texas Republican was narrowly defeated Democratic Rep. Beto O'Rourke in one of the most-watched Senate races of the 2018 midterm election cycle. Although he was just elected for a second term, Cruz reportedly still has his eyes set on the White House. Throughout his campaign, Cruz emulated Donald Trump, his former nemesis, by suggesting that the "hard left" had dark visions for the future of the Lone Star State. He also took cues from Trump's midterm playbook by pushing a fear of immigrants to the forefront of his election strategy discourse. The Republican lawmaker is also a graduate of Harvard Law School and Trump reportedly considered him for the role of Attorney General before choosing Sessions two years ago.