Matt Whitaker has a close friendship with Sam Clovis, an Iowa politician and witness in the Mueller investigation 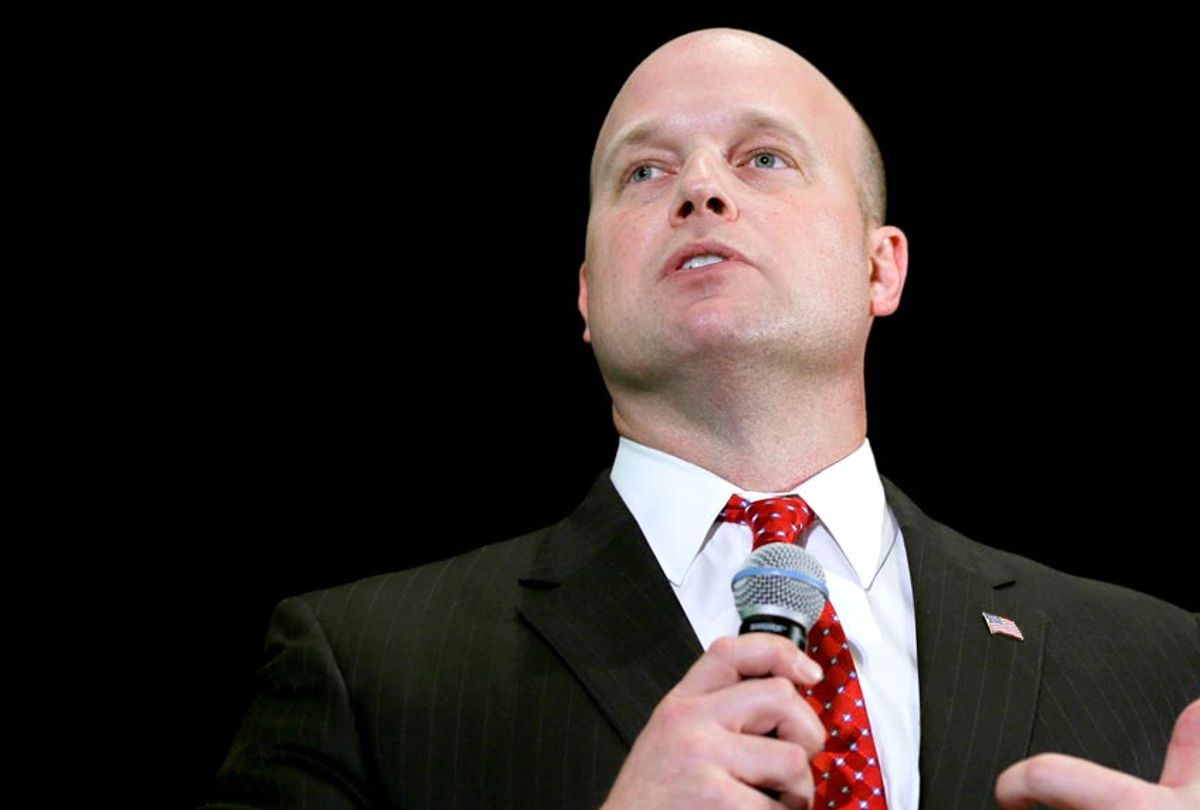 President Donald Trump's new interim attorney general, Matt Whitaker, will have a major conflict of interest regarding his relationship with the Robert Mueller investigation upon taking office.

Whitaker has what has been described as a very close friendship with Sam Clovis, who served as one of Trump's campaign co-chairmen in 2016 and appeared in an indictment of Trump campaign aide George Papadopoulos in the role of "campaign supervisor," according to The Washington Post. As Clovis told Talking Points Memo, "He and I are very good friends, very close friends, and I’m very happy for him. He’ll fit right into this, he’ll be a great acting Attorney General and I hope he gets the opportunity to become the Attorney General. He’d be great for this country. He’s a strong and clear-pictured conservative and I think he’d be a great supporter of the president of the United States."

Talking Points Memo goes on to describe how Clovis and Whitaker ran against each other in the Republican primary for the Iowa Senate in 2014, with Clovis finishing second and Whitaker finishing fourth. The two developed a close friendship during that campaign and stayed in touch as Clovis began working with the Trump administration, including briefly serving as the administration's adviser to the U. S. Department of Agriculture. Clovis told Talking Points Memo that his interview with the Mueller team was "brief but intense, and it appeared that they moved on."

The Washington Post has provided more details about Clovis' relationship with the issues at the heart of the Mueller probe:

Victoria Toensing, an attorney for Sam Clovis, confirmed that several references in court filings to "the campaign supervisor" refer to the onetime radio host from Iowa, who served as Trump's national campaign co-chairman.

At one point, Papadopoulos emailed Clovis and other campaign officials about a March 24, 2016, meeting he had in London with a professor, who had introduced him to the Russian ambassador and a Russian woman he described as "Putin's niece." The group had talked about arranging a meeting "between us and the Russian leadership to discuss U.S.-Russia ties under President Trump," Papadopoulos wrote. (Papadopoulos later learned that the woman was not Putin's niece, and while he expected to meet the ambassador, he never did, according to filings.)

Clovis responded that he would "work it through the campaign," adding, "great work," according to court documents.

In August 2016, Clovis responded to efforts by Papadopoulos to organize an "off the record" meeting with Russian officials. "I would encourage you" and another foreign policy adviser to the campaign to "make the trip, if it is feasible," Clovis wrote.

Toensing said Clovis "always vigorously opposed any Russian trip for Donald Trump and/or the campaign." She said his responses to Papadopoulos were courtesy by "a polite gentleman from Iowa."

Whitaker does not share that view — and his difference of opinion has been a source of concern since it was announced that he would replace outgoing Attorney General Jeff Sessions. Writing for CNN in August 2017 about Trump's statement that Mueller should not investigate his finances, Whitaker argued that "the President is absolutely correct. Mueller has come up to a red line in the Russia 2016 election-meddling investigation that he is dangerously close to crossing." On other occasions Whitaker suggested that Trump squash the Mueller probe by reducing its budget and that top Trump officials weren't wrong for meeting with a Kremlin-connected lawyer in June 2016 because "if you have somebody you trust that is saying you need to meet with this individual because they have information about your opponent, you would take that meeting." He did later admit that some of the information which had emerged about that meeting was concerning.