Scientific shouting match erupts over whether ʻOumuamua was an alien spacecraft 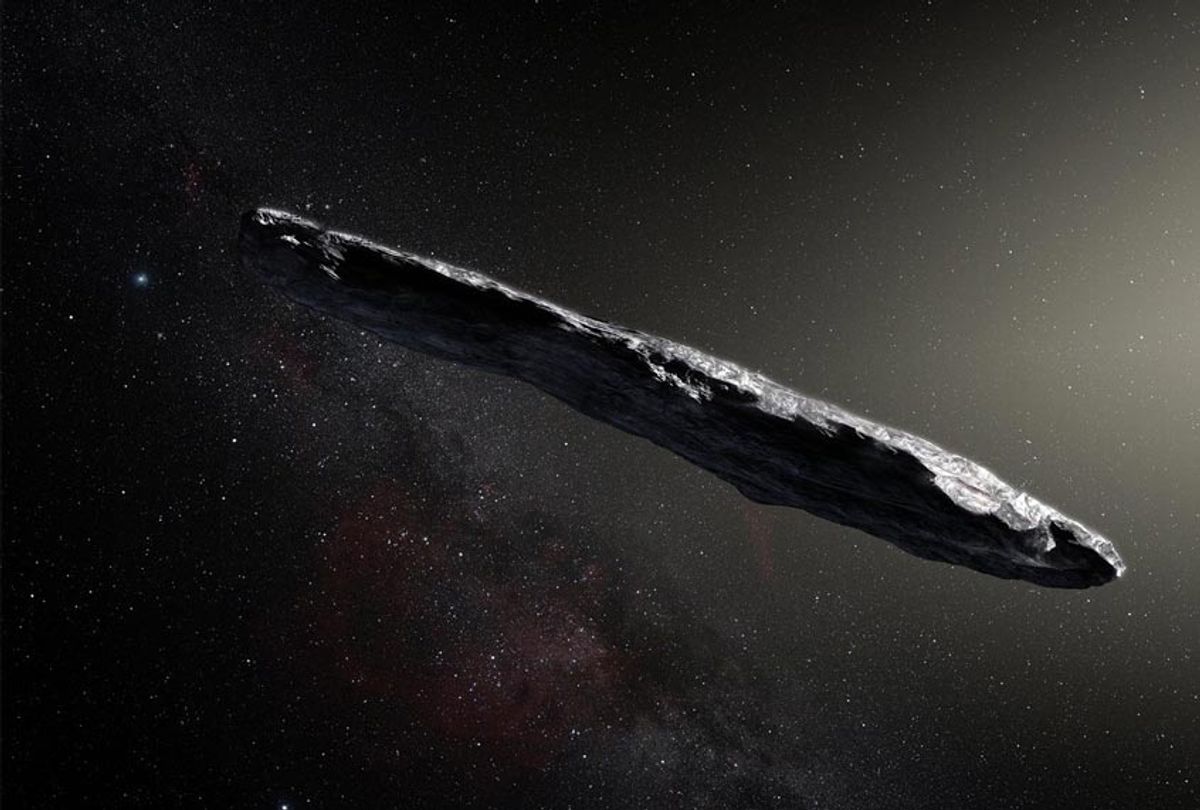 Scientists are still puzzling over last year’s interstellar visitor, ‘Oumuamua, and the latest theory is sure to excite UFO believers. According to a new paper published by astronomers from Harvard University, the mammoth, cigar-shaped rock that swung in and out of our solar system in October 2017 had some strange properties that suggest it was an alien spacecraft. And while 'Oumuamua's unique physical properties have prompted some scientists to speculate about aliens, other scientists are unconvinced and even concerned about the effect of such conjecture.

"'Oumuamua may be a fully operational probe sent intentionally to Earth vicinity by an alien civilization," wrote authors Abraham Loeb, professor and chair of astronomy, and Shmuel Bialy, a postdoctoral scholar, both at the Harvard-Smithsonian Center for Astrophysics.

‘Oumuamua, which is Hawaiian for "an object from afar," was first observed by a postdoctoral researcher at the University of Hawaii who was sifting through the data stream from the Pan-STARRS astronomical survey of the sky. The researcher noticed the object was highly elongated, like a stick, with a long axis 10 times longer than its short axis. Researchers suggested its shape would minimize abrasions from interstellar gas and dust, thus being an ideal shape for an interstellar spacecraft. Then in May, a paper published in the journal Monthly Notices of the Royal Astronomical Society suggested ‘Oumuamua swung towards our solar system as a result of a gravitational slingshot of a binary star system.

Researchers landed on the latest otherworldly conclusion by focusing on one of the rock’s most interesting properties: its unexpected acceleration trajectory after swinging past the sun, which suggests it was propelled by sunlight. Since there were no observed signs of cometary activity — such as a cometary tail, or gas emission absorption lines —  the possibility it could have been a comet was ruled out in the paper by Harvard researchers.

“'Oumuamua deviates from a trajectory that is solely dictated by the Sun's gravity,” Loeb told Salon in a statement. “This could have been the result of cometary outgassing, but there is no evidence for a cometary tail around it. Moreover, comets change the period of their spin and no such change was detected for 'Oumuamua."

After working out the hypothesis via a mathematical model, the authors speculate that the non-gravitational acceleration of ‘Oumuamua was due to solar radiation pressure.

“The only other explanation that comes to mind is the extra force exerted on 'Oumuamua by sunlight” Loeb told Salon. “In order for it to be effective, 'Oumuamua needs to be less than a millimeter in thickness, like a sail. This led us to suggest that it may be a light-sail produced by an alien civilization.”

Light sail propulsion systems have been created on Earth, and their origins date back to the 1970s, when  NASA toyed with the idea of flying a solar sail to Halley's comet. The project was cancelled, but the nonprofit Planetary Society has since successfully established their own program to construct light sail–propelled spacecraft.

Yet it is precisely this speculation that is causing a minor row among scientists. Some researchers tell Salon the theory that 'Oumuamua is an alien light-sail is flawed, and falls outside the realm of science, as it is untestable.

“In science we have to be extremely careful about our hypotheses,” Paul Sutter, an astrophysicist at Ohio State University, told Salon. “My main critique is that as soon as you introduce aliens as a hypothesis you stop doing science, because aliens are capable of doing anything they want.”

Sutter said there is no way to test such a hypothesis.

“We are free to have any idea we want, and crazy ideas are welcome, but they need to be testable,” Sutter said. “Since [aliens are] always available you can never rule it out, which is why you can’t do science with it.”

The uncertainty and strange behavior of 'Oumuamua led researchers to speculate over an extraterrestrial origin, Sutter said, adding that scientists should be more patient or accept that they will never know what the foreign rock is this time around.

“Our only hope is that 'Oumuamua isn’t the only one out there, and that there are other random rocks tumbling through our solar system, and hopefully we can find observe 'Oumuamua’s cousin or great aunt [next],” he said.

Seth Shostak, a senior astronomer at the Search for Extraterrestrial Intelligence (SETI), told Salon the theory might be “an exotic solution to what may be a very mundane situation.”

“It could be somebody's solar sail that just wandered into our solar system or one that deliberately targeted ours, [but] you can’t say that’s not true because there is no way to prove that it is true,” Shostak told Salon.

Shostak added if it is an alien spacecraft that was deliberately sent, it is worth noting that it did not get very close to Earth.

“You would think that would be an interesting target for them,” he said. “It just comes in, swings around the sun, and goes back out; it’s like somebody interesting moving into the neighborhood,  walking by your house, and they don’t knock on the door or anything, so I don’t get it.”

Dr. Michael Wall, senior writer at Space.com and author of the forthcoming book "Out There",  said while he thinks it’s unlikely ‘Oumuamua is an alien spacecraft, the possibility shouldn’t be completely ruled out.

“I don't think it’s likely, but aliens almost have to be the last explanation,” he said. “You have to exhaust all the natural explanations first, but I don’t think it should be dismissed.”

Since nothing like ‘Oumuamua has been observed in our solar system, the natural explanations might still be unknown to humans.

“It is very likely we don’t have enough information and we probably never will,” Wall said. “It’s interesting, but it just shows there is a fine line we need to walk between being too dismissive and being too credulous.”

At the end of the day, this paper has been quite the topic of conversation among many scientists. Loeb told Salon he did not expect the paper would attract so much attention.

“I am glad to see the excitement about the paper, but it was not written for that purpose,” Loeb said. “We just followed the standard practice of scientific research.”