Another madman with a gun: But in a new Congress, there's room for hope

The latest mass shooting is horrifying, but the midterms show there might be a real shift in the gun debate 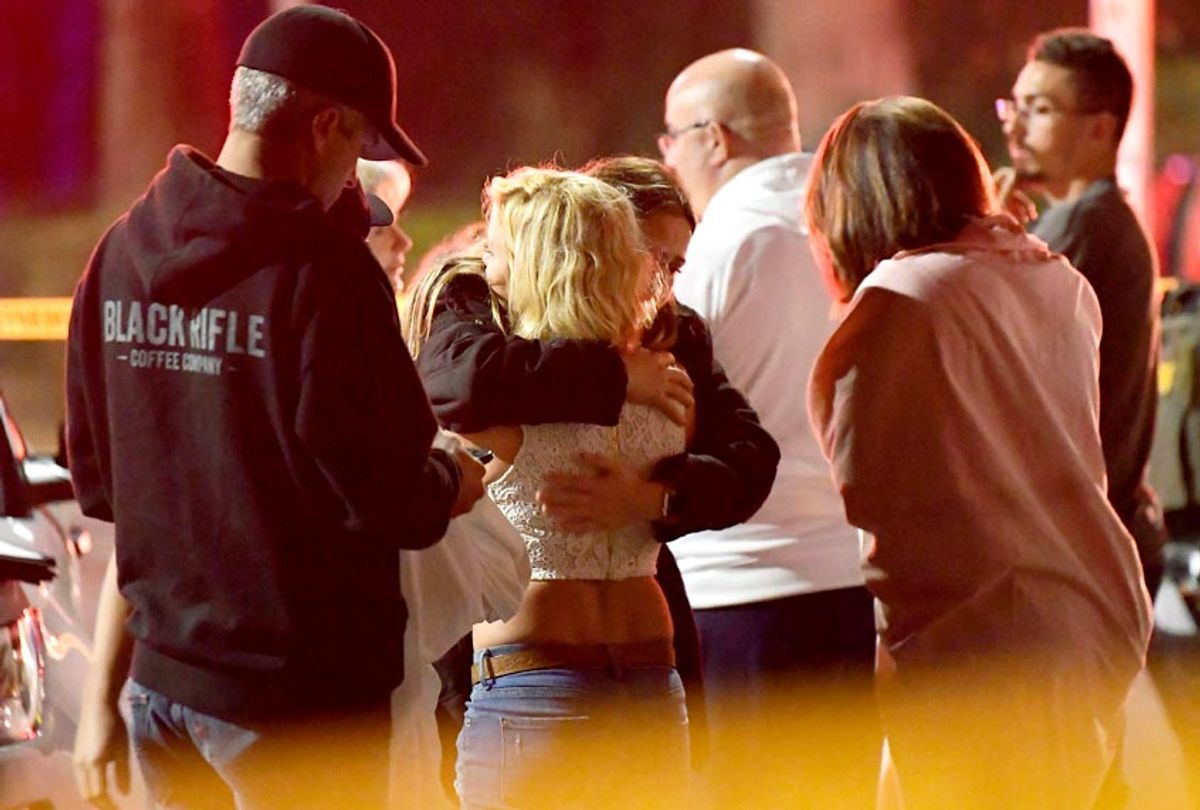 People comfort each other as they stand near the scene Thursday, Nov. 8, 2018, in Thousand Oaks, Calif., where a gunman opened fire Wednesday inside a country dance bar crowded with hundreds of people on "college night," wounding multiple people including a deputy who rushed to the scene. (AP/Mark J. Terrill)
--

With the typically bonkers news cycle going on — Donald Trump firing Attorney General Jeff Sessions, the ongoing midterm election results, a blatantly false controversy involving CNN reporter Jim Acosta — there's a real chance that the latest mass murder, of 12 people at a country music bar in Southern California, will barely register as a blip in the media cycle. Americans have become numb to these mass shootings. We've become numb to being told we're numb to them. They often seem to register emotionally only if they touch on some other hot-button topic, such as the way the Pittsburgh synagogue shooter was motivated by Trump's lies about a refugee caravan in Mexico.

But while our capacity for alarm has been deadened on an emotional level, there's good reason to believe that the public is not simply shrugging off this nonstop horror show. One of the more promising trends of the midterm elections is the indication that the public is moving toward supporting stricter gun safety regulations. Politicians used to shake in their boots at the possibility of being called a "gun grabber," but nowadays, the issue of gun control is a winner, even in traditionally conservative places.

Thursday morning, Republican Rep. Karen Handel of Georgia's 6th congressional district conceded defeat to her Democratic challenger, Lucy McBath, after an extremely tight election. (That's the suburban Atlanta district that drew national attention last year for the special election in which Handel defeated Democrat Jon Ossoff.) This race was a notable one for many reasons, as the district has been a focal point over the debate of whether once deep-red districts in the suburbs are shifting to the left.

McBath rose to prominence as a gun safety advocate after her son, Jordan Davis, was murdered in a Florida parking lot by a white man who took issue with Davis and his friends playing music in their car. She has been out front as a prominent member of Moms Demand Action for Gun Sense in America and rolled her work as a gun safety advocate into her campaign for Congress. By no means is McBath a single-issue candidate, but she was still heavily defined by this issue in the eyes of voters.

But even though her district is still relatively conservative (and mostly white), McBath was able to win as an outspoken opponent of overly loose gun laws. McBath was able to win while being outspoken on an issue that Ossoff, the 2017 special-election candidate, had carefully avoided. That suggests a major shift in the politics of this issue: Supporting gun control may not be a third rail for red state Democrats anymore. It may even, in some contexts, help push them to victory, thanks to suburban women who are sick of fearing that their kids are in danger of random murder by some angry, unhinged man — which is, after all, an experience that McBath has personally endured.

This isn't just about one district, however. As the Daily Bulletin at gun research site The Trace explained, "Democrats earning F ratings from the NRA for their views on gun laws prevailed not only in increasingly blue swing states like Virginia, Nevada, Wisconsin, and Colorado, but also in conservative strongholds like South Carolina and Kansas," demonstrating that the "old logic of Democratic campaign strategists" who said raising the gun issue in competitive districts was suicidal was simply not true in this election.

What's changing? Part of it is undoubtedly that the shooting in Parkland, Florida, and mass shootings in general, have made gun safety as pressing an issue on the left as gun rights have traditionally been on the right. Groups like Moms Demand Action and  Everytown for Gun Safety spent a lot of money and recruited a huge number of volunteers to canvass for their endorsed candidates. That sort of elbow grease should never be underestimated when it comes to affecting electoral results.

There's also reason to believe that guns are not as salient as issue as they used to be on the right. Gun ownership used to be far more widespread in the United States, but has declined in recent years. The majority of Republican voters do not personally own a gun.

To some extent, the symbolic weight of gun rights may be losing its power on the American right. To be blunt, the obsessive gun culture cultivated by the NRA rose up in response to the rise of civil rights, anti-racist movements and feminism. Owning a bunch of guns, and showing them off, became a way for those who feel insecure in the face of threats to white male dominance to re-establish (or at least simulate) a sense of power and masculinity. This is likely why gun sales soar when Democrats are in office, and when conservative white men are feeling especially insecure.

In the age of Trump, however, sublimating these kinds of feelings into symbols and arguments about "freedom" and "self-defense" simply isn't necessary. Our president has no problem being bluntly racist and misogynist, and his supporters follow suit. There's much less need to use gun ownership as a symbolic way to ward off one's fears about women and people of color gaining equality, now that it's more socially acceptable to insult such people openly and call for their oppression. Why spend the money, in an era when "political correctness" isn't holding people back from open bigotry anymore?

Whatever combination of causes have led to this apparent shift, there is reason to believe that the gun control debate that seemed so calcified for so long might actually be changing. It wouldn't be surprising, over the next few years, to see liberals gain the upper hand on an issue where they long believed they had permanently lost.