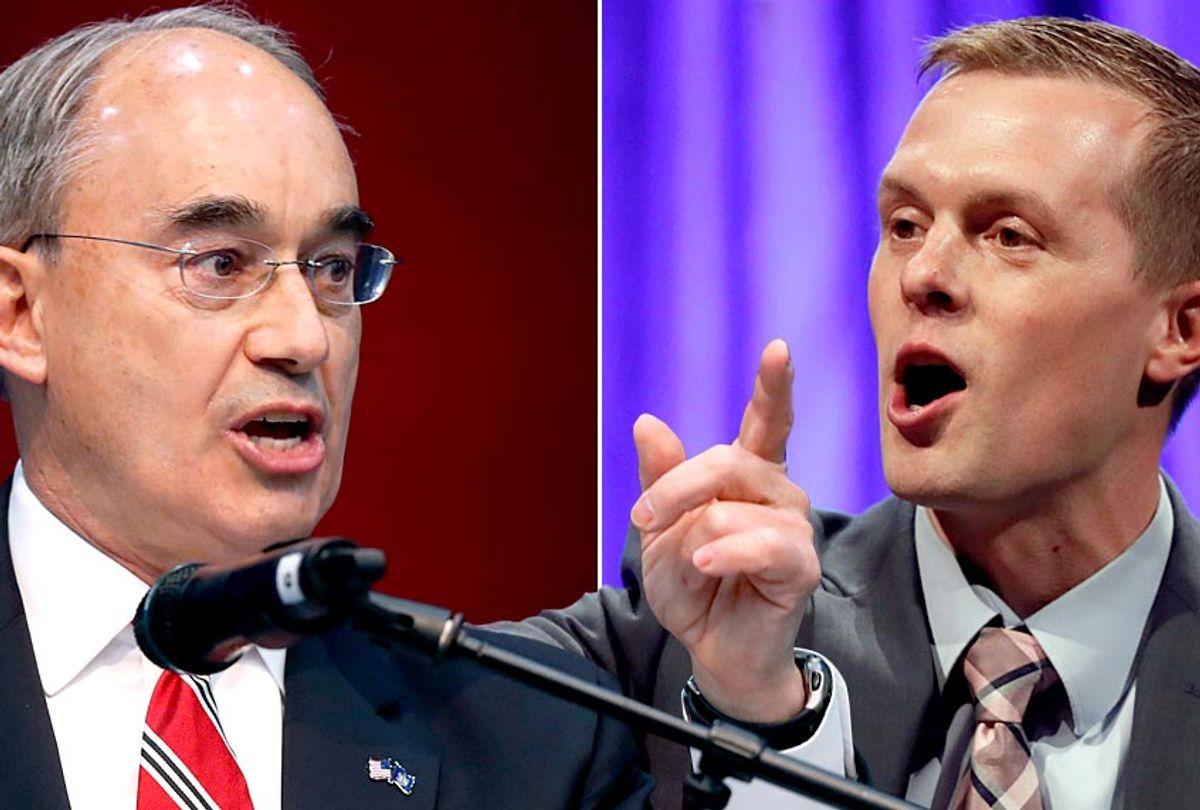 An undecided U.S. House seat in Maine will likely become the first in the country to be decided through ranked-choice voting.

With 92 percent of precincts reporting, Republican Rep. Bruce Poliquin leads Democrat Jared Golden by a 46.1 to 45.8 margin in Maine's largely rural 2nd district – a difference of just 702 votes, the Bangor Daily News reports. Another 8 percent of the vote went to independent candidates in the race.

Voters in Maine are allowed to rank candidates on their ballots under a set of recent voting reforms. Since neither candidate in the race received a majority of the vote, the contest is almost certain to go to an "instant runoff," in which the second choices of voters who backed independent or third-party candidates will be reallocated to the two leading contenders until one of them crosses the 50 percent threshold.

Here's how it works: First the last-place finisher's votes are allocated, then those of the candidate who finished next t0 last, and so on. If neither of the top candidates breaks the 50 percent, the process continues until all of the votes are assigned to the top two vote-getters.

The race featured two left-leaning independent candidates, attorney Tiffany Bond, who received nearly 6 percent of the vote, and teacher William Hoar, who got more than 2 percent of the vote. So it is highly plausible, although by no means certain, that Golden -- a 36-year-old Marine combat veteran -- will overtake Poliquin.

Secretary of State Matt Dunlap's office said that it is impossible to know how long the process will take, since this is the first time ranked-choice voting has been implemented in Maine. Indeed, it has never been used in a congressional race anywhere in the country. Dunlap spokeswoman Kristen Muszynski told the Bangor Daily News it could take around two weeks to sort through the ballots.

Golden, who is assistant majority leader in the Maine legislature, has said he will accept the results of the ranked-choice election. Poliquin, the Republican incumbent, has declined to comment on whether he would do the same. The method has not been court-tested in the general election, though the state's Supreme Court and a federal court allowed it to proceed in the state's primaries.

Sen. Angus King, an independent who caucuses with Senate Democrats, and Rep. Chellie Pingree, a Democrat who represents Maine's 1st district, easily won their elections in the first round, getting the majorities they needed to avoid the allocation of second-choice votes.

Outgoing Maine Gov. Paul LePage has urged Poliquin to challenge the results of the election if he wins the first round but loses the ranked-choice count, arguing that the method is unconstitutional.

That remains to be determined. Maine's Supreme Court issued an advisory opinion last year saying it was unconstitutional to require state general elections to be won by majorities rather than pluralities of the vote, but it did not rule on federal elections like this House race. No other state has attempted ranked-choice voting in state or federal elections, though a number of cities, including San Francisco, have used the method in mayoral races.

The system was approved by Maine voters in 2016 after a series of elections in which winning gubernatorial candidates failed to get a majority of the vote. Supporters of the method argue that it allows voters to choose the candidate they prefer most without worrying that their choice will have a spoiler effect. Ironically, the system was not used in Tuesday's gubernatorial or state legislative races because of the court's opinion that it would violate the Maine constitution.