Ever wondered how the Fab Four might have made their White Album with today's technology? Wait no longer 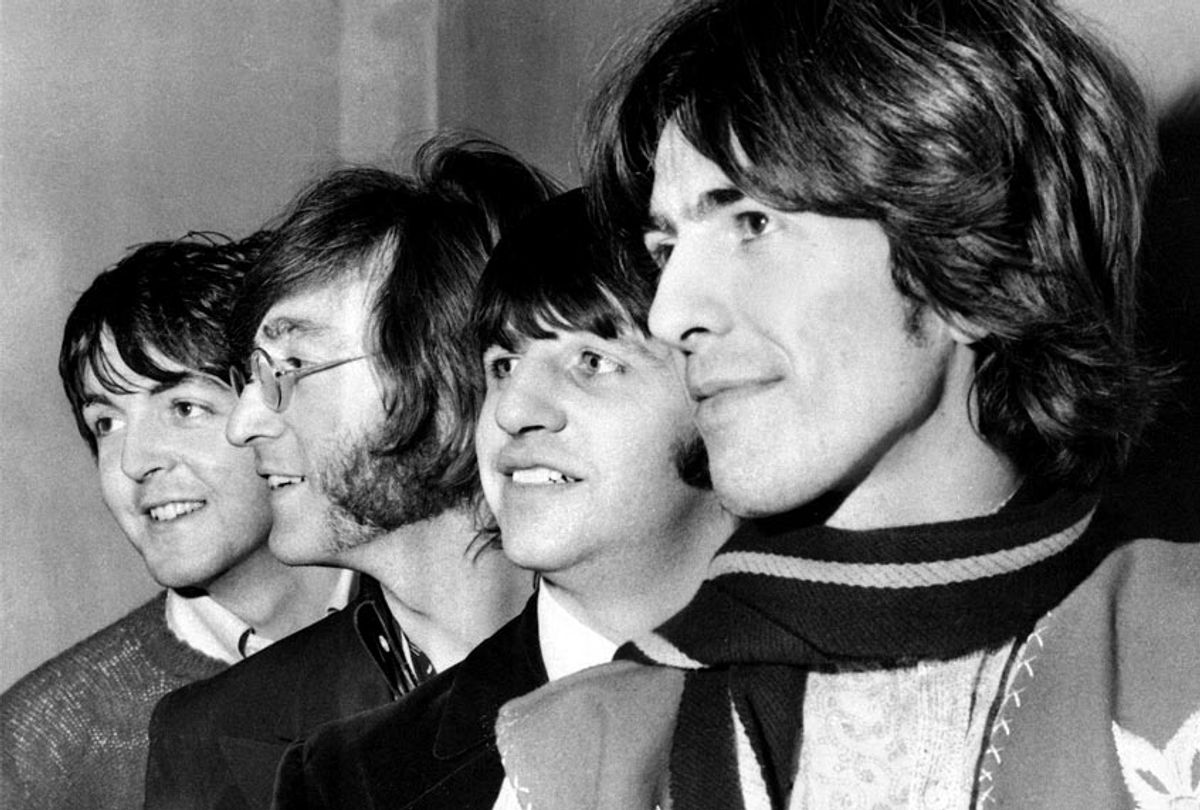 We live in the golden age of remixed and remastered box sets, with the doyens of classic rock leading the way. In the past few years alone, music lovers have been treated to deluxe editions from such stalwarts as Bob Dylan, Led Zeppelin and Pink Floyd. As it happens, the standard-bearers in this evolving cottage industry may just be the Beach Boys, who have all but emptied the vaults in order to quench their fans’ unchecked desires for new content. In 2011, Capitol Records released the Beach Boys’ "Smile Sessions," which features nearly 400 minutes’ worth of archival material and outtakes. A completist’s wet dream, "The Smile Sessions" include nearly two dozen variations of megahit “Good Vibrations” alone. Talk about getting the excitations, indeed.

But then there is the glaring issue of the Beatles. When it comes to these latter-day forays into lavish repackaging, the Fab Four have been notoriously late to the party. While the Beatles produced one landmark, world-breaking album after another during their 1960s heyday, they have taken a consistently cautious approach when it comes to sharing their blue-chip wares in the digital age. In 1987, the group finally released their original albums on compact disc, belatedly bringing their catalogue to the marketplace some five years after the CD paradigm shift had assaulted the record industry. By the time the Beatles showed up, nearly all of the band’s classic rock peers had made the transformation and reaped the attendant benefits.

Years later, when the industry had shifted yet again, transitioning from physical product to music streaming services like iTunes and Spotify, the Beatles pointedly lagged behind once more, with untold millions of downloads occurring outside of their ken. Finally, in October 2009, the Beatles released remastered editions of their entire back catalogue and made their digital streaming debut on iTunes — some six years after the online music store had opened up shop.

While the Beatles’ tardiness may seem like a blunder of monumental proportions — and there’s little question that significant profits were lost to pirates during the early years of the 21st century — the group’s longstanding restraint has also been the result of a well-honed strategy. By waiting out their competitors, the Beatles have created an event culture in which the chestnuts of their catalogue are reintroduced to the marketplace on a grand scale. With each new format change, Apple Corps is able to ensure that the Beatles enjoy an uncluttered stage in which their masterworks shine brightly, unchallenged by competing artists for their exalted place in the spotlight. If anything, their slow road to the world’s virtual sales floors may have served to heighten their mystique.

And the results speak for themselves: In 1987 and 2009, several of the Beatles’ CDs succeeded in penetrating the upper reaches of the Billboard album charts. In May 2017, when the Beatles released a deluxe edition of "Sgt. Pepper’s Lonely Hearts Club Band," newly remixed in celebration of the album’s bravura 50th anniversary, they finally joined the box-set revolution. In addition to the remixes, "Sgt. Pepper" was released with an assortment of outtakes and sketches on the road to finished masterpieces. For Beatles fans — long used to scouring bootleg releases for these snapshots of the Fab Four’s creative process — the "Sgt. Pepper" bonanza was literal music to their ears. In short order, the new edition swiftly became an international bestseller.

Which brings us to "The Beatles," popularized as The White Album within days of its first appearance in record stores. Originally released in November 1968, the double album marked the band’s boldest, brashest, most bombastic LP across their storied career. Chockfull with 30 songs, The White Album made for an intentionally unsettling marriage of opposites: beauty and crudity, sublimity and blankness, harmony and cacophony. Where "Sgt. Pepper" had been brimming with pomp and Technicolor, The White Album was alive with awe-inspiring grace and soul-destroying darkness.

Slated for a November 9 release, The White Album remix was no easy feat for Giles Martin and Sam Okell, the production team tasked by Apple Corps with bringing the project to fruition. Beatles fans are hungry for new content, but at the same time, we hold our own decidedly imprecise expectations for what a remixed package should sound and feel like.

For Martin, the youngest son of famed Beatles producer George Martin, meeting this criterion is central to the box set’s potential for success. To his credit, Martin understands implicitly that remixing the sacred sounds of the Beatles involves walking a very dangerous tightrope between giving The White Album a sonic tune-up and doing everything possible to avoid unnecessary meddling into the group’s original artistic intentions.

Martin intuitively recognizes that listeners have long histories with Beatles tracks, which means that we expect them to provide us with a very specific experience. “I want the tracks to sound good,” Martin told me at a September listening session at New York City’s Power Station, but also to “make you feel a certain way.” After all, when it comes to the musical touchstones in our lives, we hold strong preconceptions about how they will sound — that they will convey the sensory experience that we have always come to expect from the original recording.

So how, then, do you go about the vague business of capturing a sense of feeling, of emotional reaction and comforting familiarity, with a remix? For Martin and Okell, this meant approaching their project with a light touch. To this end, they adopted a working philosophy that a remixed "White Album" should be the explicit product of how the Beatles themselves likely would have shaped The White Album with the benefit of 21st century studio technology.

And that newfangled "White Album" would clearly benefit from the wider sound fields available in the digital age. For the most part, The White Album was originally recorded with four-track technology. During the latter stages of the LP’s production, the Beatles famously heisted one of EMI Studios’ experimental eight-track machines and produced several tracks with that more expansive sound palette.

With their remixed "White Album," Martin and Okell have deftly deployed state-of-the-art technology to render the sonic field even more vast, establishing better separation among the Beatles’ instrumentation. In so doing, they have substantially reduced the muddiness that existed when, say, the bass and drums coalesced among a given track’s low end. The resulting sonic definition — as with last year’s "Sgt. Pepper" remixing triumph — is a revelation.

Take George Harrison’s “Long Long Long,” for example. For many listeners — present company included — “Long Long Long” was a ho-hum affair, a quiet trifle as the heavy metal roar of “Helter Skelter” subsides in the distance. With the remix, Harrison’s song enjoys even greater dramatic proportions, with the song’s enhanced instrumental definition affording it with new textures and a previously unrealized, even startling sense of power.

Meanwhile, the ethereal beauty of John Lennon’s “Dear Prudence” shines even brighter, with the song’s finger-picked guitar preface glistening like you’ve never heard it before. And when it comes to The White Album remixes, this aspect takes us to the heart of the matter: with a wider sonic palette, these recordings are finally able to breathe and allow us to experience deeper layers of sound that lay dormant and compressed in the original mix.

While songs like Paul McCartney’s “Blackbird” and “I Will” reveal new textures of their own, his hard-rocking “Helter Skelter” and bluesy “Why Don’t We Do It in the Road?” thunder forth with new senses of passion and bite. Likewise, the latent terror that lives in the dark nucleus of tracks like Lennon’s “Yer Blues” and “Revolution 9,” that vast and experimental exercise in musique concrète, will find the listener shuddering in recognition at The White Album’s nightmarish inner core.

Which brings us to the box set’s outtakes and other assorted extras. Fans looking forward to finally hearing the 27-minute version of “Helter Skelter” — the Holy Grail of "he White Album’s unreleased outtakes — will be sorely disappointed, forced to settle for take two of the notorious track, which clocks in at nearly 13 minutes.

But as far as outtakes go, there is still plenty to be admired. Martin and Okell have provided crisp, masterful versions of all 27 of the so-called Esher demos, which were famously compiled by the bandmates in May 1968 at Kinfauns, Harrison’s home outside of London. (For those keeping track of such things, the demo of “Sour Milk Sea” here is an alternate, previously unheard recording). And then there’s Harrison’s “While My Guitar Gently Weeps,” which listeners can experience from demo form through the final session as Eric Clapton performs his evocative guitar solo for the ages.

Some fans may decry the absence of “Revolution” take 20, an epic, ten-plus minute mix which appeared on bootleg in 2010 and serves as a spellbinding missing link between “Revolution 1” and “Revolution 9.” But take 18 — the same track as the bootlegged version, minus some key overdubs — is full of its own chaotic surprises. Elsewhere, a version of “Helter Skelter” taped a few takes before the master is a real kick, driven by McCartney’s spirited, occasionally wordless guide vocal.

There are plenty of tender moments in the box set, too, including a moving acoustic version of “Good Night,” with Ringo Starr and his bandmates singing the album’s climactic song in gentle harmony. A later take, with only George Martin on piano and Starr singing plaintively while Harrison keeps time with a shaker, was first released on the Beatles’ Anthology in edited form, but appears complete here — simple and perfect. Fans will no doubt swoon over an early version of McCartney’s “Let It Be,” which had begun gestating during the latter stages of :The White Album"’s production. McCartney’s audible exuberance at having discovered this new gem is breathtaking, as is a later moment when Lennon struggles with the exquisite “Julia” as George Martin encourages him from his place in the control booth above the studio floor. The exchange between the two old friends offers a heartfelt reminder about the innately human relationships that made the Beatles’ extraordinary achievements possible.

Simply put, The White Album remixes are a marvel — and especially when it comes to the 5.1 surround-sound versions, which could easily fill up a concert hall with the warmth and fidelity of their sonic sway. Or, perhaps better yet, they might be more properly enjoyed in your living room, where you can fully lose yourself within the album’s mesmerizing sonic embrace.

With The White Album remixes, the Beatles remind us of the many and pleasurable ways in which everything old can be rendered new again. For this listener, the box set demonstrates the enduring profundity of the group’s otherworldly sound, which still manages to reveal new treasures — impossible as it may seem — even 50 years later.