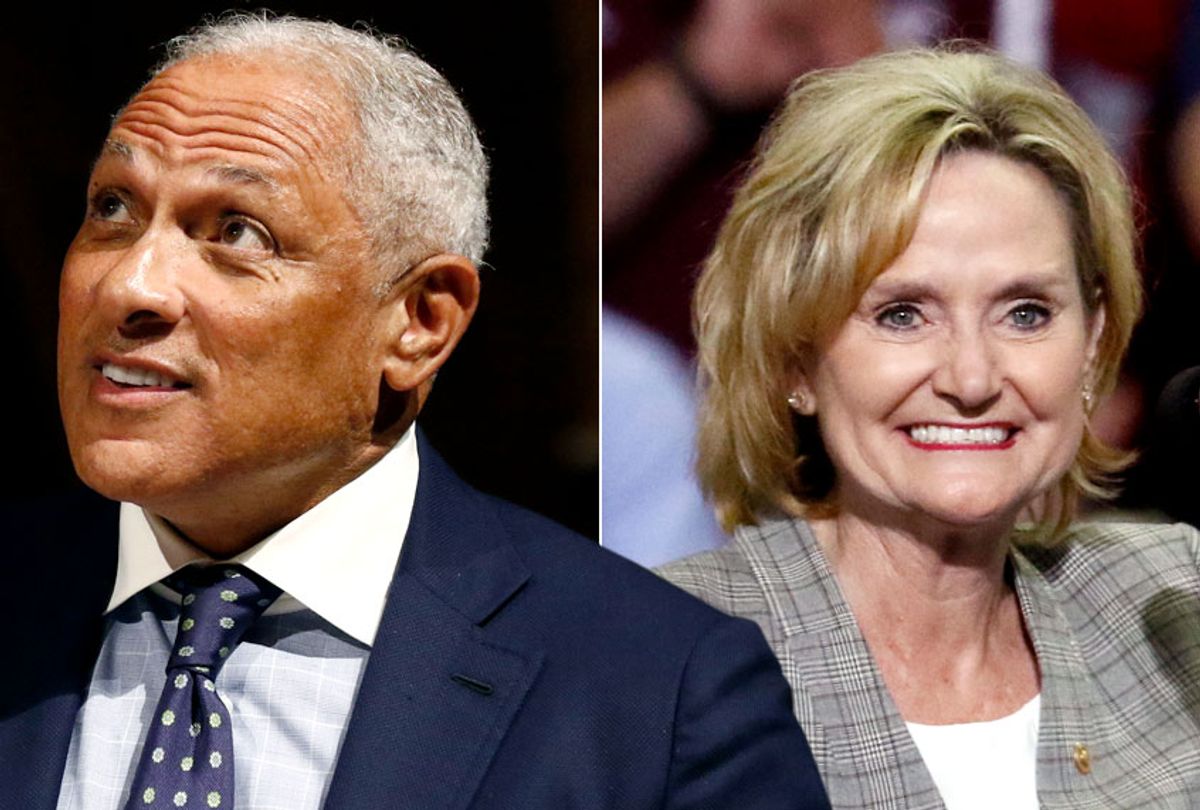 Mississippi Democrat Mike Espy, who faces a runoff election in the state against Republican Sen. Cindy Hyde-Smith, called his opponent's recent comments about attending a public hanging "hurtful and harmful."

"This is 2018," Espy said during a Monday morning appearance on CNN. "We need leaders who will try to unite us and not divide us," and Hyde-Smith's comments, he argued, "reinforce the stereotypes that have held back our state."

Espy's comments come one day after a video clip featuring his Republican opponent went viral on social media, in which she says she would be "on the front row" at a "public hanging."

"If he invited me to a public hanging, I'd be on the front row," Hyde-Smith said while laughing, drawing more laughter from the crowd during a campaign stop in Tupelo, Mississippi earlier this month.

The video was posted by Lamar White Jr., the publisher and founder of The Bayou Brief, a nonprofit news organization in Louisiana. White told Mississippi Today that he did not take the video, which he said was recorded on Nov. 2 — four days before Election Day.

As of this writing, the video has been viewed over 3 million times on Twitter and nearly 250,000 times on Facebook.

Mississippi has a long history with racism that includes 581 lynchings between 1882 and 1968 — the most of any U.S. state in that period, according to the NAACP.

Hyde-Smith, who is vying to fill the final two years of the Senate term she was appointed to fill by Republican Gov. Phil Bryant after longtime Republican Sen. Thad Cochran resigned due to health issues in April, disregarded the comment in a statement Sunday night.

"In a comment on Nov. 2, I referred to accepting an invitation to a speaking engagement," Hyde-Smith said. "In referencing the one who invited me, I used an exaggerated expression of regard, and any attempt to turn this into a negative connotation is ridiculous."

Espy called Hyde-Smith's remarks "reprehensible" and said they demonstrate why she is unfit to represent the Magnolia State in a statement Sunday. He added that Hyde-Smith's comments "have no place in our political discourse, in Mississippi, or our country. We need leaders, not dividers, and her words show that she lacks the understanding and judgment to represent the people of our state."

NAACP president and CEO Derrick Johnson, who is from Mississippi, said in a statement that Hyde-Smith's "decision to joke about 'hanging,' in a state known for its violent and terroristic history toward African Americans is sick." Johnson called Hyde-Smith's remarks "shameful" and said they "prove once again how Trump has created a social and political climate that normalizes hateful and racist rhetoric."

"To envision this brutal and degenerate type of frame during a time when Black people, Jewish People and immigrants are still being targeted for violence by White nationalists and racists is hateful and hurtful," he concluded.

Hyde-Smith's comments echo a similar instant in Mississippi. In May 2017, Republican state lawmaker Rep. Karl Oliver came under intense scrutiny after he recommended lynching for people who removed Confederate monuments in a Facebook post.

Hyde-Smith has received an endorsement from President Donald Trump, who campaigned for her last month in Mississippi.

Because neither Hyde-Smith nor Espy garnered more than 50 percent of the vote on Election Day — both received slightly more than 40 percent — the race advanced to a runoff on Nov. 27, which polling predicated.

Hyde-Smith was the state's agriculture commissioner and a Mississippi state senator. She served as a Democrat until 2010, when she switched to the Republican Party. She has since touted her conservative stances on issues like abortion, immigration and gun rights. After taking her current Senate seat, Hyde-Smith became the first woman to represent Mississippi in Congress.

Espy, meanwhile, would become Mississippi's first black senator since Reconstruction. Throughout the campaign trail, Espy touted his federal-level experience, which comes with some baggage. The 64-year-old Democrat previously served in the House of Representatives for six years before going on to serve as President Bill Clinton's secretary of agriculture from 1993 to 1994. Espy was forced to step down amid an ethics probe of allegations that he improperly accepted airplane and sports tickets. He was eventually acquitted on all charges. The Mississippi Democrat has been out of public office for nearly 25 years, spending the past decade as a private attorney.