Our buildings could help reverse global warming, instead of being a major cause

Concrete isn’t going away anytime soon, but we can engineer it to store more carbon 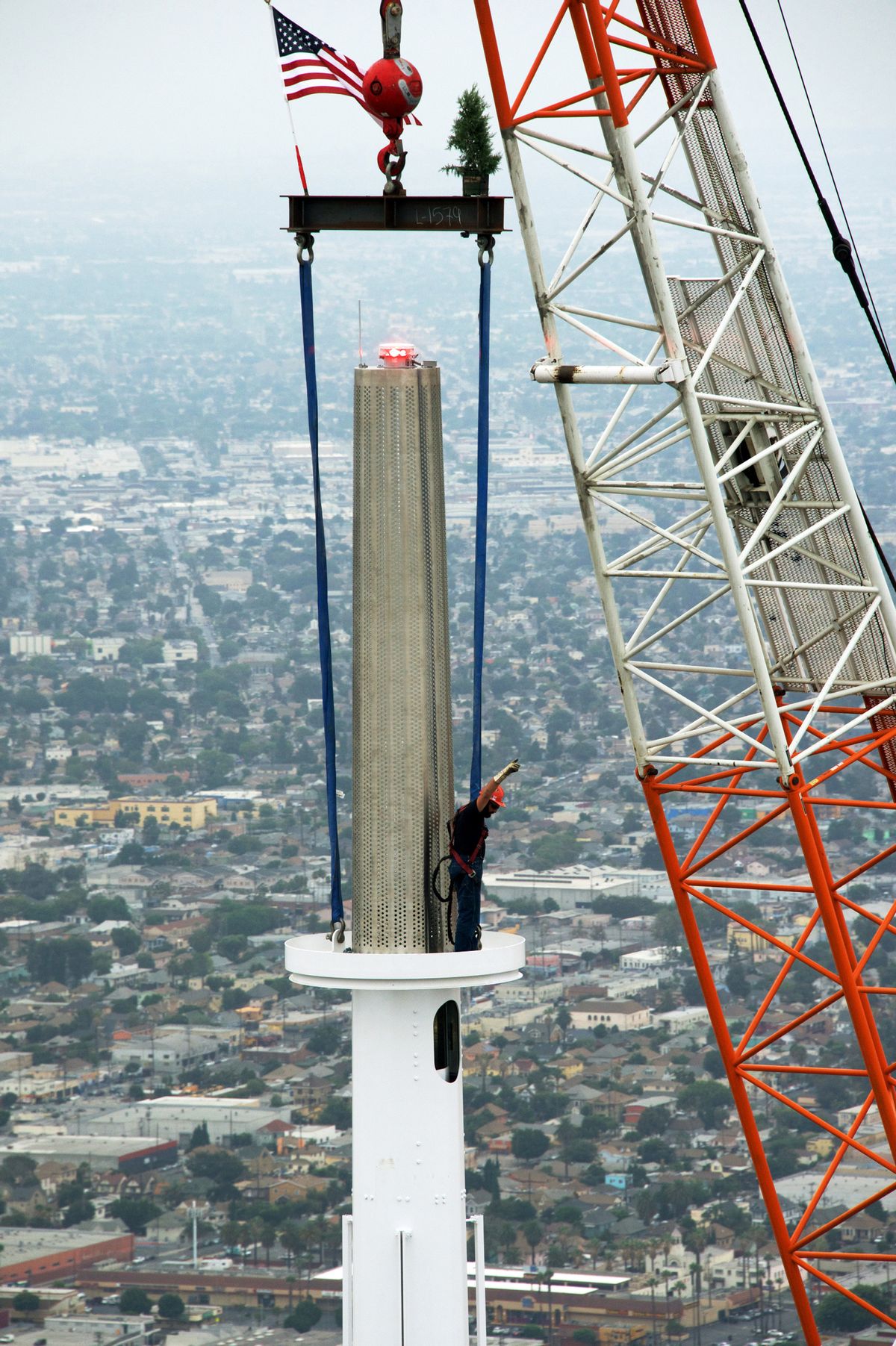 In this photo provided by the Wilshire Grand Center, a worker signals as a crane hoists a beacon into place atop a 160-foot spire on the Wilshire Grand Tower early Saturday, Sept. 3, 2016, in downtown Los Angeles. The 10-ton spire makes the structure the tallest building west of the Mississippi River. The $1 billion hotel and office complex is scheduled to open next March. (Gary Leonard/Wilshire Grand Center via AP) (AP)
--

Look around as you go through your day and chances are, you’ll be surrounded by concrete. Worldwide, concrete is the most prevalent building material, but it is detrimental to the environment, contributing significantly to greenhouse gas emissions during the production phase. In fact, cement (a main ingredient in concrete) is the second highest industrial source of carbon dioxide on the planet.

Even though concrete is bad for the environment, it has some advantages. Engineers like concrete because it is durable, requires little maintenance, and gains strength with time. Additionally, it can easily be made into a variety of shapes, is usually the cheapest option, and is made from raw materials that are globally available. In other words, we won’t stop using concrete in the near future.

But the situation might not be as grim as it sounds: concrete can absorb carbon dioxide and store it permanently, a process known as carbon sequestration. The absorption occurs at different rates depending on the particular mix of concrete, which is made of water, cement, and sand, rock, or gravel.

Historically, scientists assumed that the amount of carbon dioxide concrete removed from the atmosphere was tiny compared to the gas emissions associated with manufacturing it. However, they hadn’t actually tested that assumption until now. A recent study from researchers at University of Colorado (CU) Boulder showed that concrete buildings actually “clean up” some of the mess they make in our atmosphere! Jay Arehart, one of the study’s authors, explained that the major motivation for this study was to figure out exactly how much buildings can offset their emissions. He said, “Currently, the built environment is responsible for 40 percent of the United States’ carbon emissions. What if the built environment could sequester and store carbon, becoming part of the solution to reversing global warming instead of being a main cause?”

Adriana Souto-Martinez, graduate student and lead author of the CU Boulder study, and her team wanted to find out how much carbon could be sequestered by theoretical concrete mixes over time. What they found was shocking compared to past estimates of concrete emissions and sequestration: 19 percent of carbon dioxide emitted by creating concrete can be re-absorbed throughout the concrete’s lifetime.

The researchers quantified concrete carbon sequestration of 30 different theoretical concrete mixtures. In reality, there are endless recipes that can be used to make concrete, but they chose a limited number based on commonly-used mixtures in building infrastructure. Then they conducted a lifecycle assessment (LCA), which estimates the environmental impacts associated with all stages of a concrete’s life, from raw material extraction through cement processing, distribution, use, repair and maintenance, and disposal or recycling. The authors used an LCA to calculate total carbon dioxide emissions from each of the 30 different concrete mixtures. Finally, they used computer models to find the total estimated carbon sequestration. One of the critical findings from this modeling is that stronger concretes exhibited lower total emissions compared to weaker mixtures, which hasn’t been the case for many previous LCAs.

This new sequestration estimate depends on engineering parameters like cement type and the shape of the concrete, but it’s an important starting point for this research. Architects and structural engineers make critical decisions regarding the design and specification of concrete mixtures that take environmental impacts into account, but they used to make those choices without any data on concrete’s carbon sequestration. In addition to quantifying an average sequestration estimate, Souto-Martinez’s study provides the missing data that architectural engineers can use to weigh their options. For example, pieces of concrete that sequester the most carbon do not always emit the smallest amount of greenhouse gases.

Although concrete is not the most environmentally-friendly building material, this study shows that it’s not quite as bad as we thought. Studies like this are a starting point for developing more sustainable concrete structures. Because concrete is a major contributor to climate change, changing the way we make concrete will go a long way in helping us maintain both a healthier natural environment and a robust built environment.