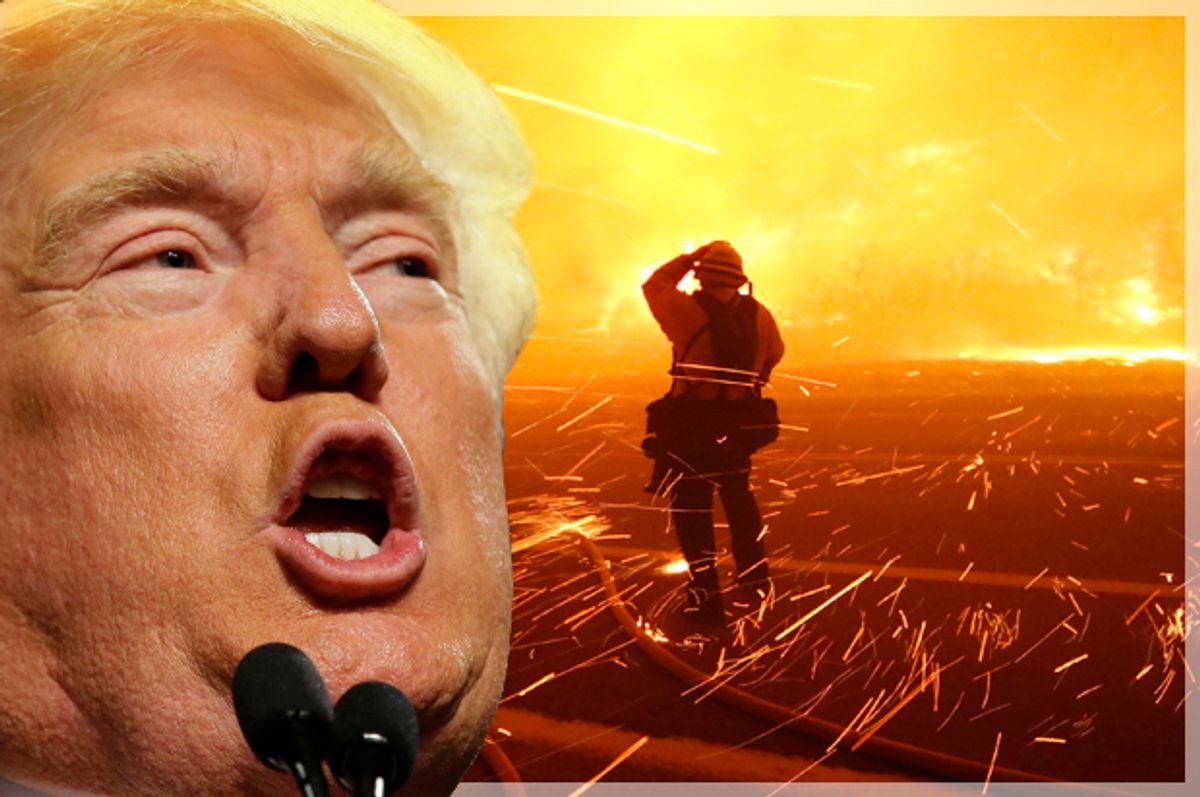 President Donald Trump is facing harsh criticism over a recent tweet that seemed to blame the State of California for the recent spate of wildfires.

"There is no reason for these massive, deadly and costly forest fires in California except that forest management is so poor," Trump tweeted on Saturday. "Billions of dollars are given each year, with so many lives lost, all because of gross mismanagement of the forests. Remedy now, or no more Fed payments!"

On Sunday he reiterated those sentiments in a tweet that declared, "With proper Forest Management, we can stop the devastation constantly going on in California. Get Smart!"

But by Monday, perhaps in an effort to save face, Trump was backtracking.

He tweeted that "the California Fire Fighters, FEMA and First Responders are amazing and very brave. Thank you and God Bless you all!"

As of Sunday, the Butte County fire had caused 29 confirmed deaths with at least 228 people having their whereabouts remain unknown, according to the Los Angeles Times. Considering the magnitude of the tragedy, it is hardly surprising that many Californians reacted with contempt to the president's message.

"The president's message attacking California and threatening to withhold aid to the victims of cataclysmic fires is ill-informed, ill-timed and demeaning to those who are suffering as well as the men and women on the front lines," wrote  President Brian Rice in a statement. "At a time when our every effort should be focused on vanquishing the destructive fires and helping the victims, the president has chosen instead to issue an uninformed political threat aimed squarely at the innocent victims of these cataclysmic fires."

California Rep. Adam Schiff, a Democrat, expressed similar thoughts on "Meet the Press," explaining that "he is only the president, I think in his view, of those who voted for him. The rest, he could care less."

JUST IN: Rep.-Elect @HarleyRouda slams President Trump's comments on the #CaliforniaFires as a "tremendous disappointment" -- "This is a time to... show you have one ounce of empathy... these Tweet tantrums that show him as a temperamental small child have to stop." #CheddarLive pic.twitter.com/SU5hWOOvoh

Celebrities have also chimed in to echo the thoughts of public servants like Rice, Schiff and Rouda.

Another comedian, Zach Braff, tweeted that he "honestly thought this one was from a parody account. The city is on fire and people and animals are dying."

Singer Katy Perry also expressed dismay with Trump's comments, writing that "this is an absolutely heartless response. There aren’t even politics involved. Just good American families losing their homes as you tweet, evacuating into shelters."

John Legend expressed his contempt for Trump with a tweet that said, "Our National Embarrassment can't bring himself to show some empathy to Californians dealing with a horrific disaster," according to Billboard.

He later added, "Please show love and compassion right now for all affected in California. I’m broken from this."