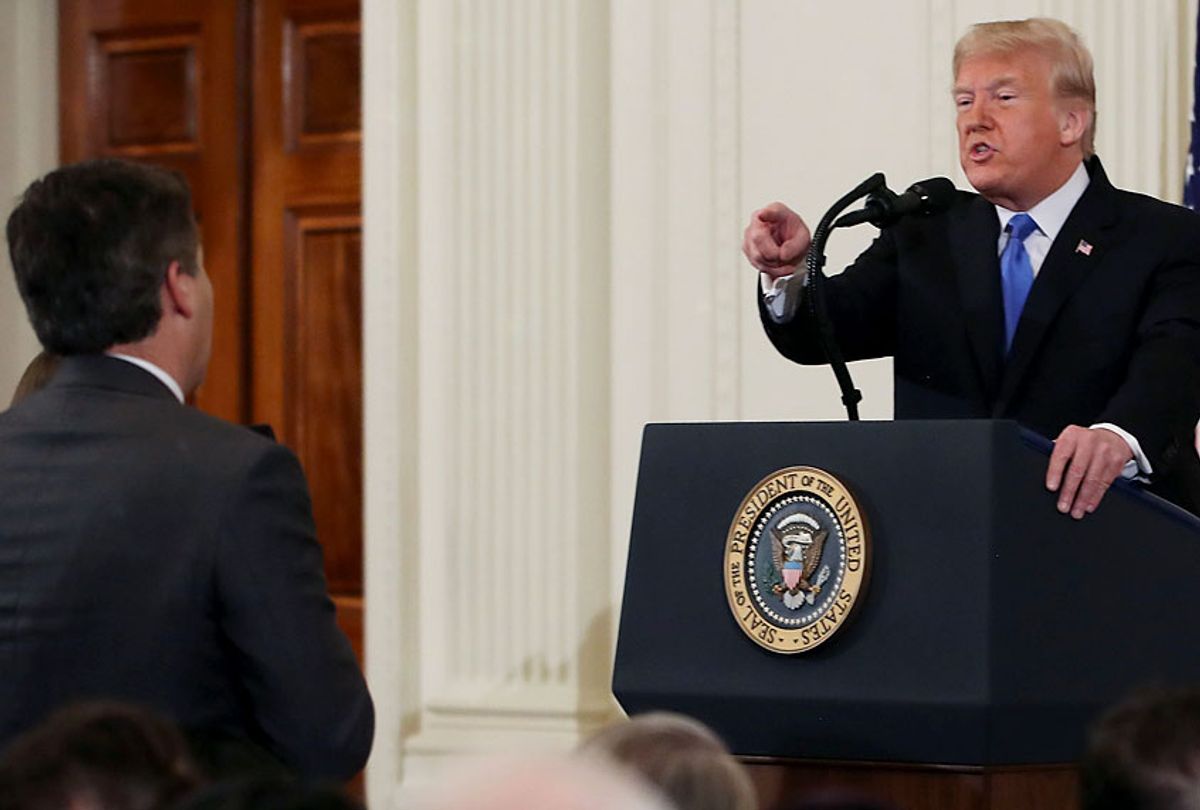 Donald Trump gets into an exchange with Jim Acosta of CNN after giving remarks a day after the midterm elections on November 7, 2018 in the East Room of the White House. (Getty/Mark Wilson)
--

The complaint — which lists as defendants the president, Chief of Staff John Kelly, Deputy Chief of Staff Bill Shine, Press Secretary Sarah Huckabee Sanders, the United States Secret Service and Director of the United States Secret Service Randolph D. Alles, as well as an unidentified Secret Service Agent — claims that "on November 7, 2018, Defendants revoked Acosta’s White House credentials because, in the President’s own words, Acosta failed to 'treat the White House with respect' at a White House press briefing." After describing that decision as the "culmination of years of hostility by President Trump against CNN and Acosta based on the contents of their reporting," the suit argued that it was tantamount to censorship because of Trump's larger war of words against the media. It specifically cited one Trump interview in which "the President explained to Lesley Stahl of 60 Minutes: 'You know why I do it? I do it to discredit you all and demean you all so when you write negative stories about me no one will believe you.'"

The complaint also detailed how the video of Acosta seemingly putting his hands on a woman trying to take away his microphone, one that had been cited by the White House as justification for revoking his hard pass, had been "apparently doctored" and that there are reports that the video "came from a contributor to InfoWars, an organization whose 'conspiracy theories and hateful content' have led to it 'being banned earlier this year by most major social media platforms.'"

In an official statement, White House Correspondents Association President Olivier Knox expressed unequivocal support for CNN's lawsuit. After asserting that the White House should not have taken away Acosta's press credentials in the first place, Knox argued that "revoking access to the White House complex amounted to disproportionate reaction to the events of last Wednesday. We continue to urge the administration to reverse course and fully reinstate CNN's correspondent."

Knox added, "The President of the United States should not be in the business of arbitrarily picking the men and women who cover him."

The incident which resulted in Acosta losing his credentials began last week when the CNN reporter asked Trump about the ongoing investigation of special counsel Robert Mueller. After Trump ordered Acosta to put down the mic (which was eventually taken away by the female assistant featured in the doctored video), the president proceeded to berate him.

"CNN should be ashamed of itself having you working for them. You are a rude, terrible person who should not be working for CNN," Trump told Acosta.

CNN's lawsuit against Trump has been assigned to Judge Timothy J. Kelly, a Trump appointee.

"Each court has a written plan or system for assigning cases. The majority of courts use some variation of a random drawing," according to the site. "Courts also have a system to check if there is any conflict that would make it improper for a judge to preside over a particular case."