CNN is suing the White House over Jim Acosta's press pass. That's a fine idea, but collective action is needed 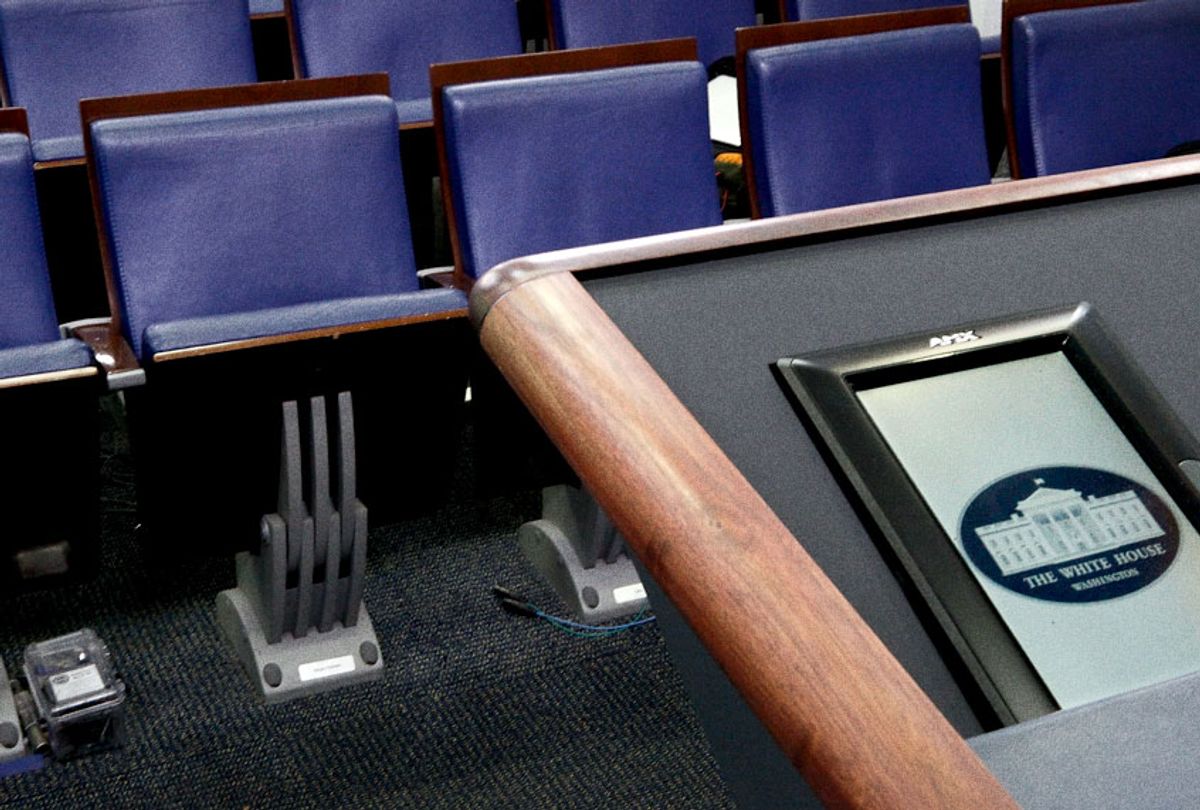 After days of hinting about it, CNN has finally pulled the trigger, suing the White House for creating a laughably fake pretense to bar reporter Jim Acosta from the White House press pool. Acosta has long been a thorn in Donald Trump's side, largely because of his willingness to ask aggressive questions about Trump's racism and likely because he backs up those questions with a Spanish last name, a known trigger for the self-described "nationalist" president. So when Acosta's arm incidentally brushed against a female intern who was trying to wrestle the microphone from him as he asked Trump uncomfortable questions, the White House pretended to believe this was some kind of assault and pulled Acosta's credentials.

"The wrongful revocation of these credentials violates CNN and Acosta's First Amendment rights of freedom of the press, and their Fifth Amendment rights to due process," CNN said in a statement about the lawsuit.

Suing the Trump administration is a fine idea, so long as it doesn't continue to draw out this pointless "debate" about what is obviously true, which is that Acosta did nothing wrong. But this move shouldn't be mistaken for courage, much less effective action to stand up for the value of free and fair journalism. More needs to be done.

It's wildly unpopular among journalists for me to say this, but it's important: The White House press corps needs to boycott the White House press briefings. And not just until Acosta's credentials are restored. They need to stay away as long as the administration continues to tell lies, which will almost certainly be until Trump boards the helicopter and leaves the White House to the next president.

Calls for this boycott have been intensifying, but the defensive retorts from journalists have been just as intense. Apparently they can't imagine being able to do their jobs without sitting in a room and watching Sarah Huckabee Sanders act put out that people don't like being lied to for an hour.

"The White House is a lousy source of information about itself, but it is also the best available source," New Yorker writer Masha Gessen argued last week. "It would mean walking away from politics altogether, which, for journalists, would be an abdication of responsibility."

High-minded language, but flat out false. The White House press briefings exist not to share any information, but to share disinformation. Sanders rarely tells the truth, and when she does, it's either accidental or mundane information with no real news value. Trump himself lies even more, and often just for the hell of it — perhaps to make the point that he can lie about obvious things and still not lose power.

Moreover, Trump's administration has always seen press briefings not as an opportunity not to share information but as a demonstration of power, in this case the power to hoodwink the media into sharing obvious lies and not pay any penalty for doing so. On his first day at work, Trump's first press secretary, Sean Spicer, literally told the press that Trump's inauguration was bigger than Barack Obama's, though photos of both events clearly showed this to be a lie.

While the media dutifully debunked the lie, it didn't matter for the people that Trump was trying to reach, his own supporters. Instead, supporters chose to believe Trump's lie and grew angry with the press for insisting on the truth — which, in turn, serves Trump's goal to train his base to hate the media and view them as disloyal and treacherous.

Trump's principal talent, besides shamelessness, is understanding the dynamics of cheesy reality TV conflicts, something he learned from hosting "The Apprentice." Subsequently, the White House press briefings have been shaped around creating reality TV-style spectacles. Sanders or Trump will troll reporters, trying to create a dramatic confrontation, which usually works. This creates a rooting interest, as in a sports event, with liberals rooting for the press and conservatives -- ready to hate anything liberals like -- growing ever more hostile to the very idea of the news media.

This is why press briefings, which used to be daily or near-daily occurrences in previous administrations, have become increasingly rare. Weeks will pass without one nowadays. The White House sees no need to share information with the press. It only holds press briefings when facing unflattering news stories that might make some wobblier Trump voters start to nurse doubts about supporting a flagrant woman-hating grifter. The point is almost always to create a conflict that refocuses the base's attention on hating liberals and the media, and away from whatever story they don't want them thinking about.

The pattern is pretty clear. Sanders had a press conference on Oct. 3, in the middle of a news cycle in which Trump was exposed for criminal tax fraud by the New York Times and recorded mocking an alleged sexual assault victim. Sanders called a press conference to pick a rhetorical slap fight with Acosta and lie about the New York Times, calling it "a very boring 14,000-word story" and a "false attack." No real information was shared, but the White House message of hate and distrust for the press was widely aired.

The one before that was Sept. 10, in which Sanders wasted everyone's time with a laughable lie about Trump believing in rule of law, which was in sharp contrast with Trump himself publicly indicating that he believed then-Attorney General Jeff Sessions should refuse to investigate Republicans.

That the White House continues to lie shamelessly is newsworthy, of course, but there are ways to report on that without participating in the the reality-TV theatrics of White House press briefings. The White House lies in all its communications, from press releases to the incoherent nonsense Trump spews at reporters when they catch up with him in transit. There's no need to play into the White House's strategy of using televised drama to drum up more loathing of the press among Trump's base.

To be clear, I doubt that the outlets in the White House press room will heed my advice to walk away. But don't believe their high-minded defenses of the alleged value of being trolled and lied to by White House officials. The reason that Trump knows he can abuse the press like he does, and they will let him get away with it, is because he knows that they're in it for the ratings.

The reality TV clashes between reporters and Sanders make for watchable videos -- which sells ads, full stop. And journalism in a capitalist society depends on those ad dollars. Believe me, I'm not some pure-minded soul here. I have watched Sanders lie to and troll reporters with the same sick fascination that many people do. She makes a great reality TV villain, no doubt about it. That's a profitable line for news organizations, which is why having a seat in the room and getting first crack at printing or running the "what did that monster say now" story is a coveted thing in the world of journalism. I bet Acosta wants his spot back. It's made him one of the most famous reporters in the country.

Far be it for me to hate on someone for getting paid. But at a certain point, we reach question of whether the profits justify the long-term damage being done to the institution of journalism. Letting Trump turn our venerated media institutions into "The Apprentice: Press Room Mud-Wrestling Edition" simply isn't worth the ratings or the clicks. There are ways to report on his mendacity without making a spectacle of it. That starts with boycotting the White House press briefings.