Conservatives have gone fully fact-free: So how the heck do we even talk to them?

The "debate" over the Jim Acosta video shows the right has no use for facts. Is there any way to talk to them? 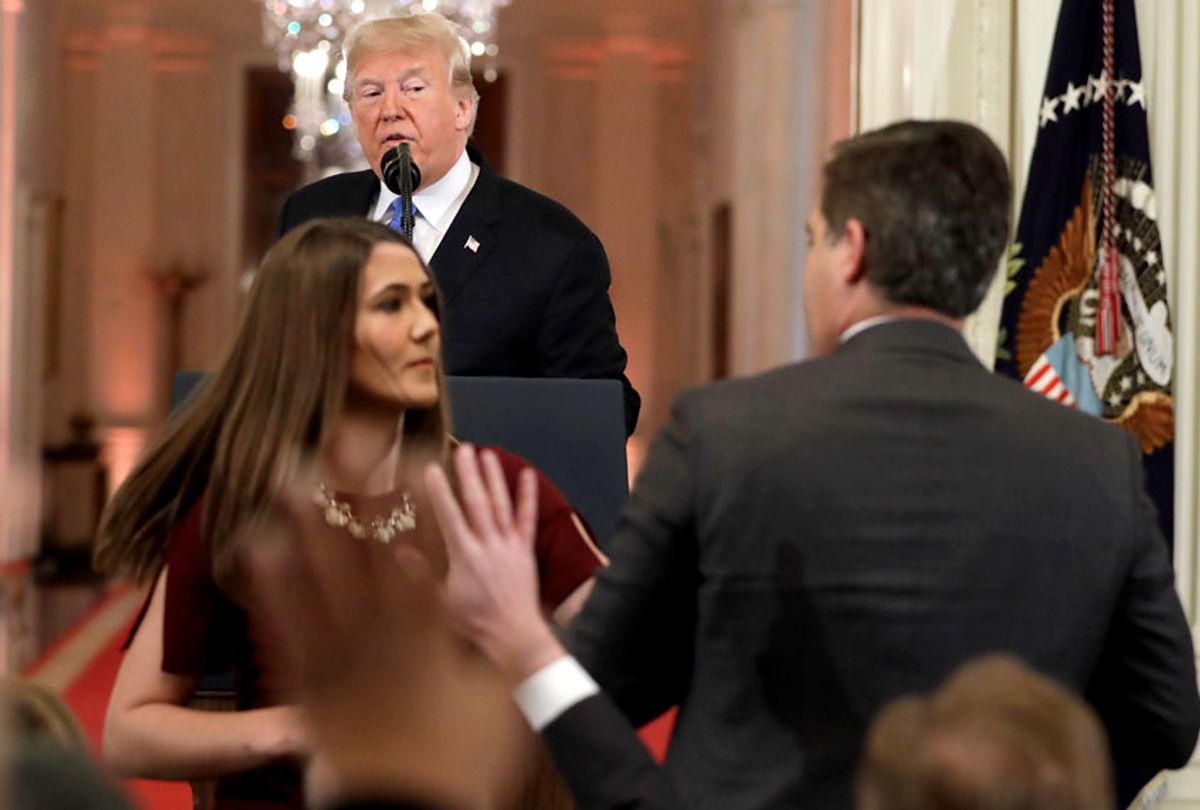 Last week, Donald Trump's administration pulled off another of the routine stunts it uses to hijack the media narrative, whip up the right-wing base, and distract both journalists and pundits from more important news stories. On Wednesday, Trump used a press conference to create a reality TV-style beef with CNN reporter Jim Acosta. First he got testy with Acosta for asking pointed questions, and then he directed a White House intern to try to confiscate Acosta's microphone. Acosta's efforts to hold onto the microphone resulted in incidentally touching the female intern's arm.

White House press secretary Sarah Huckabee Sanders immediately pretended to believe that a brief brush-off was the equivalent of deliberate gendered violence, using a doctored video created by a conspiracy theory website to back up her obvious bad-faith claims. This lie became the pretense for booting Acosta from the White House press pool.

Whether the stunt was planned in advance or not, it worked out beautifully for the White House, which saw hefty amounts of internet and cable news coverage turned over to a pointless debate between people faking umbrage over this brief touch and people pointing out what was obviously true, which was that Acosta didn't do anything wrong. The video, both in its real and doctored form, was endlessly analyzed. Perhaps most important, media attention was diverted from last week's real stories: The Democratic wins in Tuesday's midterm elections and Trump replacement of Attorney General Jeff Sessions with Matt Whitaker, an unqualified lackey whose only job duty appears to be obstructing legal inquiries into Trump's possible crimes.

Watching smart people fruitlessly insist on arguing evidence and facts with conservatives who clearly have no respect for either got under my skin. I took to Twitter to point out that no one actually believes Acosta did something wrong, but that many Trump-supporting conservatives are simply faking that belief in order to troll the left and distract the media. I wrote a whole book, "Troll Nation," about the way that "triggering the libs" has become the single most important goal of the modern American right. And how better to do this than to pretend to believe something obviously false, and then laugh at liberals as they drive themselves nuts desperately trying to get conservatives to see reason?

These tweets went viral, which I suppose shows that many on the left have finally decided that it's time to accept that your average conservative fancies himself to be Hannibal Lecter masterfully trolling Clarice Starling. (Buy my book!) In truth, it doesn't actually require much in the way of grace or wits to gaslight liberals. All it requires is a shameless willingness to say obviously false things, and then watch your opponents -- still romantically attached to the idea of reasoned debate -- grow increasingly desperate in insisting that objective reality should inform one's opinions.

But while many people liked my tweets, others on the left responded with frustration, asking how, exactly, we're supposed to deal with right-wingers if they flat out reject the idea that truth has any value in political discourse.

I find this question frustrating, mainly because it assumes that for every problem, there must be a solution — an assumption that the evidence simply doesn't support. How do you persuade people to listen to reason or acknowledge the facts, when they have openly declared that they don't care about reason or facts?

The answer is simple: You can't. These are autonomous adults who have decided that loyalty to Trump and hatred of liberals matters more than the truth. There are no cool psychological tricks one can use that are likely to convince them to readjust their values system.

That answer, of course, is unsatisfying, because it's not like liberals can simply drop all engagement and discourse with conservatives. Doing that would be tantamount to giving up on this country and letting the liars drag us directly down the path to authoritarianism, and quite possibly outright fascism. So what do we do, rhetorically speaking, to fight back?

The first thing liberals and journalists should do is find ways to speak the truth without inviting conservatives to troll them with "debate" about it — debate that will inevitably just be the pitting of lies against truths, leaving those who still believe in reason frustrated and giving conservatives endless opportunities to gloat about their triggering talents.

There are a variety of tools that accomplish this, but the primary one is to avoid speaking to liars and instead speak about them. For instance, cable news would do well to stop inviting Kellyanne Conway or other administration liars to appear on camera and tell more lies. That time would be better used straightforwardly debunking their numerous falsehoods and deliberate misstatements.

Brevity is key here. Whenever you're explaining, you're losing. For instance, it was a waste of time going frame by frame through that Jim Acosta video to prove he did nothing wrong, since everyone who claimed to believe he had done something terrible was lying in order to troll the left. Journalists would have done better to  present the fact that Acosta did nothing wrong as self-evident truth, which it was, and move on to addressing the real story, which is how Trump uses lies to advance his agenda.

When it comes to more direct encounters with trolling right-wingers — on social media or, say, at the Thanksgiving dinner table — the maxim to live by is that you can't reason someone out of a belief they didn't reason themselves into. Evidence, facts and rational argument are all pretty useless when you're dealing with a person who rejects the value of all those things.

It's a good idea to remember what the troll is trying to get out of this situation. For most conservatives who play this game, they "win" either by baiting a liberal into a pointless and unwinnable debate or by making the liberal flustered and angry. So don't reward them by giving them either.

Instead, try to raise the social costs of lying for the purpose of trolling -- as high as possible. For randos on social media, shame is admittedly unlikely. Blocking them and depriving them of the interaction they crave is the only real method. But on those occasions when you're engaged with a coworker, friend or family member, that's a time that social shaming — which liberals are often reluctant to use, but which can be really effective — is helpful.

Don't debate facts. Focus instead on impacts. Instead of getting into an argument about whether climate change is real, point out that lying in order to leave the world a worse place for one's children is gross behavior. Don't debate whether #MeToo has gone "too far" or whether Christine Blasey Ford is lying. Instead, shame the person saying these things by bluntly stating your support for victims and opposition to sexual abuse. I find that making it personal can often be really helpful. If a conservative in my life praises Trump for trolling the press with his "enemy of the people" language, I might ask that person if they really think that I am a force for evil and that I should be censored, or perhaps imprisoned.

Be calm and dispassionate, however, and state things matter-of-factly. Any sign of emotion will be taken as evidence of "triggering" and is likely encourage to encourage still more trolling behavior. But I've personally had a lot of luck with calm but adamant shaming, perhaps because it makes behavior the focal point, rather than some pointless debate over what the facts are.

None of this really changes anybody's mind, I'm sure, and the conservatives in your life will no doubt grumble about how you're "politically correct" as soon as you leave the room. That's too bad, but it's really out of your control. What liberals can do is try to minimize the amount of lying and trolling by raising the costs of doing those things, and reducing the rewards. If it makes you feel bad to shame someone, that's understandable. Remember that they are trying to make you feel bad by telling deliberate lies and baiting you with trolly arguments.

Things are going to get a lot worse on this front, I'm afraid, before they get better. Trump and outlets like Fox News are escalating the lies and trolling stunts, and the conservatives who follow them are marching right in line. Trying to win arguments against those forces with facts and reason has failed time and again. It's time for new strategies, instead of irrationally hoping that someday truth will come shining through and carry the day.