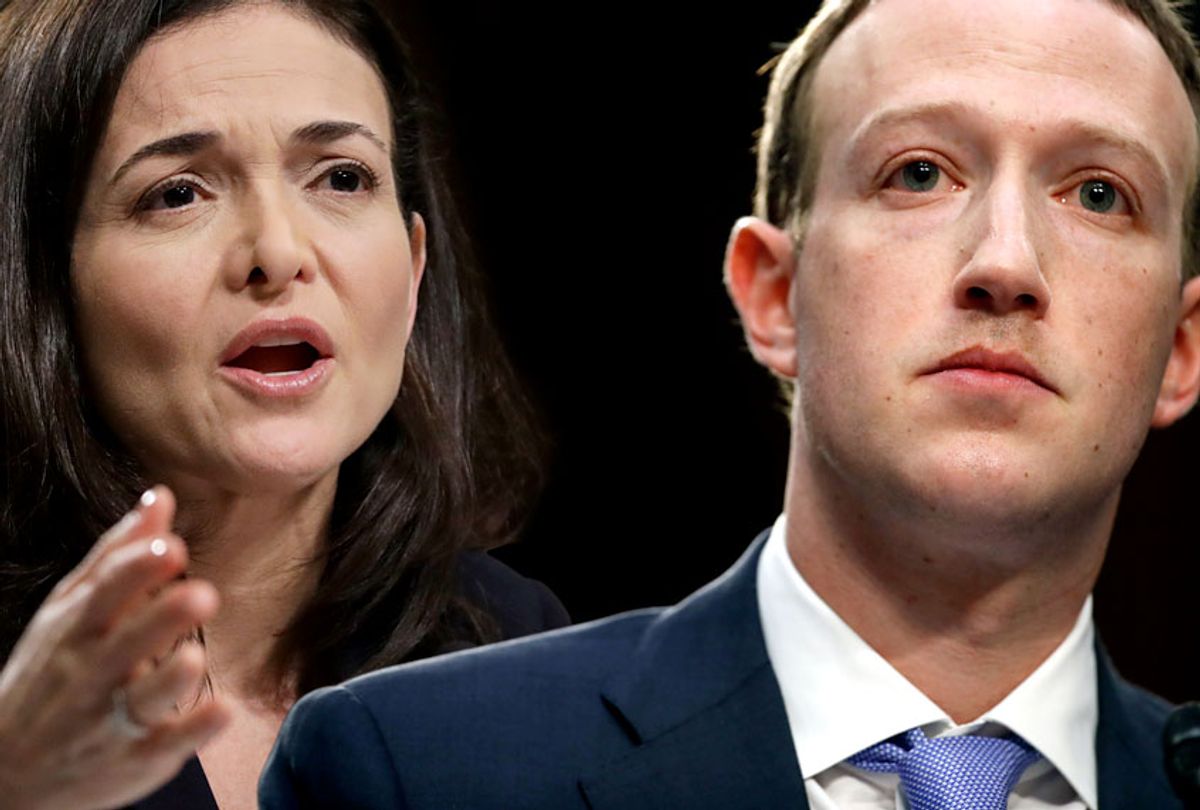 For nearly a decade, Facebook has claimed their mission is “to make the world more open and connected.” Yet a bombshell report, published by the New York Times today, suggests the company's internal machinations were shadowy — and reveals how far executives at the tech behemoth were willing to go to deflect criticism.

Most damningly, Facebook is alleged to have hired a Republican opposition-research firm to smear protestors as anti-Semitic, while simultaneously scapegoating anti-Facebook groups as under the control of  liberal, Jewish billionaire George Soros, a common right-wing refrain that reeks of anti-Semitism.

The New York Times claims to have interviewed more than 50 people, including current and former employees and lawmakers. Most spoke under the condition of anonymity due to signed confidentiality agreements or fear of retaliation. Facebook’s CEO Mark Zuckerberg and COO Sheryl Sandberg did not comment for the story, but Facebook provided The Times with a boilerplate statement.

“This has been a tough time at Facebook and our entire management team has been focused on tackling the issues we face,” the statement said. “While these are hard problems we are working hard to ensure that people find our products useful and that we protect our community from bad actors.”

The report begins in 2015 when Zuckerberg, Sandberg and other Facebook executives reportedly contemplated removing a Facebook post from then-candidate Donald Trump, which constituted an attack on Muslims. After much discussion, the post remained on the site. Despite hemming and hawing over Trump's offensive posts, Facebook later hired a former aide to Trump ally Jeff Sessions after the election.

The report brings to light internal politics — and mishaps — as the company became more aware it was being used for Russian propaganda. Internally, the company veered into the realm of absolute chaos when the news of the Cambridge Analytica data breach broke in March 2018. Then, The Times, The Observer of London and The Guardian prepared to publish a joint investigation into how user data had been appropriated by the firm to profile voters in America.

Internally, Facebook went into damage control mode, relying on help from a D.C. consultancy called Definers Public Affairs, which was "founded by veterans of Republican presidential politics," as the Times states. A right-leaning outfit, Definers helped obfuscate Facebook's issues in the eyes of the general public by writing critical briefs of competing tech firms, in order to make it seem like all Silicon Valley suffered similar privacy issues as Facebook. Definers' work had a peculiar habit of ending up in the hands of right-wing news sites, including Breitbart News. As the Times elaborates:

On a conservative news site called the NTK Network, dozens of articles blasted Google and Apple for unsavory business practices. One story called Mr. Cook hypocritical for chiding Facebook over privacy, noting that Apple also collects reams of data from users. Another played down the impact of the Russians’ use of Facebook.

The rash of news coverage was no accident: NTK is an affiliate of Definers, sharing offices and staff with the public relations firm in Arlington, Va. Many NTK Network stories are written by staff members at Definers or America Rising, the company’s political opposition-research arm, to attack their clients’ enemies.

Another attempt to deflect criticism happened when the company fought back against a coalition called Freedom from Facebook, an organization that crashed a hearing of the House Judiciary Committee. Organizers held signs portraying Sandberg and Zuckerberg, who are both Jewish, as two heads of an octopus stretching around the globe — an image that hearkens back to labor posters of the early twentieth century, although similar imagery was used by Nazis to mock Jews. (The symbolic connection between octopi and anti-Semitism is not cut-and-dried; notably, an incident in the 2000s in which multiple tech firms colluded to keep wages low among programmers has been dubbed "the Techtopus" by journalists, and is not widely considered to be anti-Semitic.)

Eddie Vale, a Democratic public relations strategist who led the protest, later said the image was meant to evoke old cartoons of Standard Oil, the Gilded Age monopoly. But a Facebook official quickly called the Anti-Defamation League, a leading Jewish civil rights organization, to flag the sign. Facebook and other tech companies had partnered with the civil rights group since late 2017 on an initiative to combat anti-Semitism and hate speech online.

“Depicting Jews as an octopus encircling the globe is a classic anti-Semitic trope,” the organization wrote. “Protest Facebook — or anyone — all you want, but pick a different image.” The criticism was soon echoed in conservative outlets including The Washington Free Beacon, which has sought to tie Freedom from Facebook to what the publication calls “extreme anti-Israel groups.”

Ironically, Facebook was content to call protesters anti-Semitic vis-a-vis the A.D.L., while simultaneously using Definers to connect its opponents to George Soros, an attack generally recognized as an anti-Semitic dogwhistle. The report explains:

Facebook also used Definers to take on bigger opponents, such as Mr. Soros, a longtime boogeyman to mainstream conservatives and the target of intense anti-Semitic smears on the far right. A research document circulated by Definers to reporters this summer, just a month after the House hearing, cast Mr. Soros as the unacknowledged force behind what appeared to be a broad anti-Facebook movement.

He was a natural target. In a speech at the World Economic Forum in January, he had attacked Facebook and Google, describing them as a monopolist “menace” with “neither the will nor the inclination to protect society against the consequences of their actions.”

Definers pressed reporters to explore the financial connections between Mr. Soros’s family or philanthropies and groups that were members of Freedom from Facebook, such as Color of Change, an online racial justice organization, as well as a progressive group founded by Mr. Soros’s son. The research documents also highlighted those groups’ unrelated criticisms of Mr. Trump. (Definers also circulated research about other critics of Facebook, such as Diamond and Silk, the pro-Trump social media stars who had claimed they were treated unfairly by Facebook.)