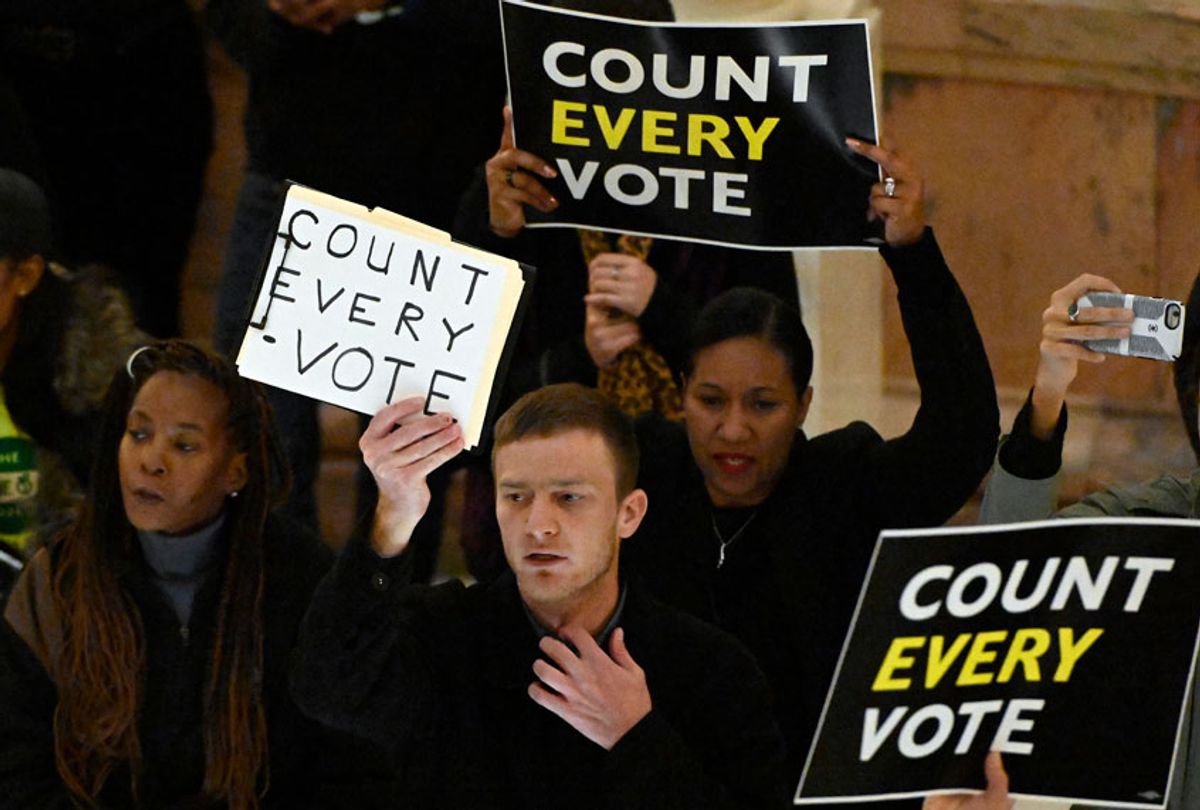 People hold signs as they protest the election in the rotunda of the state capitol building Tuesday, Nov. 13, 2018, in Atlanta (AP/John Bazemore)
--

A federal judge has ruled that Georgia's Gwinnett County violated the Civil Rights Act by rejecting votes based solely on missing or incorrect birth years listed on absentee ballots.

U.S. District Judge Leigh Martin May granted a temporary restraining order to stop the county from rejecting ballots based on birth year issues, writing that “rejecting absentee ballots on this basis violates the Civil Rights Act.”

May wrote that the Civil Rights act forbids Jim Crow-era rules that were intended to disenfranchise African-American voters through excessive bureaucratic hurdles.

The Civil Rights Act prohibits rejecting voters “because of an error or omission on any record or paper relating to any application, registration, or other act requisite to voting, if such error or omission is not material in determining whether such individual is qualified under State law to vote in such election,” the judge wrote in his ruling, adding that this was “intended to address the practice of requiring unnecessary information for voter registration with the intent that such requirements would increase the number of errors or omissions on the application forms, thus providing an excuse to disqualify potential voters.”

Judge May added that Gwinnett County officials went through with the ballot rejections despite admitting that it was not required under Georgia law.

“An elector’s year of birth is not material to determining the eligibility of an absentee voter,” May wrote. “A voter’s ability to correctly recite his or her year of birth on the absentee ballot envelope is not material to determining said voter’s qualifications under Georgia law. Indeed, Defendants acknowledged in a prior briefing that Georgia law only requires that a 'county election official can confirm the identity of the voter with the information that is provided.'”

Judge May issued a temporary restraining order to stop the county from “rejecting absentee ballots containing an error or omission relating to the absentee voter’s year of birth,” meaning that the county will have to count the “narrow set of ballots” that fell under the jurisdiction of the ruling.

The suit was initially filed in October, weeks before the election. The suit also argued that ballots should also not be rejected if they have a “missing signature, incorrect address, [and] other clerical errors.”

Judge May said he did not find that those criteria violated the law.

The ruling comes after voting groups scored another victory in a Federal District Court in Atlanta, where Judge Amy Totenberg ordered a delay in the certification of the state's election results because of the state's handling of its voting system.

"Repeated inaccuracies were identified in the voter registration system that caused qualified voters likely to lose their vote or to be channeled at best into the provisional voting process because their registration records did not appear or had been purged from the data system." Totenberg wrote, adding that there was "evidence that certain counties and precincts stintingly provided provisional ballots to voters despite the volume of individuals facing registration issues at the polls."

It's unclear whether the number of outstanding ballots will be enough to swing the Georgia governor's race, where Republican Brian Kemp leads Democrat Stacey Abrams by more than 50,000 votes. Kemp is at 50.3 percent of the vote, leading Abrams by 0.5 percent. If Abrams gains 19,000 votes, the margin would be within the threshold to trigger an automatic recount. If Abrams gains 21,000 votes, Kemp would fall below 50 percent of the vote, triggering an automatic runoff election.

While most eyes are on the governor's race, Judge May's decision could also swing the race in Georgia's 7th congressional district, where incumbent Republican Rob Woodall leads Democrat Carolyn Bourdeaux by roughly 500 votes out of more than 270,000 cast. There are about 300 absentee ballots that will be counted following May's decision, the Atlanta Journal-Constitution reported. That race in a suburban Atlanta district will likely go to a recount, given the narrow margin.