POUTUS: Not tough on allies, Trump is just petulant and unlikeable 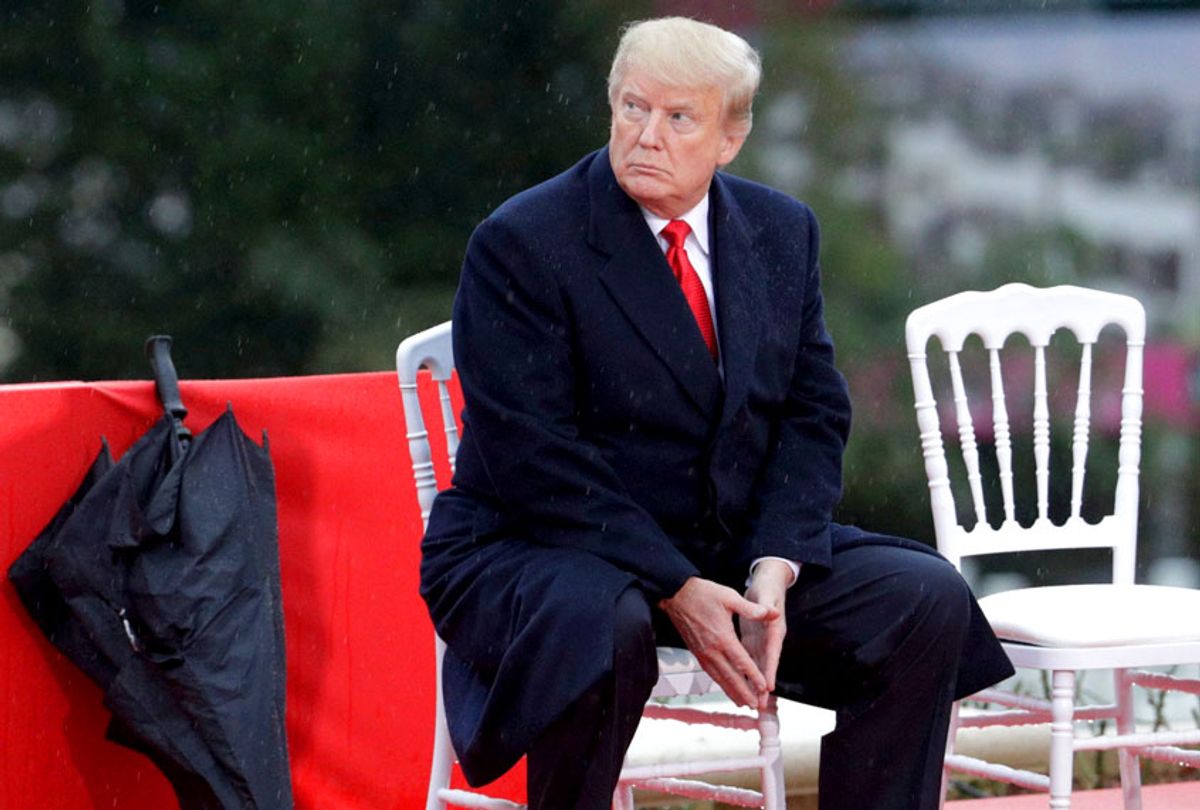 Donald Trump has had a very bad week, and the badness is going to keep on coming. When he went to bed on election night, Democrats had flipped about twenty seats in the House, and were forecast to lose as many as four or five in the Senate. At his press conference the next day, he crowed that Republicans would hold 55 seats in the Senate in the next congress and falsely said “Republicans dramatically outperformed historical precedents.”

Trump’s mood at his press conference after the election went rapidly downhill from there. He escalated his feud with cable news network CNN and its White House correspondent Jim Acosta, famously telling Acosta to “put down the mic” and to “sit down” before he walked to the side of the lectern and, pointing his finger at Acosta, told him, "I tell you what, CNN should be ashamed of itself, having you working for them. You are a rude, terrible person. You shouldn't be working for CNN." He yelled at African American reporter April Ryan to “sit down,” refusing to take her questions, and later in the week called her “a loser” and “very nasty.” Then he went after the PBS Newshour reporter Yamiche Alcindor, calling her question about white nationalists gaining acceptance from Trump’s remarks “racist.”

By Friday, his mood was even darker. Stopping on the White House lawn on his way to depart for his trip to Paris, Trump laid into CNN reporter Abby Phillip, who had asked him whether his new Attorney General, Matthew Whitaker, would “rein in” the Russia probe of Special Counsel Robert Mueller. "What a stupid question that is," Trump said. "What a stupid question. But I watch you a lot. You ask a lot of stupid questions."

Trump’s Paris trip afforded him the opportunity to change the conversation. He was headed to Europe for the celebration of the armistice that ended World War I a hundred years ago. The entry of U.S. forces into that war in April of 1917 marked the turn in that brutal stalemate. Over the next year and a half, two million American men in uniform would be committed to the war. By the spring of 1918, American forces were arriving on the battlefield at a rate of 10,000 a day. American forces won victories at great expense in the battles of Cantigny, Chateau-Thierry and Belleau Wood, and helped British, French and Portuguese forces win the battle against the German offensive in the Spring of 1918.

Without the entry of the United States into the war, Europe would have probably fallen to German aggression, and millions more would have been killed than the approximately 20 million who ended up falling in the war, as many as eight million of them civilians. It goes without saying that Europe owed us a debt of gratitude on the 100th anniversary of the end of the war.

As Trump flew to Paris, all three of Europe’s major leaders had been wounded politically in recent months. Britain’s Theresa May’s popularity is at an all-time low, according to a July poll quoted in the Evening Standard. “Only one quarter of Britons now have a favourable view of Mrs May, while a huge 62 per cent have an unfavourable view,” the paper reported. Problems with Brexit have riven her government with resignations. Four months ago, her strongly pro-Brexit Foreign Secretary Boris Johnson resigned. Last week, his brother Jo Johnson, the transportation secretary, followed him out the door.

French President Emmanuel Macron’s poll numbers are as bad as May’s. A poll taken in September held only 29 percent of French citizens approving of his performance in office, according to CNBC. Macron’s popular environmental minister, Nicolas Hulot, recently resigned, and one of his closest allies, Interior Minister Gérard Collomb, announced that he will depart the government and run for mayor of Lyon in 2020.

The government of German Chancellor Angela Merkel is similarly troubled. Two weeks ago, she shocked the country with her announcement that she will not run in December for the leadership of her party, the Christian Democratic Union, and will step down as Chancellor in 2021, ending her 13-year rule as Germany’s leader. This week, her minister of the interior, Horst Seehofer, announced that he will resign his position as leader of the Christian Social Union, a party that is an important member of Merkel’s governing coalition.

With his poll numbers ten points higher than his European counterparts’, Donald Trump could have flown into Paris feeling relatively good. Instead, he spent the weekend pouting. The big photo on Sunday of European leaders marching down the Champs-Élysées in Paris was Trump-less. He was driven to the Arc de Triomphe later, where he was treated to a speech by Macron denouncing Trump’s prideful reference to himself recently as a “nationalist.”

“Patriotism is the exactly opposite of nationalism,” Macron told his fellow European leaders. “Nationalism is a betrayal of patriotism by saying, ‘Our interest first. Who cares about the others?’”

In fact, Trump appeared to smile only once the entire weekend, when Russian President Vladimir Putin arrived (also separately from the others), and shook his hand. Photographs taken over the weekend often showed Angela Merkel and Macron huddling together smiling and talking. Other groups of leaders were also visible standing apart from Trump, who often stood alone, ignored by the others.

Trump came under withering criticism on Saturday for skipping the memorial service at the Aisne-Marne American Cemetery at the foot of the hill where the Battle of Belleau Wood was fought. The White House issued lame excuses about Trump’s helicopter not being able to fly because of the weather. But those were quickly shot down by military experts who pointed out that military helicopters of the type used by Trump don’t depend on sunny weather to fly in combat. Military helicopters are equipped to fly in almost any conditions save for a white-out blizzard or fog, neither of which was present on a drizzly 50 degree day in France.  This week, Trump tweeted that he was prevented from driving to the cemetery by the Secret Service, because they didn’t want to drive in the rain.

The only thing Trump did over his weekend abroad was to renew his attacks on NATO and European trade imbalances. Trump called European contributions to NATO “unfair,” and tweeted that the United States pays “for LARGE portions” of European defense.

Just returned from France where much was accomplished in my meetings with World Leaders. Never easy bringing up the fact that the U.S. must be treated fairly, which it hasn’t, on both Military and Trade. We pay for LARGE portions of other countries military protection,........

Great Britain, France, and Germany have listened to his bellowing before, of course, mostly in the exact words Trump used last weekend. That’s one of the extraordinary things about Trump. He never says anything new. U.S. good. NATO bad. Trade unfair. America first. Everybody else second.

You would think Trump would return from the solemn tributes to American and allied war dead in France with a sense of pride in the role the United States has played in keeping Europe free and democratic. The Trump family traces its heritage to Kallstadt, a small town between Mannheim and Kaiserslautern in the German state of Rhineland-Palatinate. The United States freed his family’s ancestral home from Nazism.

I lived on a U.S. Army base not far from Kallstadt in 1955 and 1956. The nearby cities of Stuttgart, Mannheim and Kaiserslautern were all heavily bombed during World War II. In fact, some of the devastation of German cities and towns was still visible ten years after the end of the war. I remember driving down bombed out city streets on school buses. We could see the devastation from our car when we went to visit friends of my family’s at other Army posts nearby. We played in German pillbox fortifications and in fields where you could still find German helmets and backpacks. One day, we found a German rifle. Another day, my brother and I proudly brought home a German “potato masher” hand grenade.

World War II is still a presence in the lives of Germans. As recently as last year, hundreds of residents of Kaiserslautern had to be evacuated when bombs from allied air raids were uncovered during digging at a construction site. Bombs weighing 250 and 500 pounds were uncovered. They were the third and fourth bombs found in the area in as many weeks. The effects of the wars in Europe are still felt over there. Bombs dropped 75 years ago are still in the ground, ready to explode.

The man who traces his roots to a part of Europe riven by wars that killed tens of millions within the last century didn’t represent his country at the celebrations honoring the Armistice. He just stood there and pouted. His motto isn’t really America first, it’s Trump first, and the problem last weekend in Paris was that Trump wasn’t first. Those who gave their lives in World War I were first.

Trump didn’t show up to honor the soldiers who gave their lives to make us free. He just sulked, and scowled, and pouted.