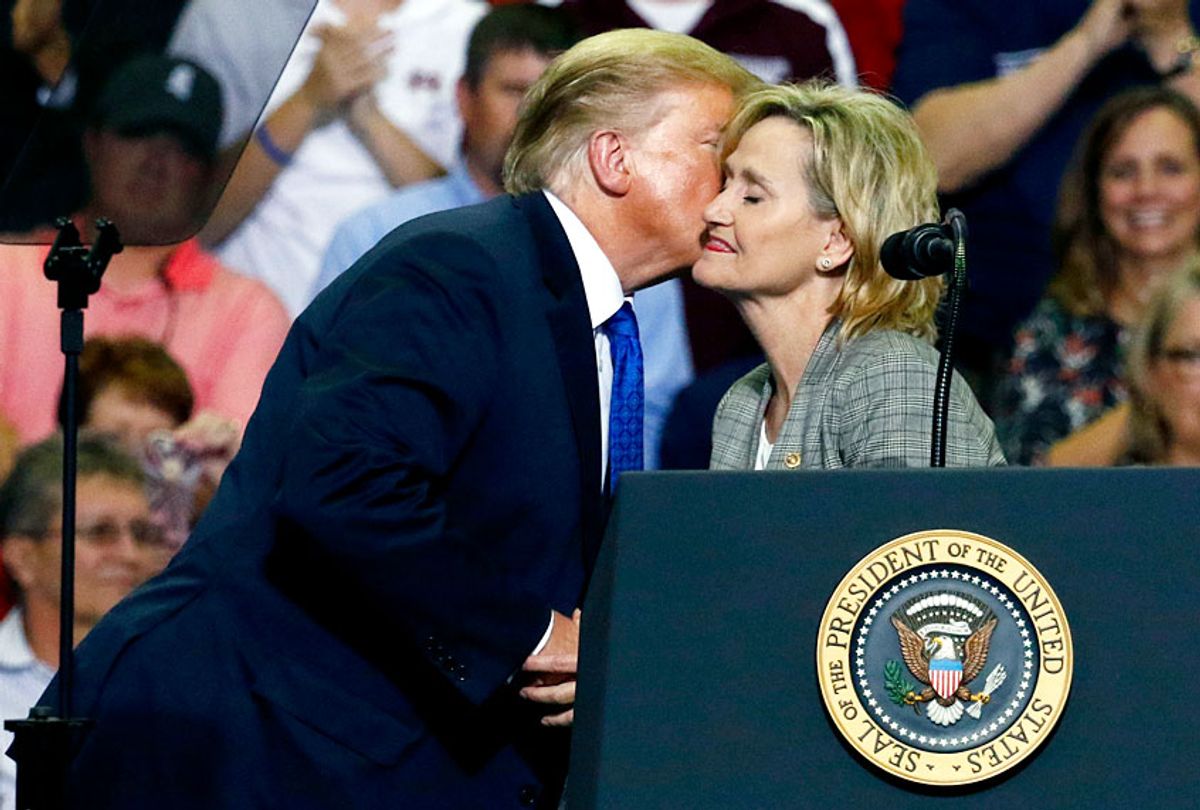 Just as Republican Sen. Christie Hyde-Smith faces mounting backlash for joking about a "public hanging" in a state marred by its history of lynchings, President Donald Trump is now reportedly planning to swoop into Mississippi to save the troubled GOP candidate before her runoff election against Democrat Mike Espy in twelve days.

Hyde-Smith faces a runoff in the race to fill longtime Republican Sen. Thad Cochran's seat. After beating one Republican last week, she will now face Democrat Mike Espy on Nov. 27 after neither candidate received 50 percent of the vote on Election Day.

Did you know extremists like Cory Booker are campaigning for Mike Espy here in MS? Considering who's lining up behind Espy—Clinton, Soros, Schumer, Pelosi, Warren, Feinstein, Harris—it's not a surprise. With so much on the line, we cannot afford losing this seat to the DNC. pic.twitter.com/F5ZmmhIAWu

Plans for a Trump rally in Mississippi weren't yet finalized but it's expected to take place on the eve of the runoff, Politico reports. The news outlet notes that it would be Trump's first rally since his nationwide pre-midterm tour. Trump won Mississippi by nearly 18 percentage points in the 2016 presidential election.

News of Trump's alleged trip comes just one week after the Republican Senate candidate was caught on tape "joking" that she would be "on the front row" at a "public hanging."

Many critics and political observers interpreted the comment as having a link to Mississippi's long history with racism that includes 581 lynchings between 1882 and 1968 — the most of any U.S. state in that period, according to the NAACP.

The American Civil Liberties Union slammed the Republican candidate in a blistering statement.

"Sen. Hyde-Smith should be ashamed of herself," ACLU of Mississippi executive director Jennifer Riley Collins and ACLU deputy legal director Jeff Robinson said in a joint statement Tuesday. "The fact that she chooses to use such repugnant language despite the ugly history in her state speaks to her lack of concern and knowledge about the experience of people who don't look like her."

During a campaign stop in Tupelo, Mississippi, on Nov. 2, Hyde-Smith laughed and said, "If he invited me to a public hanging, I'd be on the front row." Her comment, which drew laughter from the crowd, went viral on social media.

"In a comment on Nov. 2, I referred to accepting an invitation to a speaking engagement," she said. "In referencing the one who invited me, I used an exaggerated expression of regard, and any attempt to turn this into a negative connotation is ridiculous."

She appeared at a news conference on Monday alongside Republican Gov. Phil Bryant to announce an endorsement from anti-abortion rights group the National Right to Life Committee, but when pressed about her comment at the event she repeatedly dodged them, returning to her earlier statement.

"This is 2018," Espy said during a Monday morning appearance on CNN. "We need leaders who will try to unite us and not divide us," and Hyde-Smith's comments, he argued, "reinforce the stereotypes that have held back our state."

The Senate seat vacated by Cochran will be decided on Nov. 27. Democrats' chances to capture the seat are slim.

"To celebrate the chance to sit in the front row of a public hanging demonstrates a profound ignorance of the state's institutional legacy of racism," the ACLU said in its statement. "Sen. Hyde-Smith needs to be held accountable for her words."

Hyde-Smith was the state's agriculture commissioner and a Mississippi state senator. She served as a Democrat until 2010, when she switched to the Republican Party. She has since touted her conservative stances on issues like abortion, immigration and gun rights. After taking her current Senate seat, Hyde-Smith became the first woman to represent Mississippi in Congress.

Espy, meanwhile, would become Mississippi's first black senator since Reconstruction. Throughout the campaign trail, Espy touted his federal-level experience, which comes with some baggage. The 64-year-old Democrat previously served in the House of Representatives for six years before going on to serve as President Bill Clinton's secretary of agriculture from 1993 to 1994. Espy was forced to step down amid an ethics probe of allegations that he improperly accepted airplane and sports tickets. He was eventually acquitted on all charges. The Mississippi Democrat has been out of public office for nearly 25 years, spending the past decade as a private attorney.