We treat the Constitution like a religious text, with women's bodies on the line 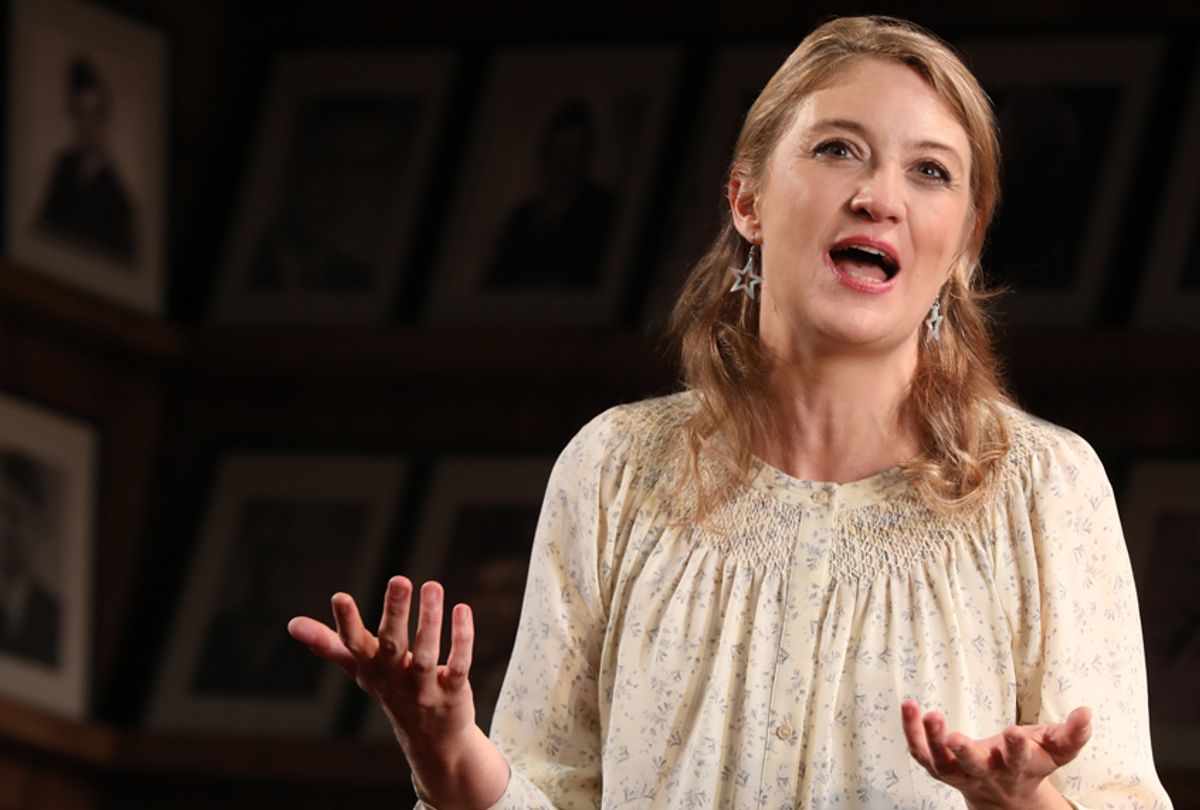 Heidi Schreck in "What the Constitution Means to Me" (Joan Marcus)
--

Actress and playwright Heidi Schreck couldn't have had better timing. Her play that recently finished its run at the New York Theatre Workshop, "What The Constitution Means To Me," isn't about Donald Trump and the daily threat he represents to the world's oldest representative democracy, to be clear. But the current context gives the play a sense of urgency and emotional resonance that has been drawing audiences in, leading to an extended run at the Greenwich House Theater starting in late November.

Schreck parlays her high school years earning scholarship money by doing speeches about the Constitution at American Legion lodges into this 90 minute exploration of how law and politics interact with the real lives of real people — particularly women. She uses the same prompt she was given in high school — "what the Constitution means to me" — as the basis for a hilarious and often deeply moving exploration of how this 231-year-old document shapes, limits, protects or even ruins the lives of people who often have very little access to the high-minded rhetoric of law schools and court rooms.

Schreck spoke with Salon about her play and about the Constitution. This interview has been edited for clarity and length.

This play really couldn’t be better timed, in terms of the zeitgeist. Did you have any idea when you started writing it that you’d be performing it during an era of Constitutional crisis?

I had no clue when I started writing it that I would be performing it at this moment. I actually first performed a version of the play, an early version, in 2015. I performed it while Obama was president, and it was still centered on the 14th amendment, clause one.  It was still centered around women's bodies in the Constitution, so I was talking about abortion, and domestic violence, and bodily autonomy, and the citizenship clause, all of these things I was talking about in 2015. I did not realize that the conversation about these things would have become so loud by the time I actually had a full production.

What was it that inspired you to write this?

I've known for years that I wanted to write a piece about my experience traveling the country, giving speeches about the Constitution as a teenager. That always seems like a promising premise for a show to me. It was one of the greatest experiences of my high school years. I loved it. I love speech-making. I was a total geek: Debater, lover of all things political and historical.

I was really a young acolyte of the Constitution. I knew that I wanted to write a piece about my love of this document as a teenager, and about the gradual disillusionment I encountered as I grew older and learned more of the truth about our country and our political system.

As a teenager, the most important thing you were supposed to do in this contest was connect to your personal life to the document. Of course, at 15, that's an impossible task. I didn't understand enough about myself, or about the document, to do that.

In my 30s, I could say, well, now that I know much more about myself and this country, what would it mean to take that prompt seriously and really investigate how this document has affected my life and the lives of the women in my family and my own body?

As you said, you really focus on the 14th amendment. Why did you single out that amendment?

I knew that lawyers had attempted to address this problem, of violence against women, using the 14th amendment, using the equal protection clause, and then later, in the Jessica Gonzales case, using the due process clause. I knew that they had been unsuccessful at finding Constitutional protections for women.

You've been staging this play for a couple months, and in that time, the 14th amendment has somehow become a huge source of debate in this country, because Donald Trump has threatened the right to be a citizen upon birth, which is inscribed in the 14th amendment. The left has a complicated relationship with the 14th amendment, but how do you view this conservative hostility to parts like that?

In some ways, the veneration of the document is something that both the right and left share. It's been interpreted differently, and they believed different things about it. It feels like a holy text in that way, like a religious text. The majority of Americans, whether or not they will ever read it or not, view it as a piece of sacred text, that is genius.

Do you feel, on the left at least, people have become more open to the idea that the Constitution is just too old, that it needs to be amended, or even scrapped?

I do think more and more people are starting to see the structural problems with it.

I don't want to abolish the Constitution. I think that would be terrifying. There's no way to do it in a way that I don't think would bring chaos and destruction. I do wish we could amend it.

Certainly, the framers did not predict how massive the population differences will become among the states. Now, people in rural states get so much more representation in the Senate than people in urban areas and suburban areas.

Shifting gears a little to how this play is staged: Outside of the movie "Election," you don't see too many movies or plays that address high school debate nerd culture. Are people appreciating that you're reflecting back this part of high school to audiences?

There's a point in the play when I always think of Reese Witherspoon, when I like really get my facts out there, and then I give a self-satisfied smile.

There's a woman I just met who's around my age and her kids saw the show. She came back with her entire debate team, all women in their 40s. They brought a picture of their female debate coach, who's no longer alive. I've discovered so many more women did debate than I realized. A lot of debaters have come out of the closet, which I find very exciting.

Hillary Clinton came to the play and she told me she had done an American Legion contest when she was in high school. So, that's been exciting.

I love debate. I think debate should be required in high school.

I have friends who disagree with me. I have artist friends who say that it promotes this culture of competitiveness, a kind of meanspiritedness. I have friends who find it problematic that when you debate, you are asked to argue a side you might not believe in.

I personally think it's helpful to try to understand the position you don't believe in. One of the most valuable things I learned from debate was to question every assumption I had. You just can't get away with lazy thinking. You're constantly being asked to prove, back up with facts, back up your ideas with facts, provide evidence.

I found that debate taught me how to think. I became an artist, but always questioning what you think is true, always trying to look deeper, always checking yourself to make sure you're not missing something — it's helpful for an artist and a writer, too.

In the last part of the play, you bring a teenage girl on stage and conduct a debate with her. I don't want to spoil too much, but I want to ask, where did you find this girl?

Oh my God, we did an open call for debaters. We called all the high schools and debate clubs in town and then we had three days of auditioning young women debaters. Best three days of my life.

Truly, I was astounded. The level of challenge and intellect in these girls astonished me, and I got to spend three days with all these incredible young women. We didn't put a call for actors. We asked for actual debaters.

What I find really striking about this play is how you contrast the sort of lofty legalistic and rhetorical language in the Constitution with the messy realities of women's lives. How did you really think about constructing that contrast?

That felt like the task: how to connect and investigate the messiness of women's lives and the realities of our body, the human bodies which are messy and confusing and complicated, with these kinds of laws that purport to be clear and objective.

How does it play out in real people's lives, and specifically real women's lives? How does something like law, especially law that was created by men for men by white men for white men, how does that deal with something as specific as women's bodies?

I became fascinated with the idea of bodies that had been left out of the document, and how difficult it is to make a document to protect those bodies, if we weren't even considered from the beginning.

There's so much human drama. If you listen to the Supreme Court recordings on — I don't know if you've listened to Oyez [legal site tracking historical court cases] very much.

Oh my God, you should listen, because it's really incredible theater. You can just hear all of the emotion in their voices, or the lack of emotion. It's like listening to a play.

That's where I found the recording of the Griswold vs Connecticut [the case that legalized contraception]. Justice Warren and the other male justices just kept clearing their throats over and over and over again. It's so clear in their voices how uncomfortable these men are talking about female bodies.

On the very fundamental level, one of the biggest problems with the lack of representation in our government is  that the majority of people making the laws don't have any direct physical bodily experiences with those things they're making laws about. Thank God that seems like it's changing.

I think it's true about everything else as well. I don't understand how a government mostly run by white men can possibly make good decisions for the entire country. It's absurd to me that we're being governed by people who are making decisions regarding things they have never had to deal with themselves.

I really related to this play, because I was a debate nerd in high school. When we were kids, politics were complicated, but nowadays, politics are just absurd. What kind of advice would you give to a 15-year-old who wanted to do speech and debate, now that it's the era of Donald Trump?

It's funny because I've actually been working with so many 15-year olds debaters, and I haven't had to give them much advice. I honestly have found with the kids I've encountered have a greater faith in their ability to affect change in this country, to participate in the democratic process, to rise to positions of political power. They have a stronger faith in that then I remember having at their age.

So, I feel like even in the midst of this absurdity, this frankly terrifying and disgusting moment that we're in, there is also a lot of amazing organizing happening, and deep thinking about our country, and rigorous conversation happening about the future of our country.

In my experience, these 15-year-olds have been part of that, at least in New York City. So, I don't know that I have advice to give them right now. I'm kind of following them.