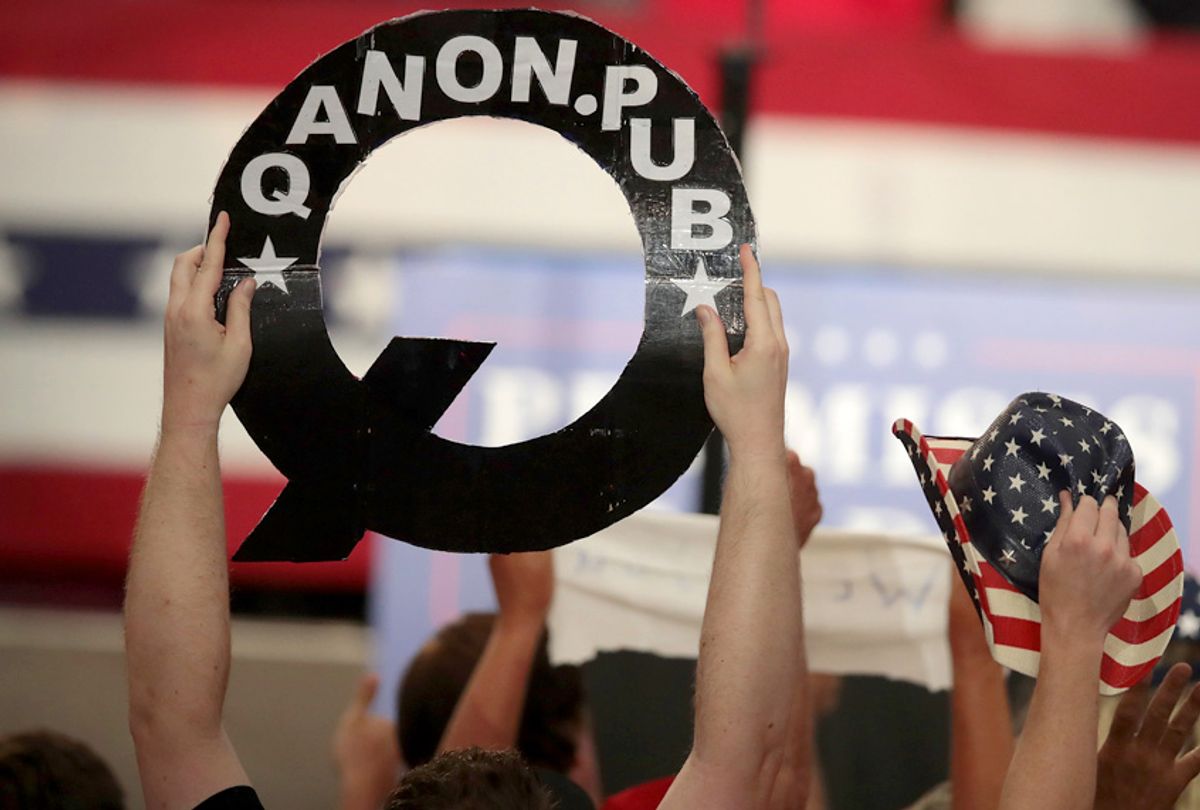 Supporters cheer for Donald Trump as he speaks at a rally. (Getty/Scott Olson)
--

The "QAnon" community is falling apart.

Perhaps no conspiracy theory has thrived more readily in the dark corners of the internet since it was first born last October on the infamous troll message board 4chan, following President Donald Trump's vague remarks last year at a military dinner that it was the "calm before the storm." An anonymous user claiming to be a high-level government informant and calling himself "Q," after the highest level of security clearance at the Energy Department, began leaving cryptic messages he called "crumbs." These were supposed to be hints about a wide-scale government operation known as "The Storm" to take down government corruption and the New World Order, with Trump at the center. While the messages often had specific dates, many aspects of them were purposefully vague, allowing believers in "QAnon" to use their imagination and fill in gaps.

In time, a gigantic overarching narrative emerged in which Trump, Attorney General Jeff Sessions and special counsel Robert Mueller were all working together, planning mass arrests of everyone from Hillary Clinton to liberal financier George Soros to members of Congress for their alleged roles in a massive, world-spanning criminal child sex ring enterprise that has included every former U.S. president — and that people should prepare for martial law and orchestrated mass riots aimed at protecting those marked for arrest. Q's believers have claimed that North Korean dictator Kim Jong-un is a CIA plant, that former Democratic staffer Seth Rich was assassinated by MS-13 on the orders of party leadership, and that Republicans intentionally lost the special election for Sessions' former Senate seat in Alabama to build evidence of voter fraud. At its height, QAnon broke into popular culture, with disgraced TV star Roseanne Barr promoting it on Twitter.

But now, the ongoing failure of Q's predictions to come true has started to fragment the community, and two major events in particular smashed the credibility of the movement for many believers.

The first event was the result of the midterm elections, where Democrats decisively won control of the House. Q had previously assured supporters that, contrary to the polls, there was a "red wave" coming.

The second event was Trump's decision to fire Sessions, who in the QAnon narrative Trump was only pretending to hate, and was the mastermind behind all the impending mass arrests that were supposed to be right around the corner. This was a particular blow, as many supporters were already trying to rationalize losing the House with the fact that, any minute now, Trump was going to declassify huge swathes of intelligence that would result in House Democrats going to jail and a series of special elections that would give it back to Republicans.

And I leave this with you my people...
DECLAS DECLAS DECLAS
FISA brings down the HOUSE#Qanon pic.twitter.com/eHOBVWQ9qf

The end result, according to conspiracy theory debunker Mike Rothschild, is that tons of QAnon believers now realize they have been grifted, while the rest, who have gathered on the social network Voat since the community was banned from Reddit in September, are at each other's throats and frantically spinning ever crazier ideas to explain away why nothing Q has said has come true:

The notion that some of the remaining QAnon believers might form "citizen militias" is particularly troubling, as far-right conspiracy theories have led to violence -- most famously, a man nearly shot up the Comet Ping Pong pizzeria in Washington last year, acting on the hoax narrative that Hillary Clinton and her inner circle were running a sex trafficking ring out of its basement.

Whatever happens, the QAnon conspiracy theory was never fated to end well for its believers. And the whole saga is a cautionary tale about being careful what one believes on the Internet.