Stan Lee, me, and the liberal Jewish identity that binds us 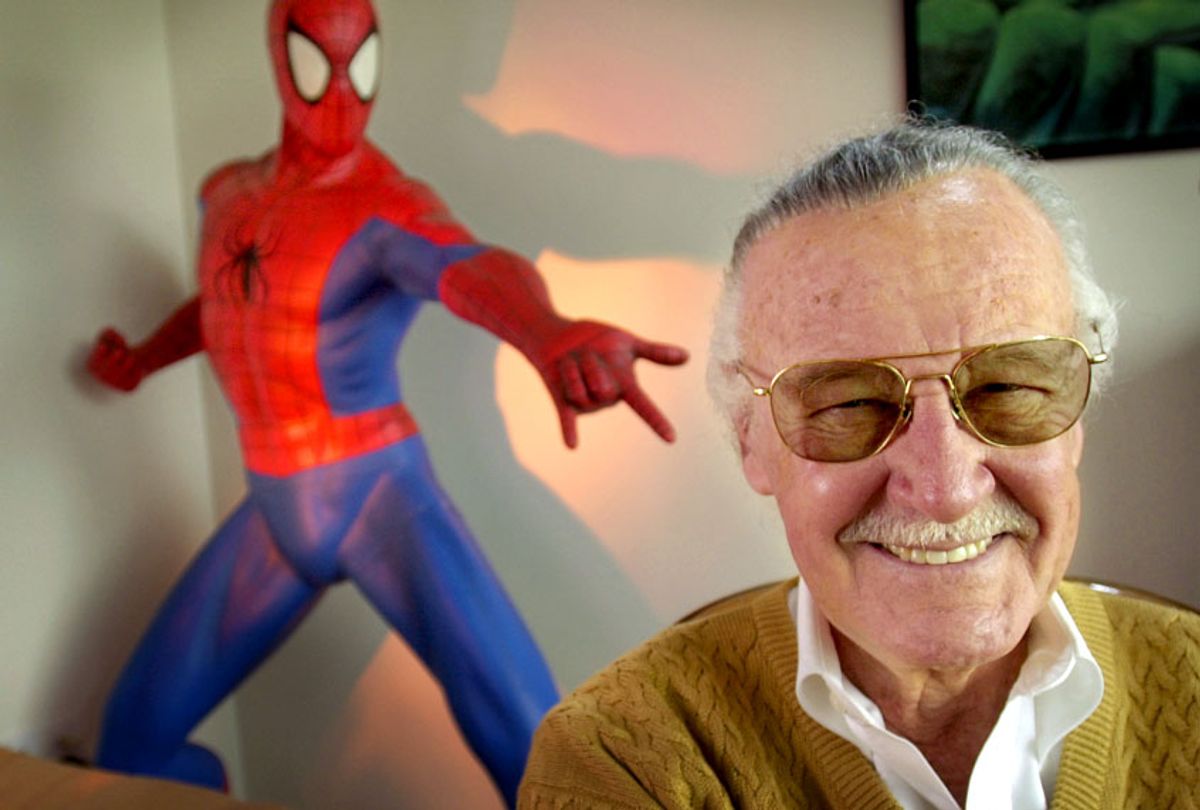 It's time to talk about Stan Lee's legacy as a liberal Jew.

I say this as a liberal Jew myself, one who realizes that anti-Semites love to denounce the stereotypical "liberal Jew" they see as controlling the media and ruining the world. Whether it's in journalism and publishing or Hollywood, the music industry and comic books, the basic complaint is that global culture is suffused with left-wing Hebrews who hold alien ideological beliefs and incorporate elements of those beliefs into their work, often with a sinister agenda in mind.

And here's the thing: Yes, Jews are successful in a number of creative and intellectual fields, and yes, Jews are disproportionately liberal, although that hardly means every Jew is a lefty (looking at you, Stephen Miller, Steven Mnuchin and Ben Shapiro). But if we were talking about any other ethnic group, these things would not be attributed to a sinister conspiracy (which, I can say as a Jewish liberal myself, doesn't exist — or if it does, I've been cruelly kept out of the loop), and they would not be cited as proof of something nefarious about our tribe. They would for the most part be viewed as innocuous, neutral facts that, for people who are Jewish, liberal or both, exist as points of pride, signs that people from a historically oppressed minority group who have "made it" managed to take something from their heritage and use it to leave an imprint on the world.

Which brings us to Stan Lee, and why he means so much to me as a liberal Jew.

Both liberalism and Jewishness were core parts of Lee's identity. Characters like the X-Men and Black Panther were frequently created with the goal of addressing social justice issues like bigotry, and Lee would often use his "Stan's Soapbox" column to influence young children with liberal ideas. Perhaps the most famous of these editorials to make the rounds after Lee's death was published 50 years ago, in a 1968 comic book.

"Let's lay it right on the line," Lee wrote. "Bigotry and racism are among the deadliest social ills plaguing the world today. But, unlike a team of costumed super-villains, they can't be halted with a punch in the snoot, or a zap from a ray gun. The only way to destroy them is to expose them — to reveal them for the insidious evils they really are. The bigot is an unreasoning hater — one who hates blindly, fanatically, indiscriminately. If his hang-up is black men, he hates ALL black men. If a redhead once offended him, he hates ALL redheads. If some foreigner beat him to a job, he's down on ALL foreigners. He hates people he's never seen — people he's never known — with equal intensity — with equal venom."

Lee added, "Now, we're not trying to say it's unreasonable for one human being to bug another. But, although anyone has the right to dislike another as an individual, it's totally irrational, patently insane to condemn an entire race — to despise an entire nation — to vilify an entire religion. Sooner or later, we must learn to judge each other on our own merits. Sooner or later, if man is ever to be worthy of his destiny, we must fill our hearts with tolerance. For then, and only then, will we be truly worthy of the concept that man was created in the image of God — a God who calls us ALL — His children."

Lee never abandoned those views, reiterating them last year as white nationalists marched on Charlottesville to denounce Jews, African Americans, immigrants and other non-white groups. Last fall, he also told his fans in a video that "Marvel has always been and always will be a reflection of the world right outside our window. That world may change and evolve, but the one thing that will never change is the way we tell our stories of heroism."

"Those stories have room for everyone, regardless of their race, gender or color of their skin," he added. "The only things we don’t have room for are hatred, intolerance and bigotry."

This isn't to say that Lee didn't have his blind spots. For one thing, Lee remained adamant until as late as 2015 that Spider-Man should only be depicted in the movies as a straight, white male. The early Spider-Man comics also contained blatant sexism, while early versions of the Fantastic Four, Iron Man and Hulk incorporate knee-jerk Cold War rhetoric into the heroes' motivations apparently without a second thought. The vast majority of Marvel heroes in general were straight white men, a legacy still seen today in both the casting of most Marvel movies and the lamentable fact that many comics fans have a sense of entitlement regarding those properties remaining predominantly white and male (see the harassment experienced by many female comic book creators or the backlash directed at Michael B. Jordan when he was cast as The Human Torch). As the cliché goes, Lee was a product of his time, and for every Stan's Soapbox like the legendary 1968 column, there were other ideas in his work that were stuck in the reactionary assumptions of his era.

Yet the fact that Marvel has overwhelmingly been a force for promoting liberal ideals — a truth reinforced earlier this year when "Black Panther" became a mega-blockbuster — is beyond dispute. It is something that I identify with as a Jew because, like Lee, I believe that it is important for those of us who have a platform to use that voice to help others. While there are millions of people who feel this way who aren't Jewish, the uniquely Jewish aspect of this belief comes from the knowledge that Jews have experienced terrible discrimination for so many years. As a result, many Jews who are lucky enough to have had a measure of success feel an obligation to pay it forward, with ideological liberalism being the metaphorical check that we give to others who need and deserve the same good fortune from which we have benefited.

If this sounds like another way of saying that with great power comes great responsibility — that is, Spider-Man's mantra — that is not a coincidence. Take this passage from Haaretz published after Lee's death:

We all know Spider-Man’s wise and somber mantra “With great power comes great responsibility.” But is it also a biblical quote?

Sounds like a good question for a rabbi. And this was in fact the semi-serious query Rabbi Simcha Weinstein had to field from none other than Stan Lee – the comic-book legend who co-created Spider-Man and came up with Spidey’s motto, and who died Monday at 95.

“He felt he had pulled it right out of the Bible; he half-jokingly asked me if it was in there,” recalls Weinstein, a New York City-based rabbi who also writes books about comics and their link to Judaism. “I jokingly responded that it must be in one of the commentaries.”