Willem Dafoe on painting Van Gogh's shoes: "It's his attempt to paint the soul of something" 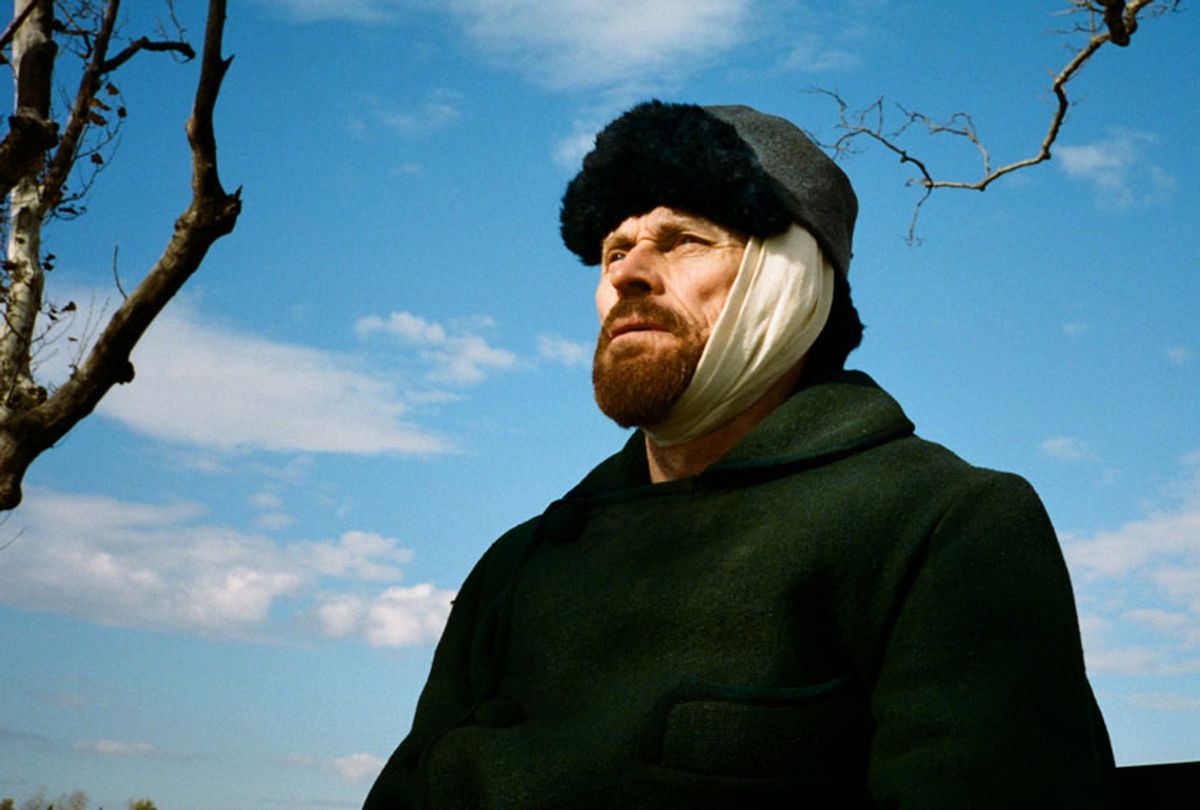 Willem Dafoe received his third Best Supporting Actor Oscar nomination for his turn in “The Florida Project” last year. This year, the actor deserves a Best Actor Oscar for his phenomenal performance as Vincent Van Gogh in “At Eternity’s Gate.” This remarkable film, directed by artist-turned-filmmaker Julian Schnabel, depicts the Dutch impressionist during the period he lived in Arles and Auvers-sur-Oise. It is a fascinating meditation on art and the creative process.

In the Arles scenes, shot with a handheld camera, Schnabel immerses viewers in Van Gogh’s communing with nature. There is an urgency and a sensitivity to these ecstatic moments of the artist sitting in a field, just embracing the beauty of the countryside that inspires him. (These scenes might seem pretentious, but in Schnabel’s assured hands, they are dazzling, and meaningful). However, Van Gogh is often lonely, and longs for the companionship of his brother Theo (Rupert Friend) or fellow artist Paul Gaugin (Oscar Isaac). He experiences severe bouts of madness and depression. “At Eternity’s Gate” features several scenes of the artist in institutions, especially after he famously cuts off his ear.

Dafoe’s impassioned performance in a tailor-made role captures Van Gogh’s emotions and his fragility well. It is clear why he paints, how he sees things others don’t, and how he is impacted by faith and despair. Dafoe is particularly expressive when Van Gogh is painting or not saying anything. But he also conveys his thoughts and feelings in conversations with a priest (Mads Mikkelsen) or a doctor (Mathieu Amalric) who are concerned about his mental health.

The actor, who has two other projects coming out in the next few weeks — “Vox Lux,” where he provides the film’s voiceover narration, and “Aquaman” where he plays Nuidis Vulko — spoke with Salon about playing Van Gogh, his artistic process, and making “At Eternity’s Gate.”

Do you collect art?

I have collected mostly friends and young artists, but I’ve been so nomadic in the last 15 years, that’s been less true. I like both drawings and paintings. I came of age as an actor in New York and was very impacted by the visual artists. It’s always been part of my life.

Is there a particular painting of Van Gogh’s that moves you?

It changes all the time. What is my favorite? Since the movie, I have a deeper appreciation of his work. Before I made the film, I couldn’t see the beauty of the shoes paintings, but after making the film, I have a special relationship with them.

I love the scene of you as Van Gogh painting the shoes! It was as if you were anticipating how Van Gogh saw what he saw. Can you talk about that aspect of playing the character?

That sequence was very important and stressful for me. I knew I was going to paint those shoes in real time. I practiced, and Julian coached me. But doing it in real time and on film, I was anxious about it. But it’s a good sequence. Watching it as an audience, for a long time, [the canvas] looks bad—the colors look wrong, it’s not a good likeness, but, then, with some color choices, and some marks, it comes into focus and captures those shoes. And for an audience to see that early in the film is important; it’s his attempt to paint the soul of something, not just a good likeness. Painting is a convention to see what’s there. This scene illustrates that and how a series of independent marks work together to create something that becomes pictorial and revealing.

What can you say about your preparation for the role? How did you approach such a well-known figure, and a person who has been the subject of numerous films?

I read some biographies and was familiar with the letters. As Julian and Jean-Claude [Carrière] were writing the script, they asked me to go through the Steven Naifeh and Gregory White Smith book. I took notes, and quotes from his letters to Theo. I sent those notes off and they incorporated them into the story. I did do some conventional research, but I forgot I was playing Van Gogh. Those quotes were an inner dialogue with myself as I was doing the prosaic daily things in the film. I think back to playing Christ in “The Last Temptation of Christ;” I forget I was playing Christ.

Van Gogh says in the film he sees what no one else sees. He shows his work to others to give them hope and consolation. To make people feel alive. He also says God gave him the gift of being able to paint. It allows him to share what he feels. Painting stops him from thinking. What observations do you have about Van Gogh’s mindset? He acknowledges the grain of madness.

All these things you said — you read the greatest hits of the quotes of Van Gogh. I never thought about his madness. He had a connection [to beauty] through nature, or through God, or in a way he thought he could express through painting what was more real than the reality that we normally see. It was so intoxicating that he’d lose consciousness. He struggled with his gift. He had many social problems. That stress came out and confused him. I’m not thinking of those things; they are accomplished because he speaks little about these things. He’s mostly involved in painting. Only in his intimate conversations with his brother does he confesses anxieties and fears about his mental state. In his letters, he talked about how he was thankful for this mental state that allowed him to be reckless. He appreciated the isolation. These visions were a private dialogue he had.

Van Gogh in the film also says, “I am my paintings.” Are you your movies, or characters? Surely you identify with the roles to play them, but…

[Laughs]. I am, in a way. I’m always stressed that as I get older, I remember my life by the movies I made. Not that I’m those characters, but they remind me of my mental state and what was going on in my life. The characters are projected in this prism of narratives, but to fuel playing those characters, I am using myself.

Van Gogh talks about his relationship to eternity. What are your thoughts on legacy, your body of work? Van Gogh says he doesn’t care what people think. Do you crave approval?

Sure, I think everybody wants to be of service and encouraged, of course. But I can’t be thinking about it when I’m doing it. That corrupts you and takes you away from your impulses and you don’t want to do that as an actor. You want contact with something mysterious and wondrous and can’t be managing that to package it for other people. That’s why I like being an actor. It’s free and direct what you’re doing. You want people to enjoy what you do, so you can create more opportunities. Actors need people to do what they do. Unless they do a one-man show, and one-man shows never attracted me. You won’t see me doing Mark Twain anytime soon.

The film presents the story of Van Gogh cutting off his ear, and his death, both topics, which have been discussed at length, but never confirmed. What do you think? How do you interpret his actions?

I think the death in the film is nicely ambiguous. We don’t connect the dots, so people can create their own narrative. But in the context of the film, it’s important that he died, and died prematurely. There are huge debates on what happened and there are evidences and hypotheticals, but I’m not interested in that. It’s about the contact he had and what he was striving for in his painting, his artistic process, and his relationships. This is the mantra—it’s not a forensic biography. We’re not explaining, we’re making something that is our Van Gogh.

I’d love to get your thoughts about the forthcoming “Vox Lux,” as you provide a very compelling narration for that film. Can you talk about that project, which, like “At Eternity’s Gate” deals with issues of art, fame, celebrity, and madness?

I’ll let you write about the connections between the films as I don’t feel equipped to. I was happy to participate in “Vox Lux,” and had been following Brady Corbet’s work. At the last moment, he needed a different voice and he sent me the text. I liked the text — it was interesting and a challenge. The tone was not easy to get, but it was essential to the film. It was intense.

I liked the scene in “At Eternity’s Gate” of Van Gogh fighting with the children. What pushes your buttons?

[Laughs] In my life? Oh, God. I’m getting less and less angry as I get older. I think I get angry now at things that are not just.