How low can he go? Trump still yearns to "lock up" Hillary, but says "who cares?" on Khashoggi killing 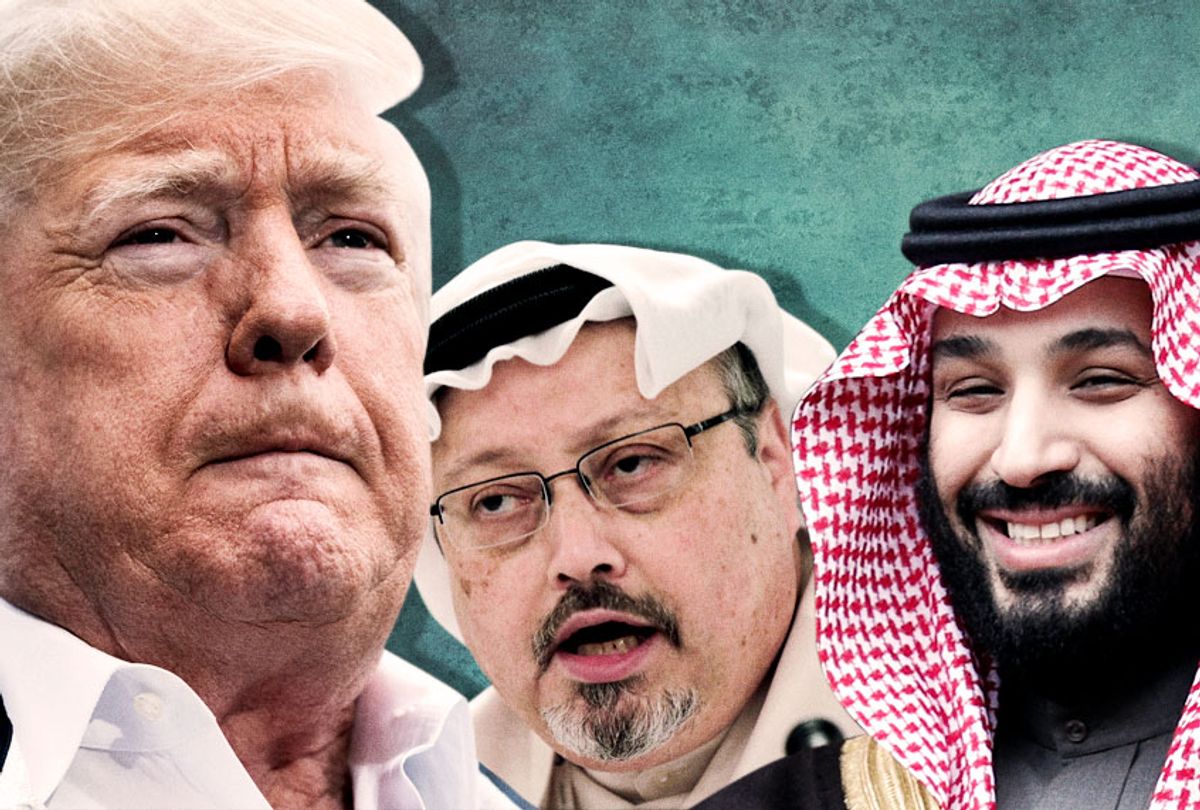 Last week, the Federalist Society grand poobah Leonard Leo, widely credited as the mastermind behind Trump's extremist court-packing scheme, got into a bit of spat with another high powered conservative legal luminary. That would be George Conway, the prominent Trump critic who is also the husband of Trump senior adviser Kellyanne Conway. Leo was upset because Conway had started a legal organization called Checks and Balances, which is dedicated to opposing Trump's abuse of presidential power and degradation of the rule of law.

Leo said he found the whole concept outrageous. Just because the president spouts off day and night wondering why the Department of Justice isn't jailing his political rivals and demanding that its top officials pledge fealty to him as he imagines Joe McCarthy's lawyer (and Trump mentor) Roy Cohn would have done -- well, isn't an abuse of power unless he takes action.

I measure a president's sensitivity to the rule of law by his actions, not his off-the-cuff comments, tweets or statements. And the president has obviously had lots of criticisms about former Attorney General Sessions and about the department, but at the end of the day, he hasn't acted upon those criticisms.

Needless to say, every time Trump tweets or comments about what he thinks should be done it conveys a very clear message. The fact that career officials have not completely carried out his wishes does not mean they haven't had an influence. Trump apparently learned that lesson and has put Matt Whitaker, a shameless lackey, in place as acting AG to keep him apprised and follow his orders when he gives them.

One of Trump's longstanding desires, going all the way back to the 2016 campaign, was to see his opponent Hillary Clinton imprisoned. His crowds still gleefully chant "Lock her up!" which likely has led Trump to believe that prosecuting Clinton (for something) would be a very popular decision. I've been sure that he was serious about that for some time, largely because he keeps saying it. Contra Leonard Leo, he has actually succeeded in having the DOJ take action.

Recall that under pressure from Trump, Fox News and GOP henchmen in the House, Sessions assigned a Trump-friendly U.S. attorney in Utah to investigate Clinton's alleged Russia connection, a bogus charge on which she'd already been investigated and cleared. None other than the reformed maverick and born-again Trumper, Sen. Lindsey Graham, R-S.C., who will take the gavel as chair of the Senate Judiciary Committee in January, has said he is eager to investigate Hillary Clinton.

On Tuesday, the New York Times validated my assumptions about Trump's seriousness. The paper reported that former White House counsel Don McGahn had to talk Trump out of ordering the Justice Department to prosecute Clinton and former FBI director James Comey, explaining that it could lead to his impeachment for abuse of power. The Times report isn't specific about when this happened, only saying it was last spring. But that's also when Sessions assigned the imaginary Clinton case to the Utah U.S. attorney's office, so it's likely this was all happening at the same time. (Sessions said at the time that this would obviate the need for a special counsel, for which Fox and the House henchmen had been agitating.)

Today, McGahn and Sessions are gone. FBI director Christopher Wray, Comey's successor, has not been mentioned as one of the senior Trump appointees on the chopping block. But the Times reports that Trump is unhappy with Wray because he's "weak" for failing to go after Clinton, so who knows?  The article says Trump frequently brings up the notion of prosecuting Clinton, suggesting he hasn't given up on it.

If that grotesque illustration of Trump's authoritarian instincts wasn't bad enough, I'm afraid Tuesday brought an even worse example. The world has been waiting for our government to offer some kind of official conclusion about the murder of Jamal Khashoggi, the Washington Post journalist and U.S. resident who was killed inside the Saudi consulate in Istanbul last month. It got one in the form of a White House statement written as if it had originally been a series of presidential tweets, replete with exclamation points.

Basically, the president declared that despite the high confidence of his own intelligence community, we can never know for sure if Crown Prince Mohammed bin Salman ordered Khashoggi's murder. Even if he did, it doesn't matter, because he also promised to buy a lot of weapons from the U.S. and that's what really matters. In other words, the world's most powerful superpower can be bought off. (The arms sales Trump endlessly references are only theoretical so far -- Secretary of State Mike Pompeo says they're still being "negotiated.")

Autocrats and dictators must be very relieved to know that all they have to do is hand over the envelope and the American capo di tutti capi will look the other way when you "take care of business" -- if you know what I mean.

Axios reported last week that Trump had never really cared whether or not the crown prince had ordered this grotesque assassination because "other countries do bad things too." This is consistent with his general amoral attitude toward world affairs. He consistently attacks the leaders of Western democracies for failing to pay proper tribute and makes excuses for tyrants and dictators. As the president wrote in his tweet-style official statement, "the world is a very dangerous place!" Apparently this means we can't even afford to pay lip service to such niceties as international law or common human decency; certainly not when there's money on the table.

Just in case everyone didn't get the message, Trump added that "some say" Khashoggi was an "enemy of the state," echoing his own frequent complaints about the press here at home. (Can you hear me, Jim Acosta?)

Happy Thanksgiving, America. Your president has just proved beyond a reasonable doubt that he is operating as a reckless, lawless mob boss who seeks to use the power of his office for money and revenge. (And he's personally making more than a little scratch for himself in the process.) If that sounds like the work of an organized crime family running a shakedown, that's because it is. "Nice little democracy you have here -- be a shame if anything happened to it."