Disney's latest offers smart satire about sexism, friendship and cyberspace in a sequel that surpasses the original 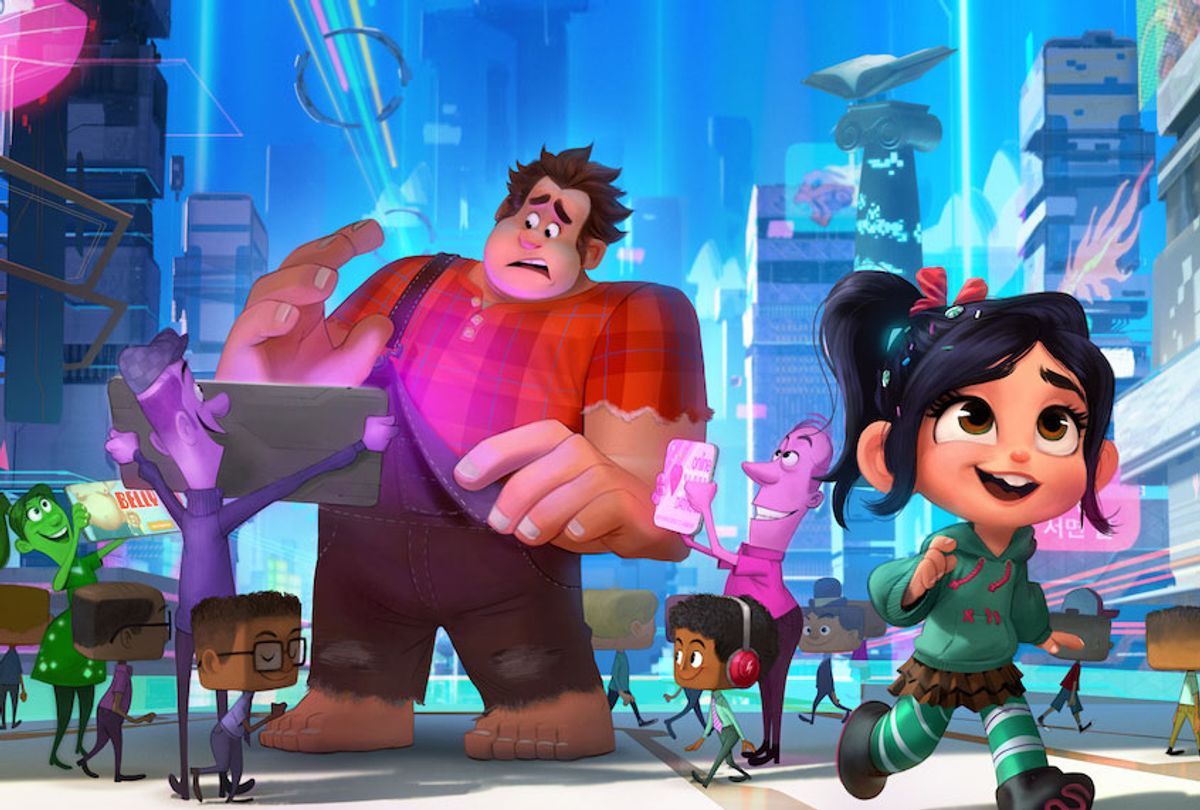 "First rule of the internet: Don't read the comments."

I suspect that anyone who has used the internet will find at least one moment from Disney's new animated film "Ralph Breaks the Internet" that resonates with them. For me it was this one: Wreck-It Ralph (voiced by John C. Reilly), the muscle-bound hero of the movie, is standing in a room where he can see all of the comments being posted under a series of videos he created for a YouTube-like site. They pile up in real time, one on top of the other, and the vast majority are deliberately hurtful. Although he tries to shrug off the pain, an algorithm named Yesss (Taraji P. Henson) sees that he is suffering and offers the above words as comfort. It is one of many moments in the movie inspired by the life lessons one acquires after spending enough time online, and as a writer who has had literally thousands of comments posted under his articles, it hit home.

This is one of two takeaways from "Ralph Breaks the Internet," that rare sequel which qualitatively surpasses the film that preceded it. While "Wreck-It Ralph" told the story of a video game bad guy with an existential crisis, and used that premise to make a number of smart jokes about video games and gaming culture, "Ralph Breaks the Internet" expands that idea and applies it to cyberspace. After Ralph accidentally breaks the video game home of his best friend Vanellope von Schweetz (Sarah Silverman), the two chums go online to find the part they'll need to repair the damaged arcade machine and save Vanellope's home. Yet even as they both attempt to raise the money necessary to buy what they need, Vanellope finds herself tempted to abandon the arcade and join a game called "Slaughter Race," which will provide her with a breadth of new experiences as well as the mentorship of a top racer named Shank (Gal Gadot).

This is where "Ralph Breaks the Internet" does something rather bold. Instead of driving its plot with a MacGuffin (which the video game part initially seems like it will be) or a villain (which this movie doesn't really have), the forces working against Ralph and Vanellope are confined to their inner struggles. For Ralph, it's his fear that Vanellope will end her friendship with him once she moves on to other things in her life; for Vanellope, it's her insecurity about making changes that could result in her finding happiness but which could also cause her to fail.

It is to the endless credit of "Ralph Breaks the Internet" that it doesn't shy away from the painful truths that people have to face when confronted with those dilemmas. Instead it argues, with a maturity that even many adult films lack, that one can have a happy ending while accepting the bittersweet that comes with life. Sometimes the relationships we treasure the most need to evolve, and perhaps even become more distant, so that the people we care about can meet their own needs. And sometimes the destiny that is right for us will be scary — but we have to embrace that fear, not run away from it, in order to grow as human beings. These are important lessons for children to learn, and "Ralph Breaks the Internet" presents them poignantly without becoming preachy or making the movie into a drag.

That last point can't be emphasized enough: While I may have made "Ralph Breaks the Internet" sound depressing, 90 percent of the film is a delightful romp. There are pop culture references galore to Disney princesses, Marvel superheroes, Star Wars and video game characters. Internet staples like computer viruses, spam, pop up ads, search engines and mega-sites like Google, Twitter, eBay and YouTube (as "BuzzTube") all get a good-natured ribbing whenever possible. As with the first "Wreck-It Ralph" movie, it's clear that the creators of the sequel recognized that they had a golden opportunity to pack their film with clever jokes and didn't want to squander it. For every film like "The Emoji Movie," which cynically stuffs references into their story so that the trailers can lure in an audience, there are ones like "Ralph Breaks the Internet" which view referential comedy as a medium for saying something intelligent and funny.

This review would be remiss if I didn't mention the controversy surrounding its gender politics. I first noticed this when the initial trailer dropped and YouTube commenters expressed horror at a scene in which Vanellope commiserates with Disney princesses about sexist tropes in movies (the trailer also got an unusually large number of dislikes, which tends to happen with movies that are feminist or perceived as such). One rant cleared its throat by saying "Time to roast the feminists in this movie." Another long-winded lecture included the transparently insincere claim that "it's not the fact that they made a feminist joke that bothers me, it's more that the joke feels like such a lazy cheap shot and really doesn't make complete sense." Still another comment tipped its MRA hand by exclaiming "I hope that Jordan Peterson is in this movie, so that he can explain the male hero archetype to all the Disney princesses. Also, I think that it's funny that Merida looked super annoyed the entire time." And, of course, there were plenty of YouTube videos entirely devoted to deconstructing the trailer's message in ways that took jabs at modern feminism.

I am happy to say that the misogynists' worst fears were realized. This is very much a movie whose female characters are equal to their male counterparts, from Shank and Vanellope to Yesss and the Disney princesses (gamely played by many of their original voice actresses, including Ming-Na Wen's Mulan, Auliʻi Cravalho's Mulan, Jodi Benson's Ariel, Mandy Moore's Rapunzel and Idina Menzel's Elsa). Perhaps more notably, the events that put Vanellope's life in danger are caused by Ralph's unwillingness to accept his own vulnerability. He is needy, clingy and afraid of losing his best friend, but instead of addressing his fears in a healthy way, he tries underhanded and manipulative tactics in order to force his will on her. As a result, his toxic behavior winds up being literally embodied in a giant monster that threatens to destroy the entire internet unless he can convince both it and himself to grow up.

While that un-subtle metaphor provides the movie with its climax, and the earlier moment on the BuzzTube comments section was a passing scene, they both pointed to the same message — that cyberspace is a place where dreams can come true, but can also become nightmares. "Ralph Breaks the Internet" has a lot to say about how the internet brings out the best and worst in people, and in the process becomes a wonderful film appropriate for all ages. And a lot of those people are the very ones who are most opposed to it.