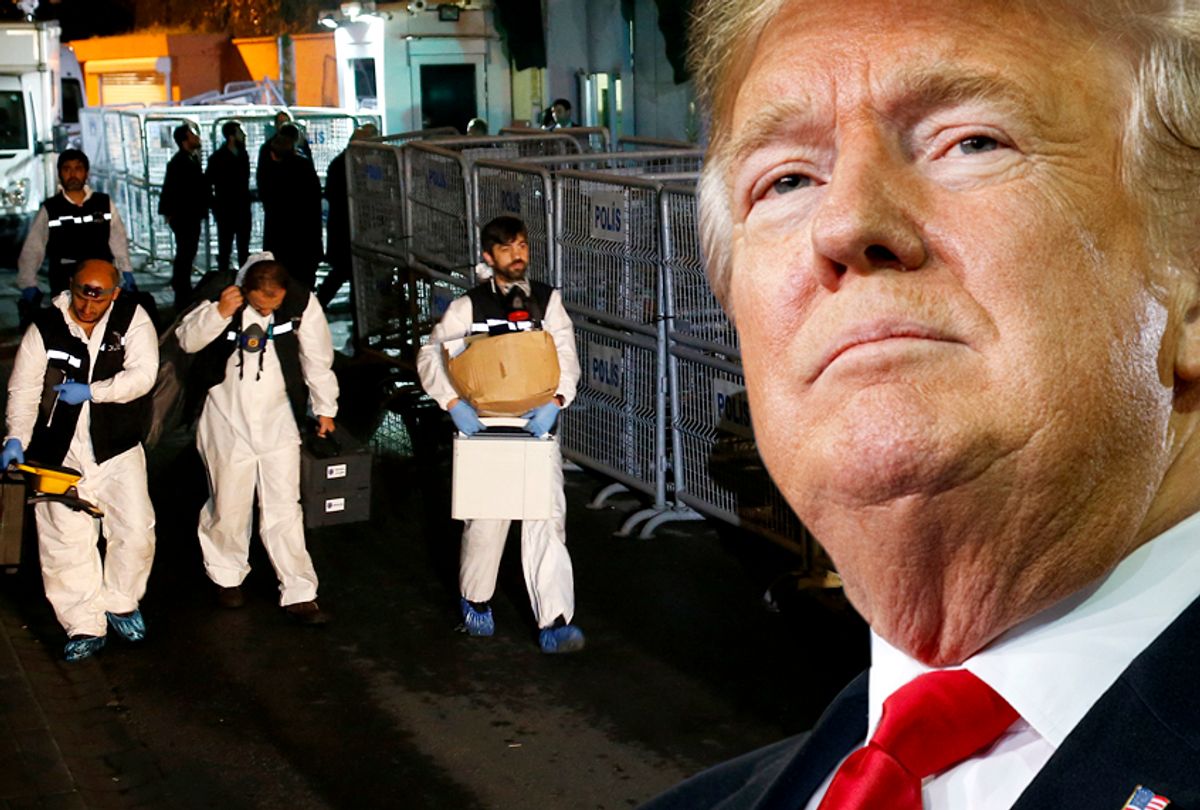 Turkish forensic officers leave the Saudi consulate with evidences after they conducted a new search over the disappearance and alleged slaying of writer Jamal Khashoggi, in Istanbul, early Thursday, Oct. 18, 2018. (AP/Salon)
--

"I never thought I’d see the day a White House would moonlight as a public relations firm for the Crown Prince of Saudi Arabia," Sen. Bob Corker of Tennessee wrote on Twitter on Tuesday while including a link to Trump's statement.

He added in a pair of additional tweets, "Congress will consider all of the tools at our disposal to respond, including requiring by law a determination on the role of MbS" and "'Maybe he did and maybe he didn’t' won’t cut it. So tonight, @SenatorMenendez and I sent a second Global Magnitsky letter to the president requiring that he specifically determine whether Saudi Crown Prince Mohamed bin Salman is responsible for the murder of Jamal #Khashoggi."

Corker also tweeted a copy of the second Global Magnitsky letter sent by himself and Sen. Bob Menendez, D-N.J., to determine if Mohammed bin Salman is responsible for Khashoggi's death, stating in the tweet itself that "under the law, the president is now required to determine whether MbS is responsible and report to our committee with a determination and a decision on the imposition of sanctions."

The first two tweets took swipes at President Barack Obama, arguing that "under the law, the president is now required to determine whether MbS is responsible and report to our committee with a determination and a decision on the imposition of sanctions. Time and time again President Obama chose to look the other way as Iran took increasingly provocative actions. Each time it led to even worse Iranian behavior and created even larger problems for the future."

His final four tweets on the subject extended the logic used to criticize Obama toward Trump.

"Likewise, it is not in our national security interests to look the other way when it comes to the brutal murder of Mr. Jamal #Khashoggi," Graham wrote. "I firmly believe there will be strong bipartisan support for serious sanctions against Saudi Arabia, including appropriate members of the royal family, for this barbaric act which defied all civilized norms. While Saudi Arabia is a strategic ally, the behavior of the Crown Prince – in multiple ways – has shown disrespect for the relationship and made him, in my view, beyond toxic. I fully realize we have to deal with bad actors and imperfect situations on the international stage. However, when we lose our moral voice, we lose our strongest asset."

Sen. Rand Paul of Kentucky joined Corker and Graham in breaking from party ranks to denounce Trump's letter — although he attempted to provide some cover for Trump.

"The President indicates that Saudi Arabia is the lesser two evils compared to Iran and so the US won’t punish Saudi Arabia for the brutal killing and dismemberment of a dissident journalist in their consulate. I disagree. We should, at the very least, NOT reward Saudi Arabia with our sophisticated armaments that they in turn use to bomb civilians," Paul wrote in his first two tweets. He then attempted to provide Trump with an out by speculating, "I’m pretty sure this statement is Saudi Arabia First, not America First. I’m also pretty sure John Bolton wrote it. I will continue to press for legislation to stop the Saudi arms sales and the war in Yemen. Let’s put America first, not Saudi Arabia."

In his controversial letter Trump wrote, "King Salman and Crown Prince Mohammad bin Salman vigorously deny any knowledge of the planning or execution of the murder of Mr. Khashoggi. Our intelligence agencies continue to assess all information, but it could very well be that the Crown Prince had knowledge of this tragic event -- maybe he did and maybe he didn't!"