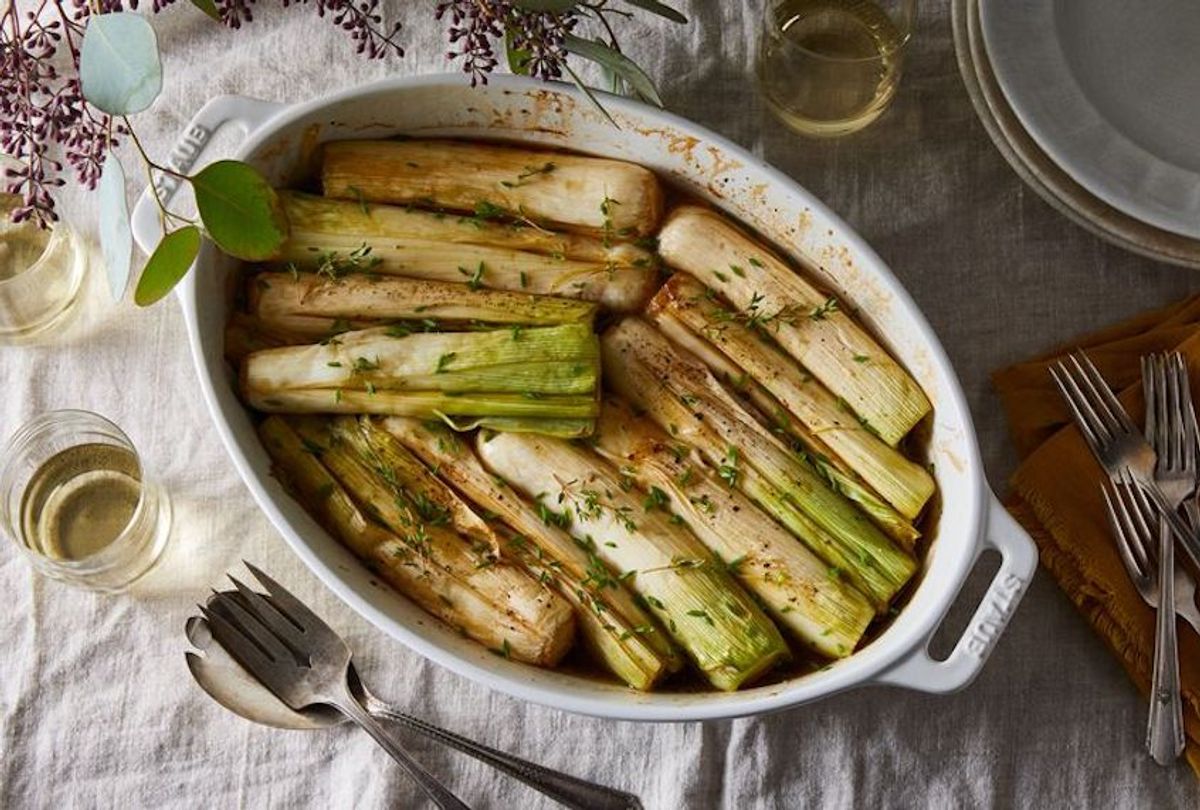 For years, my favorite Thanksgiving side dish has been a relatively humble casserole dish filled with soft, saucy braised leeks. I’m not sure exactly when my mom added this to the rotation, but it’s so popular amongst my family, that there’s likely to be a riot if she were to leave it off the menu now. It’s not a complicated dish: It involves relatively little prep time, very few ingredients, and is definitely user-friendly (seriously—it’s pretty hard to mess up). But the dish itself, which is deeply flavorful and homey, is primarily special to me because it begins as far back as late April, when my parents plant the leek seedlings in their garden.

My parents have always been avid gardeners. When I was young, this meant huge, manicured gardens filled with hostas and daylilies. There was a rainbow of irises that started at the head of our long driveway and followed you almost halfway down. My parents even planted a huge bed of wildflowers that was meant just for me to play in and pick from. But over the years, the amount of space dedicated to flowers has dwindled a bit, as my parents began to focus on edible plantings — many of which included ingredients they wanted to cook with that they couldn’t necessarily get in nearby stores.

"Veggies fresh from our own garden are incomparable to anything from the store," my mom tells me, "so it's a unique gift we can give to our family.”

My parents grow the best melons I’ve ever tasted. Their okra plants exploded one year, climbing several inches taller than my dad. They even grow their own garlic, then carefully harvest and dry enough of it to last them the entire year (and these folks aren’t shy about the amount of garlic they use). They spend the summer harvesting and preserving on tight schedules to keep up with the bounty their little gardens produce. They maximize the growing seasons the best they can — which is important in Kansas, where summers are hot and dry, and winters are bitterly cold and windy. There’s often not much time for proper springs or autumns in between.

When they first plant the leeks in the spring — 60 to 80 of them in two rows, each about 30 feet long and two feet wide — the plantings are as thin as blades of grass. The goal is to have enough leeks to cook with throughout the fall for soups and pastas, but also to allow at least one leek per person come Thanksgiving Day.

My parents tend them carefully in the first few weeks. The soil must be wet until the seedlings, which are tiny and quite fragile, are well established. They also “hill” the plantings during this time, which means they pull up more soil from around the base around the plant. This helps to blanch the bulb, ideally achieving a longer white portion of each leek, and less green stem. My parents will do this two to three times in the spring, finally mulching them with prairie hay they get from a neighbor. They’ll re-mulch two to three times, as well, to continue to blanch the leek.

Once the leeks take hold, they’re “very hardy,” according to my mom. My parents continue to weed them as needed throughout the summer, but they may only have to water them if there’s no rain. They’re pretty much on growth autopilot until fall.

When the temperature starts to drop, my parents mulch them one more time — but this time, it’s for warmth and protection to extend their growing season. They mulch the plant very high up, leaving only a few inches of green stem peeking out over the top. The leeks can even survive a few frosts this way. “Freezing makes them sweeter,” my mom says. We’ve kept them in the ground and used them as late as March the following year.

But the largest leek harvest comes a few days before Thanksgiving, when my mom pulls them from the ground. I find it so exciting, the first signs of the feast to come. She cuts off the roughest part of the dark green top while she picks. My dad collects the leeks in a wheelbarrow and does an initial cleaning and trimming outside to get rid of any useless parts, and to remove the bulk of the dirt on the outside. Scraps are composted, and then the leeks head to the kitchen.

The bulb end is trimmed to remove any root ends, then the leeks are split vertically down the middle, leaving the bulb in tact by about one inch at the base. The split leeks are washed thoroughly, but because Kansas soil is less sandy, they're often not as dirty in the middle as leeks you may get at the store. My mom wraps the leeks in damp paper towels and reserves them in sealed plastic bags until she’s ready to use them.

The leeks are braised, covered, in a small amount of broth on the stovetop (my mom uses turkey or chicken broth, but you could easily use vegetable broth to make this a vegetarian-friendly side). After they begin to soften, they’re transferred to a buttered casserole dish in an even layer. The remaining broth is poured over, then the surface is dotted with butter. You can add thyme — or any herb, really — at this stage, too. Then they do their final cooking in the oven, where they braise further to become totally soft, plump with broth, and bursting with flavor. It’s truly a celebration of the leek itself, a special ingredient augmented with only a few additions to bring out the very best result.

While I’ve made the dish a few times with store-bought leeks away from home (and it was delicious!), nothing can top the perfection of the dish the way my parents make it. Plus, I love the whole experience of this particular tradition: the pre-meal harvest, the diligent cleaning. It’s the perfect example of everything I love about food. The dish itself may be simple, but so much love and care has gone into it, from the ingredients to the preparation.

I’m particularly grateful to my parents for this lesson: They’ve instilled in me a great appreciation for where food comes from, and the delights of cooking with fresh, seasonal ingredients. Though I haven’t inherited their green thumbs, I’m thankful every year that they share theirs with us through the food on our plates, especially around Thanksgiving.