In a rare wildlife success story, the wild turkey population is exploding in California

Fearless in the face of humans, turkeys are appearing all over the state, and even in urban areas like Oakland 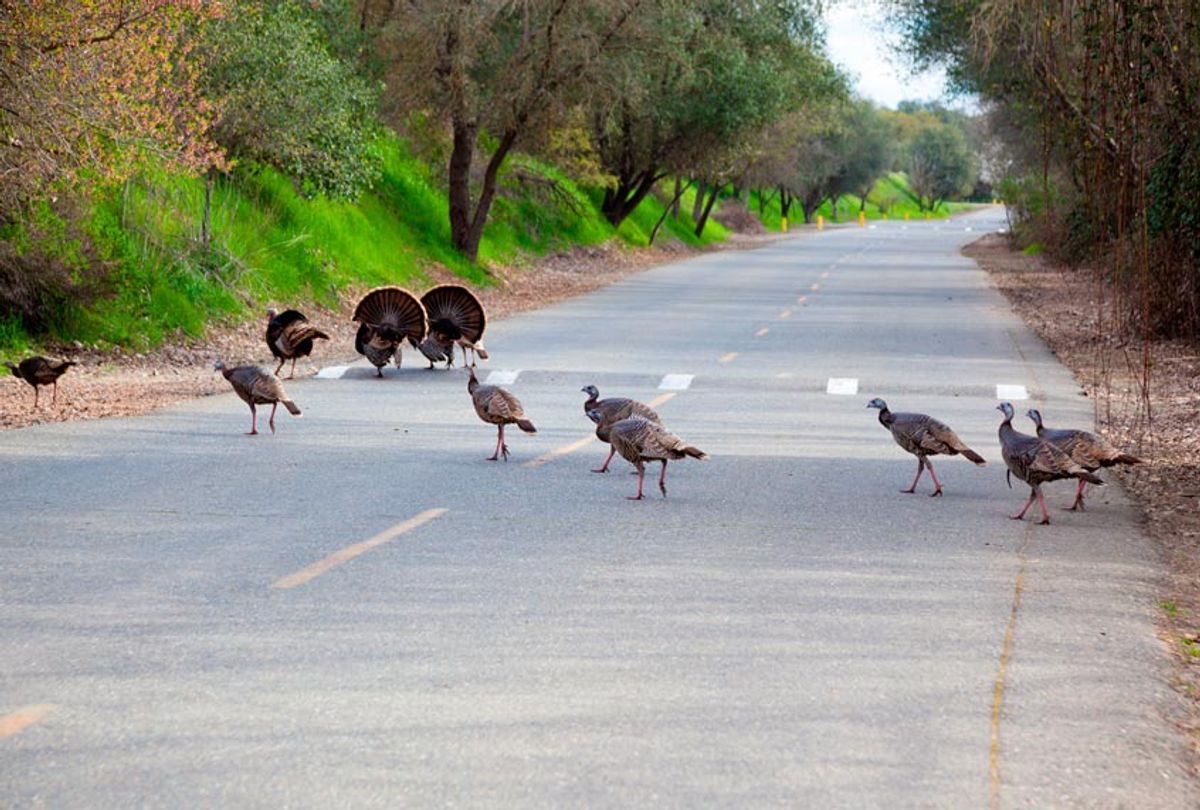 Flock of wild turkeys crossing the street in California. (Getty/slobo)
--

In a climate change–ravaged world where wild animals have become somewhat of an anomaly, it is rare to hear an ecological recovery story. Yet when it comes to animal species who are struggling to survive in the face of human activity, wild turkeys aren’t one of them.

Long considered a beloved symbol of the country — Benjamin Franklin famously waxed poetic over the merits that the turkey had over the eagle when it came to the national seal — the North American wild turkey population shrank down to 1.5 million by the 1970s. From its nadir in that decade, the turkey population slowly grew again, before peaking at 6 million in 2001. Since then, the population of wild turkeys — whose scientific name is Meleagris Gallopavo — has dipped slightly across the nation. In that time, they have found a new home in the state of California, where they occupy an estimated one quarter of the state as a non-native species. And amazingly, their population in the Golden State is on the rise.

“I grew up in Oakland, and there were no wild turkeys around that I saw, growing up in the [Oakland] Hills — but now you see them all over the place,” Peter Tira, a Public Information Officer at California’s Department of Fish and Wildlife, told Salon. “Turkeys have found California to their liking and they are now a permanent part of the landscape. It’s an example of how well they adapt and colonize a habitat."

Wild turkeys made their way into California’s ecosystem as part of a state-sponsored initiative to bring wild game to California. Tira said the effort began in 1888 and had “varying degrees of success.”

“Records indicate the state tried to use domestic turkeys, and breed them in captivity, but they never took hold until the mid 1900s which is when the state began experimenting with live-trapped turkeys, and that was the start of introduction to wild turkey in the state,” he said.

For centuries prior to the late 1800s, turkeys could not be found in California.

“As far as we know there were no turkeys anywhere in California at the time of European contact,” Alan Krakauer, a professor of Evolution and Ecology at the University California, Davis, explained to Salon. “The turkeys we see today descend from 20th century introductions from elsewhere in the U.S.”

At that time in the early twentieth century, wild turkeys all across the country were facing a crisis. Due to colonization, their populations fell drastically. The restoration efforts that followed and gained momentum surely saved them.

Notably, a similar, now-extinct bird, known as the Meleagris californica (or California turkey), did exist in California over 10,000 years ago. Scott Gardner, the Upland Game Coordinator at the California Department of Fish and Wildlife, said it’s the second most abundant bird fossil found in Los Angeles.

Does that mean the rise in wild turkeys are an ecological success story? Krakauer said it’s a bit complicated.

“You can probably give a lot of different answers to this,” he said. “In broad terms, the recovery of wild turkey populations in their native range is quite impressive. Turkey populations were at less than 1 percent of current levels in the late 1800s, early 1900s, so their increase over the past century represents one of the biggest success stories in species conservation.”

The complicated part enters the picture when asking the question in relation to the state of California, because they a non-native species. Since they’re not native, it’s not a restoration effort in California.

“When turkey populations get large, they almost certainly affect native plant and animal populations in some way, but how important these effects are relative to other threats is not well understood right now,” he said. “Most ecologists consider them to be an introduced species here which generally comes with negative connotations. There’s not been much research on these questions. And the same time, here we have this fascinating, charismatic wildlife species that is succeeding in a human-dominated landscape.”

Krakauer said California’s climate is overall pretty good to support wild turkeys which may have factored into their success in the state. “ [It’s] fairly mild climate, along with lots of oak woodland and adjacent grassland,” he added.

Tira added that turkeys are smart birds, too.

"[Their success] just speaks to the fact that turkeys are resourceful and adaptive,” he said. “They are omnivores so they can eat almost everything.”

A turkey takeover does not always equate to a blissful one though. Despite becoming a beloved pop culture phenomenon (à la the car-attacking turkey dubbed "Hank Hatebeak" of the University of California, Santa Cruz, who has his own Facebook page), the resurgent turkeys are often demonized as aggressive, as many media reports attest. Gardner said a turkey attacking a human is rare though, partly because wild turkeys live so well with humans — which could be a trait that dates to when they were domesticated by Native Americans.

“They do well with people, partly because they aren’t intimidated by them,” Gardner said.