Forget the thought. For all of these ridiculous luxury gift ideas, it's the bank account that counts 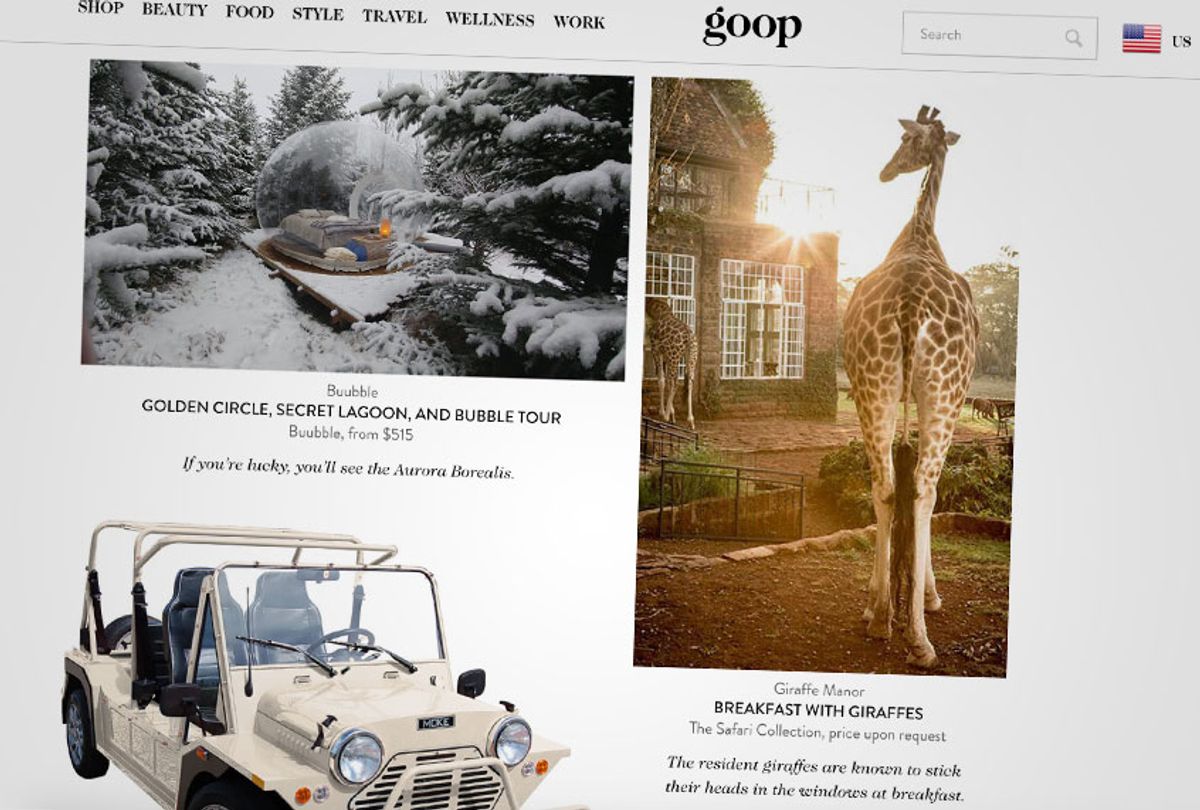 Gifts from the heart are prized and priceless.

On the other hand, there is the gift of real estate in Spain or bespoke adventures led by tennis pros or ex-special forces dudes or Colleen Atwood. Sure, it’s possible that those might come from the heart as well. If we’re being honest with ourselves, though, these are gifts meant to gild the reputation of the giver as much as wow the receiver.

With these gifts, it is the bank account that counts, not the thought. Somebody else has already done the thinking for you.

A year ago, we had terrific fun with Oprah’s Amazon-powered Favorite Things list and a few of its more sublimely laughable suggestions, topmost being a jar full of air simply waiting to be stuffed with papers listing #blessings, attainable for $45.

Leap ahead to Holiday 2018, and it’s telling that the giftable items receiving the highest attention aren’t the 107 that have received the kiss of approval by The Oprah, but the obscene and ridiculous discoveries on Gwyneth Paltrow’s lifestyles-of-the-rich-and-clueless site Goop have been stealing all the sugar and spice as we plunge headfirst into the shopping season.

No doubt you have read about the listing of an entire village in Spain. Just imagine the level of screw-up or the grueling emotional labor the receiver has had to engage in requiring that level of largesse on the part of the giver.

However, Goop is far alone in constructing merry gift guides tilting toward eye-popping conspicuous consumption. Hyper-luxurious gift guides catering to the ultra-rich, i.e. the 1 percent, and the looky-loo 99 percent clicking, scrolling and drooling over items we don’t need but secretly wish we could afford, have always been around.

The only difference is that in 2018 they tell the story of our obscenely maximalist era better than any think piece could. The Economic Policy Institute released a paper in July 2018 that indicated that top 1 percent of families took home an average of 26.3 times as much income as the bottom 99 percent — and those stats are from 2015.

Income inequality has risen in nearly every state, the paper indicates. On the upside, that means it’s very possible that in a few years, your town might be up for sale on Goop.

An unintentional side effect is the various obscenely expensive, radically useless gift suggestions in this and other guides do the average consumer and Oprah a favor, in that they actually make Oprah’s Favorite Things look humble.

And yes, I’m fully aware that I’m taking about a list that includes a bottle of truffle-infused hot sauce.

Let’s break down the Naughty and “Most of Us Can’t Have Nice Things” of it all, shall we?

“Be honest: This is why you’re here in the first place,” the winkety-wink subtitle reads, enticing the curious giver to click and marvel. Then there’s the photo of a banana sporting a golden peel and some unidentified cylinder. Does Gwyneth have novel, new and medically questionable suggestions for giving Christmas cheer to one’s hoo-hah?

Alas, no.  The Lady Business guide is in another section, whereas “Ridiculous But Awesome” is where commoners may aspire to purchase an electric vehicle by Moke billed as known as “the official ride of GP’s wedding,” aka October’s Ridiculousness of the Month, for $16,975. Not bad for a car, if you live in a place where the sun always shines and vajayjay steaming is the cornerstone of a universal health plan.

What about the phallic pieces in the entry window? Well, the banana is a $340 lamp, and the aforementioned cylinder is a “luxe brass capsule” further described as a “sleek, under-the-radar solution for stashing, well, whatever you want stashed.” (But stashed where? Goop does not specify.)

Yes, there are a number of solutions that fit into the “you can put yer weed innit” category throughout Goop’s various gift guide subsections, but only the “Ridiculous But Awesome” area suggests the gift of an $820 incense burner, and king-size 24-karat gold rolling papers, available for the very reasonable price of $55 for six sheets. The additional cost of decorating the interior of your lungs with trace amounts of precious metal is available upon request from your family doctor.

By now you should probably expect there to be a hangover element to some of Goop’s gift suggestions. Even the offer of that relatively affordable Spanish village is probably (read: most definitely) more ridiculous than awesome. True, $172,910 for a village is a steal. Ask yourself: if it’s just sitting there, why hasn’t someone stolen it already?

Even before one dives into a geographical survey or research about local hauntings, a cursory Google search for details about Lugo, Spain yielded a story from The Local.es that opens with this sentence: “In January 2018, passersby at a roundabout in the town of Lugo witnessed a strange scene: five mastiff dogs were eating the carcass of a dead horse.”

Just one savory aspect of the town’s problem with abandoned horses roaming free — proving yet again that Goop’s guides are in themselves gifts that keep on giving. Looking is free; side-eye is most welcome. But buyer beware.

At this point the name Neiman Marcus is more synonymous with a a past dream of high fashion than a shopping reality for most people. Thanks to online forces such as Amazon, the once-formidable luxury retailer is teetering on the brink of bankruptcy.

You wouldn’t know it from a glance at this year’s catalogue. If it is indeed among the company’s last, the unspoken motto declares its intent to go out big and with flair.

Unlike Goop’s glop, the offerings at Neiman Marcus are understandable fantasies, including luxury excursions; a solar-powered yacht; a VIP package to Tennis Majors Events in Paris, London, New York, and Melbourne; and a one-of-a-kind outfit made by Academy Award winner Colleen Atwood.  The questionable part? Said Atwood togs would be inspired by “Fantastic Beasts: The Crimes of Grindelwald.” The witchy look is in this year, but if you're not careful you may be mistaken for a Johnny Depp acolyte, and nobody wants that.

The package also includes a movie swag bag with wands. Wave one, and you can watch $300,000 of your money disappear.

Also, lunch will be served.

The more active guy or gal with everything may desire the Secret Agent experience, priced to move at $315,000, which includes daredevil driving excursions, leaping from planes, and redonkulous hotel accommodations. Not listed are any assurances that said experience will not include any kidnappings by a supervillain who has a tendency to monologue at great length before threatening your nards with a laser. Maybe that would ruin the package’s bonus surprise.

Tech hounds will find just about every reason possible to pay exorbitant amount of money for items the average person would pick up at a Costco based on the merits of whether something works, and whether it fits into their space. Granted, they have their reasons, foremost among them being the wow factors, the superiority of what an item does and the convenience said item offers to their lives in exchange for the many ducats shelled out to obtain it.

But I cannot for the life of me come up with a reason to even covet Hammacher Schlemmer's $185,000 Racing Simulator, a top candidate for the World’s Most Expensive Clothing Rack Pageant 2019.  The sales pitch, other than it being built to order, is that it’s the same machine Ford Motor Company uses to “demonstrate ride experiences” — an understandable machine for a car company, but perhaps less so for a civilian who might be better served by, I don’t know, buying an actual car.

At least that has a purpose. Less defensible is the company’s $35,500 time machine, which is pretty but has none of the features H.G. Wells describes in his books except for, you know, the “telling you what time it is” part.

“Twin ‘laser cannons’ deploy every 20 seconds beneath the main dome, serving as a double retrograde seconds complication,” says the description on the company’s website, “while another dome indicates remaining power of its 40-day capacity with decreasing bars, flanked by a radar dish that rotates 270°.”

Unclear is whether said mechanism includes a crystal setting that allows you to reexamine your life’s priorities.

You don’t need a catalogue to find a crazy gift. But, as this site that makes cataloguing stuff to buy its reason to exist, a little guidance helps. Indeed, without the everlasting retail guide that is MyDomaine.com, however would I have found the world’s annoying example of commodified feminism? That would be this $425 pink cashmere travel set, including an eye mask with “resist” adorably stitched upon it. Perfect for trans-Atlantic flights, instigating a racist outburst from one of your fellow travelers directed at a minority who’s just minding her own business, and the subsequent forced landing in Greenland resulting from such.

Your #woke friends will love it!

Bottom line is, the holiday season presents many opportunities to make fools of us all and part us from our money. ‘Twas ever thus. However, it’s strangely appropriate that in a year in which income inequality and suffocating student debt have topped the list of economic concerns that one of the world’s richest women has, in turn, presented a holiday gift list that feels more sensible and realistic compared to the opulence of years past.

Mind you, that observation is relative. When the average income of the bottom 99 percent is $50,107 per family, describing a $199 foot massager as sensible is pushing it. But how can you financially qualify the joy of  watching Oprah vocalize her way through a toegasm  -- “Oh yeah! Oh yeah! Oh yeah! Get that toe!” -- in the product’s accompanying video review? You can’t. And you can have that for free.

It’s the second video down from the top.

Beyond that, the list includes reasonably priced hideous pajamas for the whole family (in stripes this year as opposed to plaid, ranging from $10 to $45); and “letters for a year of gratitude,” a set of stationery that invites you to reach out and acknowledge your blessings using tangible paper and stamps instead of intangible intentions to be placed in a jar, and costing under $20.

Even this year’s version the artsy Samsung flat-screen TV is thriftier than the $2000 number featured on last year’s list.

Then again, she’s also hawking a $700 juicer, a $200 dog DNA test kit, fashion-forward “onesie for adults” for $168 and a $50 hunk of pannetone in a season lousy with decent pastries baked by the local baker, relative or friend of your choosing.

Financially speaking, these treats may stretch your wallet – but they are financial attainable, don’t come with hidden costs and win points for heart, warmth and good sense.

You know, all those creature comforts prized by the poors. For the Goopsters of the world, there are villages for the buying, gold for the smoking and luxuries for the experiencing.

For everyone else, there’s Amazon.