Community sponsorship of refugees: The way around Trump's crackdown

Refugee resettlement programs are in trouble. Private groups and communities can help fill the gap, for now 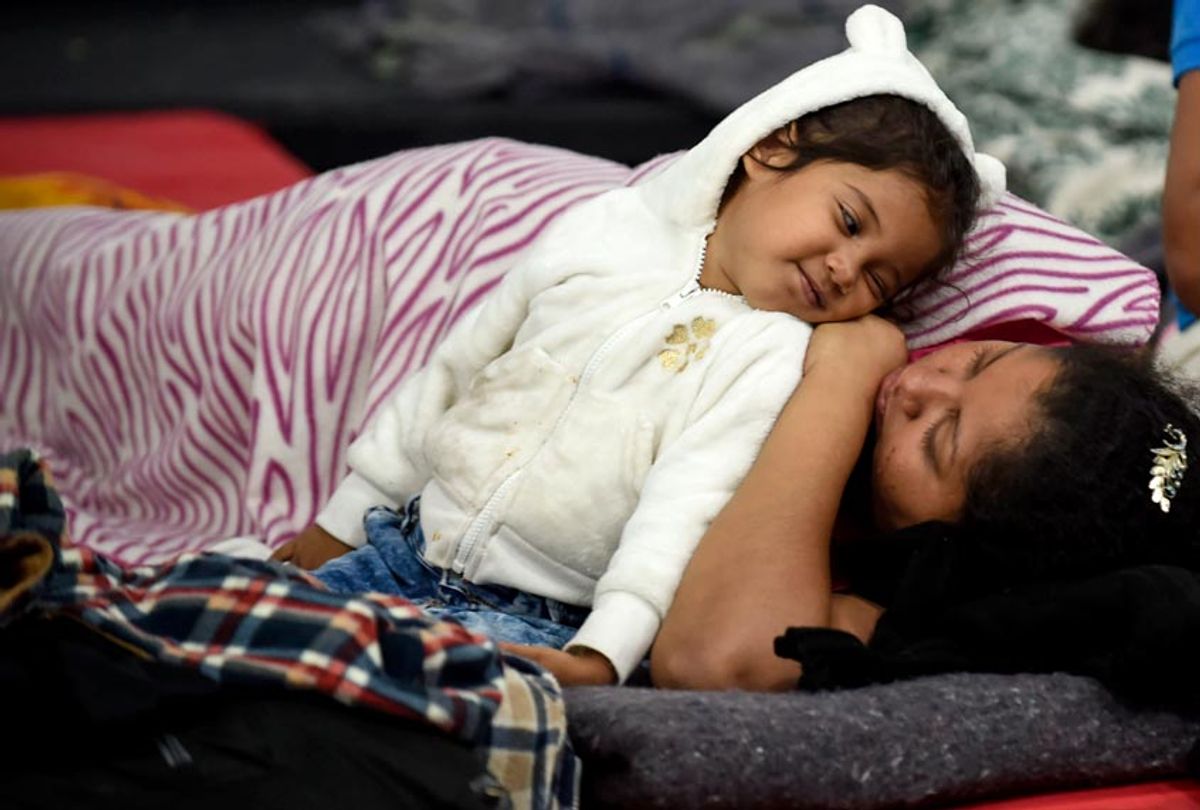 A migrant woman and her daughter, who are taking part in a caravan towards the US, cuddle up to rest during a stop in their journey in Mexico City, on November 6, 2018. (Getty/Alfredo Estrella)
--

Today, the United States refugee resettlement program lingers in a more precarious position than ever before. Less than 23,000 refugees were resettled in fiscal year 2018, and the fiscal year 2019 refugee ceiling is set for 30,000 — the lowest ceiling in the history of the program.

Not only does the lower ceiling impact the sheer quantity of refugees that we resettle in the United States, but it impacts the fiscal health of the nine voluntary agencies that have been resettling refugees for over 40 years. Resettlement offices have been closing nationwide as the total number of refugee arrivals contracts to record lows.

It is critically important to preserve and improve the refugee resettlement infrastructure now, so that there is an adequate system in place to resettle refugees in America when historical resettlement numbers are eventually restored. One strategy to maintain the infrastructure is tapping into private sector interest in supporting refugees that exists across the United States and launching community sponsorship programs that complement current efforts from the voluntary agencies and ensure their survival.

Last year, I had the pleasure of visiting a refugee resettlement group in New Haven, Connecticut, called IRIS (Integrated Refugees and Immigrant Services). IRIS offers a unique community sponsorship program that resettles refugees primarily by relying on community groups, volunteers, and private sector funding. But sponsorship does not replace IRIS; it complements their efforts. Community sponsorship in New Haven engages local volunteers to resettle refugees as a community project, guided by experienced professionals at IRIS who provide the formal infrastructure and oversight. In 2017, more than 600 people were part of the leadership teams that worked to resettle refugees with IRIS, and hundreds more played smaller roles.

While in New Haven, I attended a sponsorship training session where new sponsorship groups participated in refugee resettlement boot camp. In a makeshift classroom with twenty Connecticutians, the day-long seminar explored the ins and outs of the resettlement experience. IRIS staffers presented different sessions on helping refugees find employment, learn English and apply for green cards. There was significant discussion about managing group expectations, delineating roles in the sponsorship groups and talking through solutions to common problems that arise.

Sponsorship groups are made up of at least 10 individuals who can raise between $4,000 to $10,000 to assist a newly-arrived refugee family for about a year. IRIS requires a detailed application that all applicants must use to prove they can provide affordable housing, enroll children in school, provide families with access to public transportation options and local health care providers, help refugees find entry-level jobs and give information about places of worship. Sponsors are of all ages, but because of the high financial requirements for applicants, sponsors tend to skew older. Many sponsors also donate their time and knowledge by scheduling pick-ups for refugees from the airport, arranging receptions to welcome them to their new home and introducing new refugees to family, friends, their new city and the American way of life.

One of the benefits of community sponsorship of refugees — seen in the U.S., Canada, and other contexts — is improved outcomes for the refugees themselves. Sponsorship builds bridges between refugees and their new neighbors, provides needed emotional support during the whirlwind experience of moving to a new country and promotes integration by expanding networks. In fact, studies show employment and language skills are improved by sponsorship..

When NPR’s Deborah Amos visited IRIS, she primarily spent time with sponsors post-resettlement. She highlighted the story of a retired lawyer who helped one refugee family wade through legal requirements of the federal refugee resettlement program; a semi-retired teacher who accompanied the family on medical checkups and a team leader who assigned tasks on a weekly base to both the core group and the larger pool of volunteers.

The result is more friendships, a wider community, more financial resources and better overall assimilation into America. All this occurs by leveraging the community to enhance experiences and does so without extra funds from the government.

But the benefits to community sponsorship are not one-sided. Community sponsorship alters the politics of refugee resettlement because it directly affects thousands of individual Americans who are willing to invest their time and money. As more Americans are touched by the experience of providing a new life to a family in need, support for resettlement overall will rise, creating a new pro-refugee constituency that will be more vocal in its support for resettlement.

Across the globe — in Germany, Australia, Ireland, New Zealand, Brazil, Italy, the U.K., Argentina, Switzerland and Spain — governments are recognizing that engaging civil society more directly and positively enhances their refugee resettlement apparatus. In fact, a new organization, the Global Sponsorship of Refugees Initiative (GSRI) was launched in 2016 to help governments craft programs to tap into goodwill towards refugees.

In Canada, more than 2 million people are engaged in sponsorship. About seven million Canadians know someone involved in their private sponsorship program. In 40 years, Canada has privately resettled almost 300,000 refugees.

But in the U.S., we’re falling behind. Cash-strapped resettlement agencies are doing their best in the face of enormous financial challenges, but many do not have the resources necessary to stand up a reliable and safe program.  There is also understandable nervousness about exporting the responsibilities of resettlement professionals to volunteers.

Compounding both issues is the administration’s intent to dismantle resettlement in America, despite well-documented national security and foreign policy imperatives calling for a robust refugee resettlement program.

Community sponsorship is the type of program made for the U.S., which has a diverse population and a thriving philanthropic sector; we just need the framework to connect the donor community, refugee resettlement agencies and the federal government. We know sponsorship works, and the innovation happening at IRIS is the perfect example of resettlement entrepreneurship that we should seek to scale up.

One community at a time can improve refugees' outcomes and enhance advocacy. We can solidify support for tomorrow’s refugee program by engaging more Americans today, who can learn about refugees and who they are and be disabused of misinformation about refugees and national security. Not everyone will sponsor refugees, but the more people who hear of a friend sponsoring is powerful, for more reasons than one.

Leveraging the private sector and civil society to expand the impact of volunteers can transform a refugee family’s first year in America, putting them on track for success for years to come.

Matthew La Corte is the immigration policy analyst at the Niskanen Center. He leads the immigration department’s legislative outreach efforts, focusing on DACA, work visas and refugee resettlement. His writing has been published in many outlets, including the Wall Street Journal, USA Today, the Financial Times and many others.