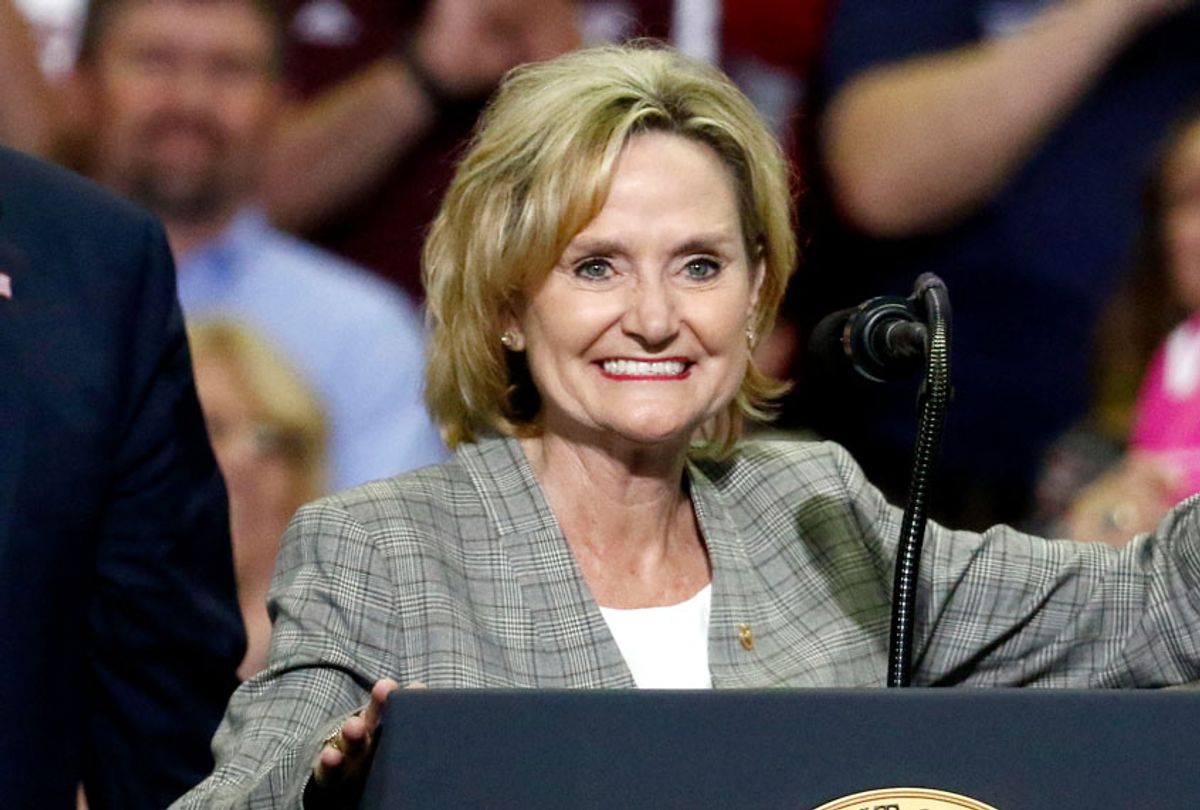 Cindy Hyde-Smith, the Republican candidate for Senate in Mississippi, has found herself in the midst of another race-based controversy as the Tuesday runoff between herself and Democratic nominee Mike Espy approaches.

"U.S. Sen. Cindy Hyde-Smith attended and graduated from a segregation academy that was set up so that white parents could avoid having to send their children to schools with black students, a yearbook reveals," wrote Ashton Pittman of the Jackson Free Press on Sunday. The report included a photograph of a young woman identified as Hyde-Smith (then simply Cindy Hyde) in her cheerleading uniform while a mascot wearing what appears to be a modified Confederate general outfit salutes and holds up a large Confederate flag.

Lawrence County Academy was set up as a so-called "segregation academy" after the Supreme Court ordered immediate desegregation of all public schools in 1969. While public school segregation was ruled unconstitutional by the Supreme Court in the landmark 1954 case Brown v. Board of Education, many states like Mississippi dragged their feet in integrating their schools and thus had to be compelled to do so by the nation's highest bench. In response to this, segregation academies were established to maintain an all-white student body. Lawrence County Academy was created for this purpose in 1970, as was another school known as Brookhaven Academy, where Hyde-Smith eventually sent her daughter, Anna-Michael.

Hyde-Smith's campaign has faced a number of controversies since she and Espy were forced into their current runoff election. Earlier this month, the Mississippi Republican aroused controversy when she said of one of her supporters, "If he invited me to a public hanging, I’d be on the front row," according to Time Magazine. After repeatedly refusing to apologize for her comment, she eventually said that "for anyone that was offended by my comments, I certainly apologize.There was no ill will, no intent whatsoever in my statements." She added, however, that "this comment was twisted and it was turned into a weapon to be used against me."

Hyde-Smith got into further trouble on Thursday when a video was tweeted of the candidate telling a small crowd that "they remind me that there’s a lot of liberal folks in those other schools who maybe we don’t want to vote. Maybe we want to make it just a little more difficult. And I think that’s a great idea," according to The Washington Post. Because there have been a number of controversies involving voter ID laws and other election practices that have disproportionately disenfranchised people of color, that comment also had the potential to be interpreted as a racist dogwhistle.

Although Hyde-Smith is considered to be the favorite in her race against Espy because Mississippi is a staunchly Republican state, her repeated gaffes and controversies have narrowed her lead in a private Republican poll to just five points, according to The New York Times.