Did Fox News prompt Trump to have refugees tear gassed at the border?

Trump created this border crisis by refusing to deal fairly with refugees. And Fox News is egging him on 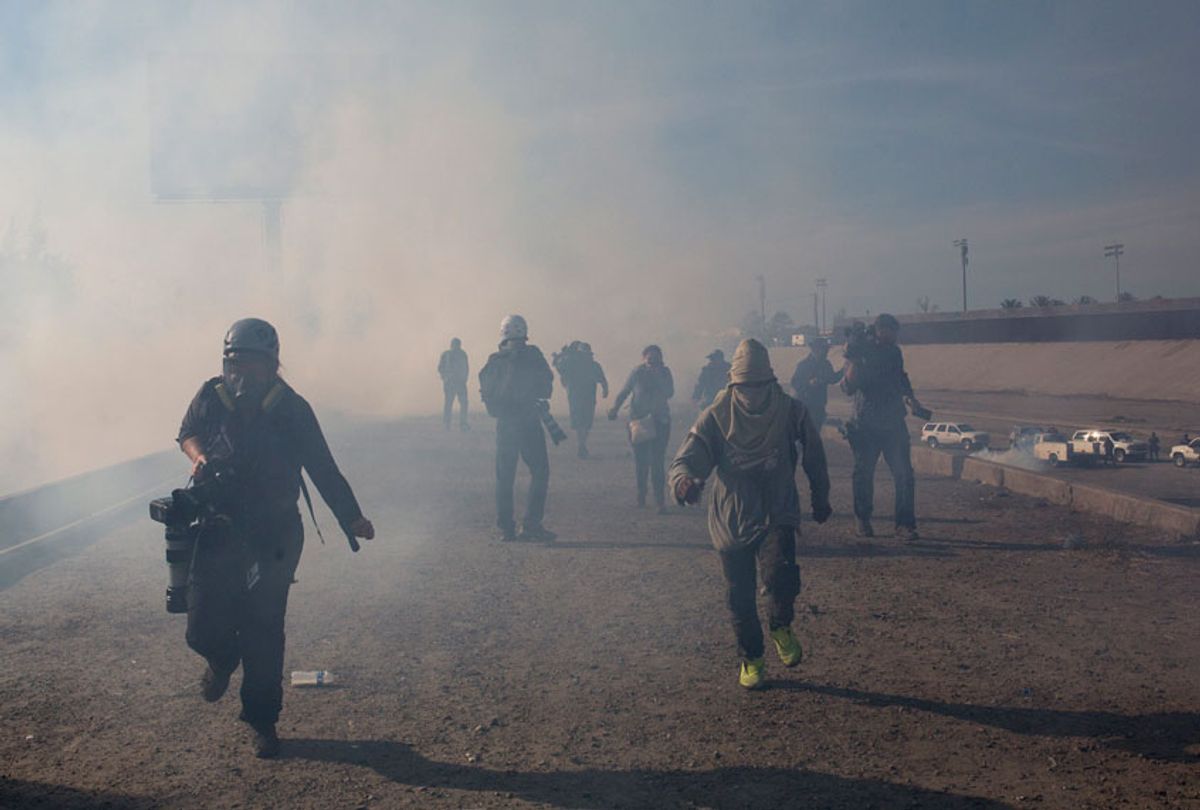 Migrants run from tear gas launched by U.S. agents after a group of migrants got past Mexican police at the Chaparral crossing in Tijuana, Mexico, Sunday, Nov. 25, 2018. (AP/Rodrigo Abd)
--

Readers born in the late '80s or after may not remember this, but during the Cold War, people in the West, and especially the United States, romanticized tales of those who escaped communism. People marveled, as they should, at the ingenuity and derring-do of people who slipped past the Berlin Wall, falsified documents to get travel papers, or even stole a train in order to get past the Iron Curtain. The refugees were admired and welcomed with open arms, valued for their courage and determination. And while public fascination for these stories has faded in the post-communist era, there are still popular guided tours in Berlin, showing the various ways people would literally tunnel under the wall to escape for East German oppression.

Obviously, the point of recounting this history is to contrast it with the current situation, where a similarly desperate group of refugees from Central America, mostly from Honduras, are trying to cross the Mexican-American border to apply for political asylum — which is their legal right, as much as Donald Trump and his fellow racist hysterics would have you believe otherwise. But instead of being celebrated, these refugees are being demonized, called an "invasion" by Fox News and by Trump himself.

And on Sunday, when a group of refugees held a demonstration to demand their right to cross the border and apply for asylum, the United States government fired tear gas over the border, scattering the people seeking safety and freedom. Images of one woman, wearing an ill-fitting "Frozen" T-shirt and running with her barefoot and diapered children who were screaming in pain, spread quickly through the press and social media, in a chilling distillation of the deep cruelty of Trump's government.

These refugees are no less determined than their forebears leaving communist oppression. The Guardian profiled several families in a recent story, including Juan Antonio who carried his 6-year-old daughter who cannot walk thousands of miles to escape after the girl was forced to watch while a powerful gang member raped his wife, a crime the police would do nothing about. María Cáceres and her son, a 15-year-old with Down syndrome, escaped after gangsters burned down her house and killed her brothers.

Talking about the horrible tear-gassing on social media means attracting a crush of white Fox News viewers, complete with the flag-festooned profiles, celebrating the torture of children and blaming the refugees themselves, as if tear gas was caused by the weather and not by government agents actively making the choice to do harm. Among the addled and hateful Fox-heads is Trump himself, using his "executive time" on Twitter to accuse the refugees of being "stone cold criminals" and encouraging Mexico, which just learned that Trump's government will literally fire chemical weapons into their country, to arrest the refugees and send them, often to their deaths, back to Central America.

Fox News needs to be singled out here. Sure, most of the mainstream media is guilty of amplifying Trump's racist delusions about the refugees, reflexively giving the story undue levels of coverage because the president spent the weeks leading up to the midterm election strategically throwing public fits over a few thousand people seeking passage into a country of 326 million people. But with Fox News, there's reason to believe the causality flows in the other direction — Trump isn't manipulating them as much as they are manipulating him, and it's quite likely that helped lead to this human rights crisis.

Without Trump's meltdowns driving the story, most media outlets largely dropped the migrant caravan story after the election. But Fox News has kept up the pressure, devoting endless amounts of coverage in the weeks after the election to convincing viewers, including Trump, that these refugees are actually a criminal invading army out to destroy us all. On Saturday night, Ann Coulter even went so far as to appear on one of Trump's favorite Fox News shows and, knowing full well Trump was likely watching, argued that the government should "go one yard into Mexico" in order to shoot at migrants, in order to evade laws forbidding soldiers to shoot civilians on U.S. soil.

Within 24 hours, Trump's government fulfilled Coulter's request, firing tear gas into Mexico. It may not have been the bullets that Coulter was clearly asking for, but this is still beyond alarming. A Fox News personality asked for Trump to cross an international border to lash out violently at the refugees, and somehow her wish was (mostly) granted.

Media Matters fellow Matthew Gertz, who often spends his mornings tracking how right wing talking points will show up in Trump's Twitter feed mere minutes after being aired on Fox News, spent Monday morning tweeting about how most of the Fox News programming was geared towards justifying the tear gassing for their viewers, the most important of whom is Trump.

Impossible to overstate how much Fox & Friends wants its audience (which includes President Trump) to be panicked about the situation at the border this morning. pic.twitter.com/Y50ZXwg6cO

Some of the more cowardly or conservative factions of the press are portraying this attack as the result of "heightened tensions," as if the tensions just expanded on their own. In reality, the influx of refugees from Central America has been going on for a while, and while Barack Obama's administration handled it poorly, they also didn't use violent retaliation to keep refugees out. This situation is the direct result of active choices the Trump administration is taking to exacerbate the situation by throwing up a bunch of unnecessary obstacles to prevent people from accessing their legal right to seek asylum. While irresponsible news outlets ran headlines accusing migrants of "storming" the border, the reality is that the very public run for the border was a deliberate political demonstration by people demanding what is — and this cannot be stated enough — their legal right.

Trump could make these "tensions" disappear in a heartbeat by opening up ports of entry and processing asylum requests in a fair and consistent manner. Instead, and at the bidding of Fox News, he has his government using bureaucratic systems and red tape to pointlessly inflict suffering. The same week that the government tear gassed refugees, it was reported that the Trump administration has been holding a record 14,000 minors in immigration detention, largely by slow-walking the process of turning the children over to relatives in the U.S. who wish to care for them.

There is absolutely no reason for this, outside of simple, ugly racism. Or to be more specific, white nationalism — a belief that the U.S. should be a "white" country and that our immigration policy should be geared towards preserving a white majority. This was the basis of Coulter's argument to Trump through TV on Saturday when she argued that a white majority is needed to preserve Republican power. And this has been the drumbeat from Fox News, especially through Laura Ingraham and Tucker Carlson, who have been serving up segment after segment framing whiteness as quintessential to American culture and equating diversity with cultural collapse.

Unfortunately, these dynamics make it near certain that the situation will continue to get worse. Fox News is hustling to reassure Trump that he is in the right, despite the public outcry, and being a malignant narcissist he will choose to believe Fox News. This border crisis is the result of our country being led by an emotional child ruled by his fears and bigotries. He will continue to be surrounded by people, including advisor Stephen Miller and chief of staff John Kelly, who share his repugnant views on immigrants. As long as these people are in power, they will continue to stoke the flames and create a crisis on the border that has no reason, outside of racism, to be happening at all.