Son and daughter of the Confederacy: Donald Trump and Cindy Hyde-Smith are a love match

Trump's intervention in the Mississippi Senate election is telling: It's now a referendum on white supremacy 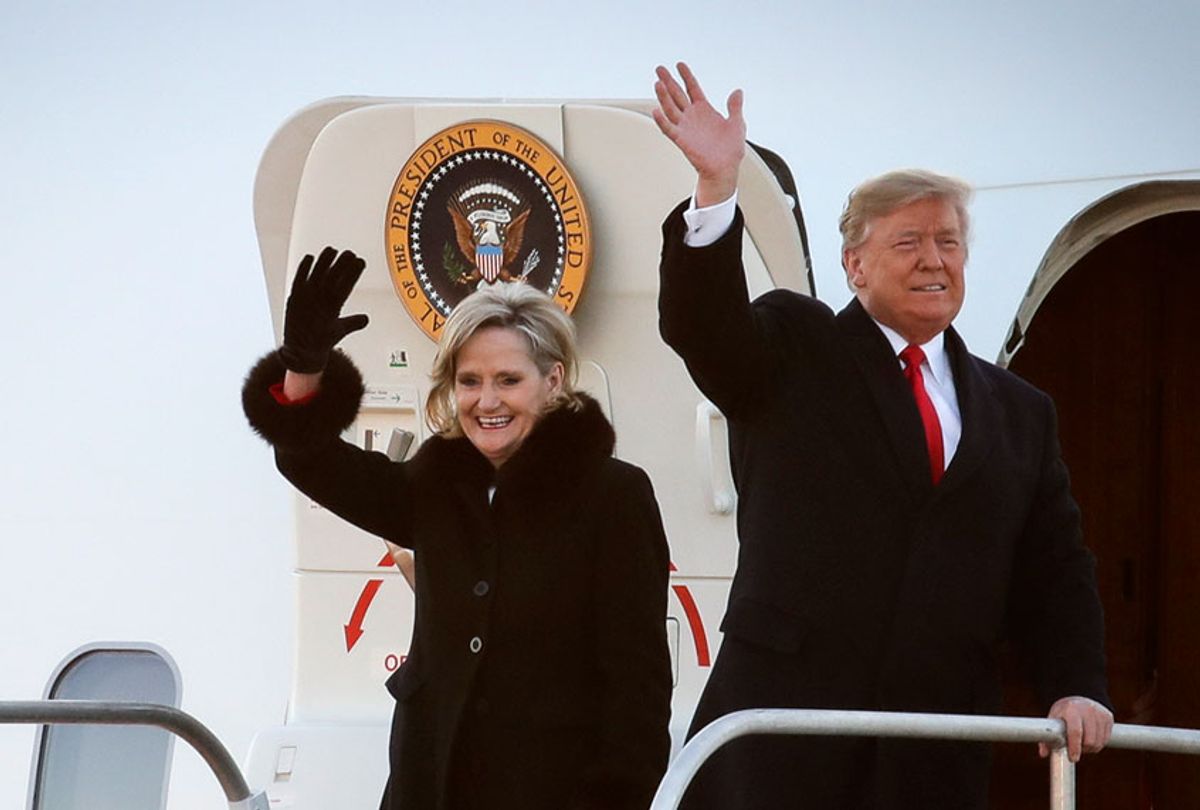 Cindy Hyde-Smith and Donald Trump wave as they exit Air Force One as they arrive for a rally at the Tupelo Regional Airport, November 26, 2018 in Tupelo, Mississippi. (Getty/Drew Angerer)
--

Donald Trump traveled to Mississippi on Monday to give support to embattled Sen. Cindy Hyde-Smith, whose repeated acts of public and private racism as well as other ignorant and bigoted blunders have imperiled her current election campaign. Hyde-Smith was appointed to the U.S. Senate last year after the resignation of Republican Sen. Thad Cochran, and now faces Democrat Mike Espy in a crucial runoff election, after neither of them cleared 50 percent of the vote on Nov. 6.

It would seem that while Trump may have been born in New York, he is actually a true son of the South and the Confederacy.

Trump infamously said that at least some of the white supremacists and neo-Nazis who rioted and rampaged in Charlottesville, Virginia, last year -- killing Heather Heyer and injuring dozens of other people -- were "very fine people."

Trump opposes efforts to remove statues from public areas across the South and elsewhere which honor the treasonous, racist and white supremacist Confederate States of America, saying that these statues and monuments are "beautiful" and part of a "great" "heritage."

Trump believes that Robert E. Lee, the general who led the Confederate Army of Northern Virginia in a war of secession against the United States was a "great general."

Donald Trump is certainly not the first president to channel the beliefs and values of the Confederacy and the associated mythology of the so-called "Lost Cause." While it's true that Democrats were once the party of slavery, Jim Crow and segregation, in recent decades these defenders have overwhelmingly been Republicans.

As a backlash against the victories of the civil rights movement, and seeing an opportunity to win the votes and support of both outright racists as well as racially resentful white voters, the Republican Party embraced what became known as the "Southern Strategy" in the late 1960s.

Ronald Reagan, like his Republican predecessors, followed through on this strategy in 1984 when he began his re-election campaign with a speech in support of "states' rights" -- the racist slogan used by defenders of Jim Crow and slavery -- at the Neshoba County Fair in Philadelphia, Mississippi. It was no coincidence that Reagan's speech was delivered (literally) near the site where civil rights freedom fighters James Chaney, Andrew Goodman and Mickey Schwerner were murdered by white racial terrorists in 1964.

During the 2016 presidential campaign, Donald Trump dispatched his eldest son, Donald Trump Jr., to the same fair where he defended the Mississippi flag and its use of the imagery of the Confederacy and slavery.

Born in Mississippi, Cindy Hyde-Smith is a true daughter of the South and the Confederacy -- and in the worst ways possible.

At a campaign speech earlier this month, Hyde-Smith "joked" that she would happily attend a public hanging.

A 2014 photo of Hyde-Smith at the home and library of Confederate president Jefferson Davis -- where she donned a Confederate uniform and held a rifle -- has also come to public attention because of its caption: "Mississippi history at its best!"

In 2007, Hyde-Smith sponsored legislation honoring a Confederate soldier as someone who defended his "homeland," rather than someone who betrayed the United States in a cause of insurrection. While a state senator, Hyde-Smith also introduced legislation to rename part of a Mississippi highway in honor of Jefferson Davis.

Predictably, the standard defenses and deflections common to "post-racial," "colorblind" America have been deployed to aid her.

She was just "joking" about the public hanging. Of course white people--especially Republicans and other conservatives -- who are held accountable for racist words and deeds are somehow presented by too many observers as the "real victims" of intolerance by "liberals" and "overly sensitive" minorities.

Such efforts to defend Hyde-Smith's comments about a "public hanging" are morally bankrupt. CNN's Koritha Mitchell explains that the senator's "remark underscored a simple truth that many Americans prefer to ignore:"

Lynching and politics are inextricably linked. Lynching literally shaped the political landscape Americans have inherited; our politics today are in part defined by the belief that white people should have the right to hold themselves and each other to incredibly low standards -- that they shouldn't have to be decent toward people who aren't white.

When white people have not actively worked to create a society fueled by fair play and equal opportunity, they have often ignored the political repression that mobs bent on extra-judicial "justice" achieved -- and the benefits, like power and economic success, they themselves have reaped as a result. Only a person whose ancestors or family members bore no risk of being lynched themselves would dismiss as "ridiculous" objections to making hanging into a public political joke in Mississippi.

Another defense is that we cannot know what is in Cindy Hyde-Smith's heart, and cannot judge her intentions. Donald Trump used almost this exact language on Monday.

This rests on the claim that to honoring white soldiers who fought for a movement to keep black people as human property, in a system where the latter could be raped, tortured, sold, worked to death and otherwise abused, is not an endorsement of evil. It is an expression of "heritage, not hate."

The same logic is used to defend Hyde-Smith's claim that the uniforms of traitors and the museum honoring them and their leader represents the "best" of Mississippi history.

Given Mississippi's and America's history of denying black Americans the right to vote, lynchings which killed at least 4,000 black men, women, boys and girls, and forced black people out of the South as internal refugees, more than 100 years of anti-black pogroms and ethnic cleansing, and political violence on a massive scale after the Civil War that killed an estimated 50,000 black Americans, Smith's statements are not gaffes or errors. They are an endorsement of a worldview where nonwhites, and African-Americans in particular, are to be treated as second-class citizens.

Donald Trump signaled to this sentiment as well. Returning to his favorite theme of "birtherism," which he first used against President Barack Obama. Trump suggested that Mike Espy, the African-American Democrat who is Hyde-Smith's opponent, is somehow an alien other -- in the language of Jim and Jane Crow, an "outside agitator."

At a rally in Tupelo on Monday Trump said about Espy: "How does he fit in with Mississippi? I mean, how does he fit in?" (For the record, Espy was born in Yazoo City, Mississippi, in 1953. So his "outsiderness" must come from something else.)

In high school she attended a "segregation academy." These schools were "legal" versions of Jim Crow, schools established by whites who did not want their children educated alongside African-Americans after the U.S. Supreme Court struck down legal segregation in the historic Brown v. Board of Education decision.

Hyde-Smith then chose to continue this family legacy of racism by sending her daughter to one of Mississippi's few remaining segregation academies. .

This is just another example of how since the 1960s the Republican Party has jettisoned its great legacy as the party of Abraham Lincoln and instead chosen to wrap itself in the Confederate Stars and Bars (which should really be viewed as an American cognate to the Nazi swastika) while kneeling in fealty to the ignoble legacy and values of the traitors. Unfortunately, there are many such examples.

The planter class of the South were plutocrats, the "one percent" of their era, and were terrified of poor white people rising up against them. These white Southern elites were especially afraid of an alliance between disempowered black and white black people that would overturn the Southern racial and class caste system.

The Southern slaveocracy was misogynistic and sexist. It enforced a worldview where white women were forever subservient to the whims and desires of white men. It used Christianity to justify its domination over and cruelty towards black people, both enslaved and free.

The Southern slaveocracy used extrajudicial violence, police brutality and vigilantism in an effort to terrorize and control black bodies. If all power does indeed flow through the barrel of a gun, then the South (and White America's) gun culture was a way to enforce a regime of racial terrorism against black people and other nonwhites.

Like its ideological forefathers in the slave-owning South and elsewhere, today's Republican Party hypocritically and at its own convenience uses the language of "states' rights" to advance its political agenda. In reality, conservatives love federal power -- that is, when it can be used to deny black and brown people, women, gays and lesbians and other groups their human rights and dignity.

Winning at any cost is all that matters. There are no deeply held and principled "conservative" values about the enduring and inviolate power of "states' rights."

Donald Trump and Cindy Hyde-Smith, are children of the Confederacy, one by birth and the other by affinity and choice. They have embraced one another to push Hyde-Smith over the finish line in Tuesday's election.

Will this be enough? Likely so. Recent polls indicate that Hyde-Smith maintains a lead over Espy, although it has shrunk.

Trump's hand-picked candidates generally won their elections during the 2018 midterms, and Trump remains very popular in Mississippi among white voters.

Polling and other research shows that there is a deep reservoir of anti-black and anti-brown bigotry and animus in the United States. White Americans -- especially conservatives and other Trump supporters -- are animated by a deep fear that they will somehow no longer be the dominant group in the country. White supremacy was America's first form of fascism. As an autocrat and demagogue, Donald Trump is uniquely situated to wield its corrupting influence and power.

And one cannot overlook the many ghosts of Mississippi; the history of the color line lives in the present. Mississippi did not ratify the 13th Amendment to the U.S. Constitution, which banned slavery, until 2013 -- 148 years after the end of the Civil War.

The immediate kin and blood relations of whites who lynched black people and engaged in other acts of racial terrorism are still alive. They will undoubtedly vote for Cindy Hyde-Smith on Tuesday. They are also enthusiastic Trump supporters.

The 2018 midterm elections were a referendum on America's character. Although Democrats won a sweeping victory, potentially gaining 40 House seats, in some ways the United States and its voters failed again. Trumpism was not repudiated across the country. Mississippi's special election for the U.S. Senate is a second referendum, not just about politics in that state but the power of Trumpism and white supremacy across the country. One way or another, backwards or forward, the people of Mississippi will lead the way.