Donald Trump's band of losers: Getting desperate as Mueller closes in

Jerome Corsi blows the whistle on Roger Stone to CNN and NBC. Meanwhile, Donald Trump starts to panic for real 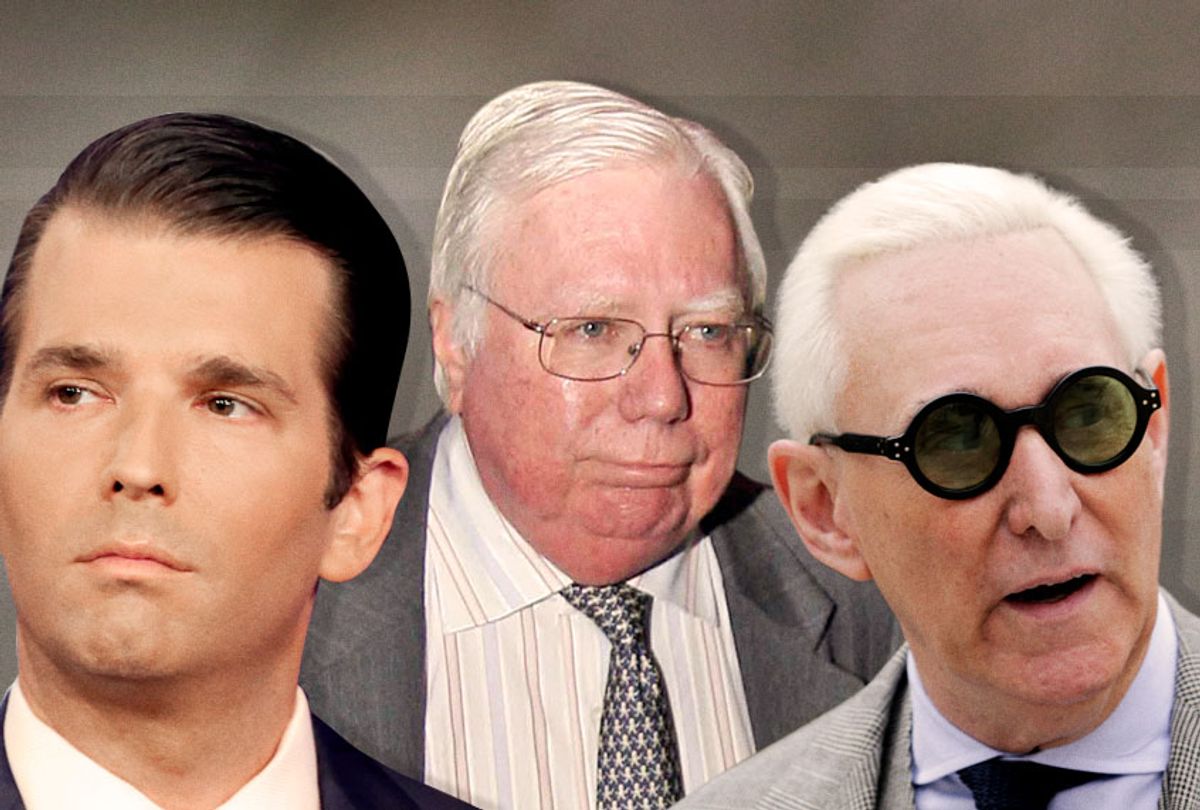 Donald Trump is a grifter and he surrounds himself with grifters. The Republican Party has long kept a stable of sleazy, criminally minded operators on hand to do the dirty work necessary to stay in power while backing policies that screw over the majority of voters. But for the most part, Republicans have tried to keep the sleaze out of the spotlight. Trump took the kind of people who folks like Mitt Romney preferred to keep under wraps and made them central figures, first in his campaign and then in his presidency.

Now, finally, it appears there may be consequences for Trump for relying so heavily on men like Paul Manafort and Roger Stone, who have no interest in making an honest living, and likely no capacity to do so. As Heather Digby Parton explained in Salon Wednesday morning, conspiracy theorist Jerome Corsi and Trump's ex-campaign manager Manafort have managed to make their already perilous circumstances with special counsel Robert Mueller even more dire. They have allegedly lied to Mueller's team, imperiled their plea agreements and leaked information to Trump and his lawyers.

In fact, Rudy Giuliani has confirmed that Manafort's team has been feeding information about the Mueller investigation to Trump's team.

Since Parton's piece came out, another, extremely important domino fell. Corsi — who has spent the past few weeks in a panic, clearly calling reporters repeatedly in an effort to spin his legal situation — looks an awful lot like he's squealing on his buddy Stone to the press.

NBC News and CNN both report that they've obtained court documents that appear to show Corsi communicating with Stone about working with WikiLeaks to publish stolen Democratic Party emails online during the 2016 campaign, in a deliberate effort to hijack the news cycle and create a fake air of scandal around Hillary Clinton. These hacked emails, as earlier reporting has demonstrated, were stolen by Russian intelligence services. These new documents suggest yet another public link between the Trump campaign and a plot by Russian spies to steal emails from the Democrats in an effort to throw the election to Trump.

NBC News is a bit cagey about its source, but CNN is clearer that these emails between Corsi and Stone come directly from Corsi. It may be difficult to understand why someone would leak a bunch of emails that make him sound like a third-rate Bond villain, but the good news is that it's probably because Corsi is desperate. He insisted to both outlets that he's innocent of conspiracy to release stolen emails, instead arguing that Stone asked him to conspire but that he didn't do it.

A betting woman would say that this is Corsi's attempt to get the heat off him by throwing Stone under the bus. If so, it's a poor attempt: The emails make them both look guilty and Mueller's office appears confident that Corsi's cries of innocence are so many lies.

There's an awful lot to unpack here. First, there's the strong odor of idiocy streaming off both Corsi and Manafort, who just keep making things worse for themselves by allegedly lying to prosecutors or, in Corsi's case, leaking like a sieve to the press. That these two, along with Stone, have made so much money and done so well for themselves is a testament to how far one can get in Republican politics without having any brains, as long as you're a white man unrestrained by morals or ethics.

The other thing this story reminds us is that, as terrible as Trump and his merry band of amoral corrupticons has been for the country, there's an upside to the fact that Trump has attracted a bunch of sleazes with no loyalty to anyone but themselves. Once things start really going south for such folks, they tend to turn on each other. Hell, Corsi appears to be turning on Stone for no discernible reason, beyond a general feeling that throwing bodies under the bus will slow it down long enough for him to escape -- an impulse that hopefully is as mistaken as it is self-serving.

It's theoretically possible that Trump himself was out of the loop during all this amateur spycrafting among his advisers that seems straight out of a Monty Python sketch. Trump himself reportedly insisted on his total ignorance in his written answers to Mueller's questions.

But frankly, I find that unlikely. Men like Corsi and Stone have always been held a bit at arm's length by other Republicans, who are eager to benefit from the dirty tricks but not eager to be seen buddying up with outright sleaze monsters. Trump, on the other hand, has been close to Roger Stone for years, and the latter had encouraged Trump to run for president as far back as the late '90s.

It seems likely that Stone, his old lobbying partner Manafort and Corsi saw Trump as their ticket out of the sidelines and back into the mainstream of Republican politics. After all, Trump was not only mainstreaming the filthy, conspiracy theory-laden side of Republican politics, he was rapidly displacing what little was left of respectable Republican politics with circus antics. It's hard to imagine that men so eager to ingratiate themselves would be anything less than eager to impress their boss and benefactor with news of their corrupt shenanigans involving stolen emails.

That Manafort and Corsi both appear to be leaking information about the investigation to Trump is just another reminder that conspiracy is second nature to these folks. Trump may act like a doddering old fool in public, but as the recordings of his discussions about paying off women to cover up affairs make clear, in private he likes to conduct himself like a high-level mafioso. No wonder Trump's starting to panic, spraying more defensive nonsense about the "Angry Mueller Gang" on Twitter. Because the people he's surrounded himself with, who are all amoral and self-serving, realize that they're no longer outrunning the law.