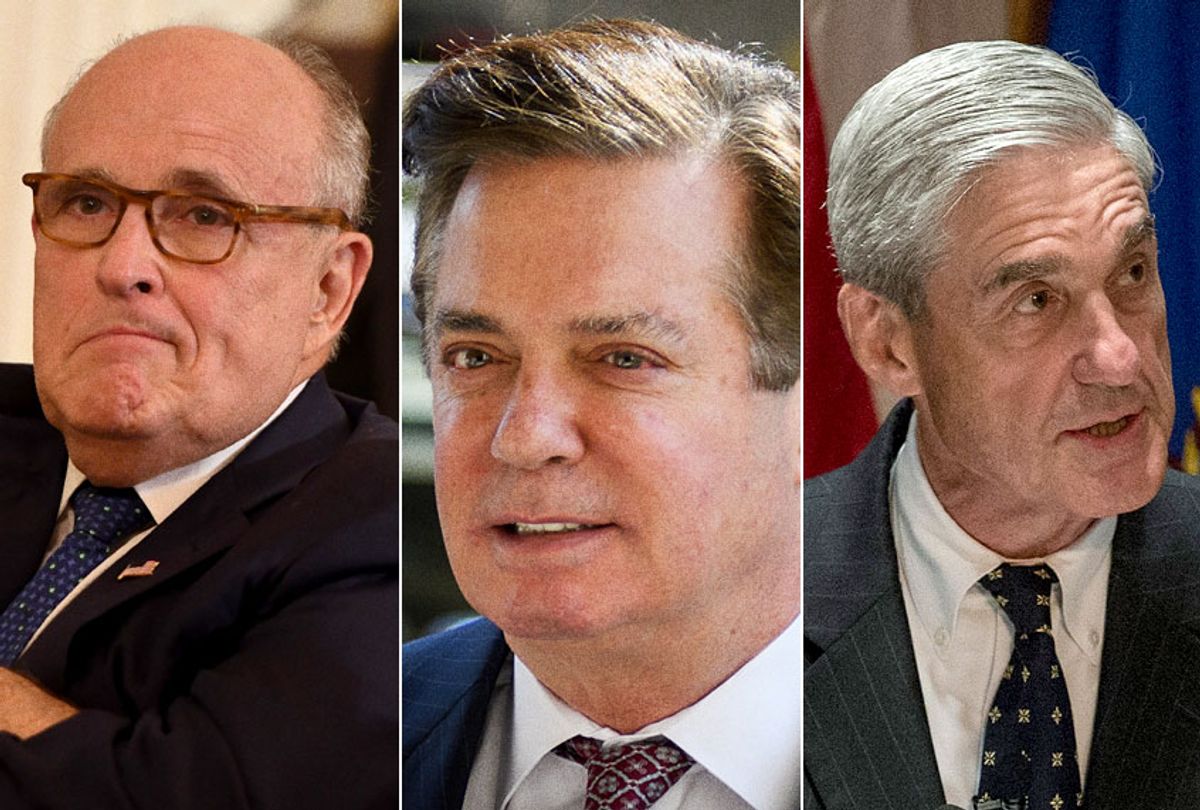 Rudolph Giuliani, one of the president's personal lawyers, confirmed to The New York Times on Tuesday that Trump's legal team was fed information about special counsel Robert Mueller's probe by Paul Manafort, the former campaign chairman to Trump, and his legal team.

Mueller's office was apparently incensed when they learned Manafort shared what he discussed with federal investigators with Trump's legal team. This may have contributed to the Mueller team's decision to revoke the plea deal that had been offered to Manafort. They have accused the political adviser of withholding information relevant to their investigation despite promising to be forthright with them as part of his agreement.

While this was helpful in part because it helped Trump's people shape their defense strategy, it also was useful because it allowed Trump's advisers to more effectively smear the Mueller probe. For instance, when they learned through Manafort's lawyer Kevin M. Downing that Mueller's team wanted Manafort to disclose more about whether the future president had been aware of a June 2016 meeting at Trump Tower with a Kremlin-connected lawyer, Trump's lawyers found out about it and used that knowledge to argue that "he wants Manafort to incriminate Trump," according to Giuliani. The former New York City mayor then used that knowledge to accuse Mueller of keeping Manafort in solitary confinement in order to give false testimony about Trump (detention officials are in fact responsible for deciding whether an inmate belongs in solitary and Manafort was put there for his own safety).

Trump also has a joint defense agreement with right-wing conspiracy theorist Jerome Corsi, according to The Daily Beast.

Rudy Giuliani, Trump’s attorney handling special counsel Robert Mueller’s investigation, said in a brief phone interview morning that the joint defense agreement that Corsi had earlier claimed existed does actually exist. Giuliani said he confirmed this with Jane Raskin, another member of the Trump legal team, adding that the agreement is a recent development. Giuliani also said he has talked about the agreement and Corsi with President Trump in recent days, and that Trump told him he “vaguely knows” Corsi, but “doesn’t remember the last time they spoke.”

There is also the possibility that Mueller's team knew Manafort was lying to them and took advantage of this to assist their own legal case.

"But Mueller’s team appears to have no doubt that Manafort was lying to them," writes journalist Marcy Wheeler. "That means they didn’t really need his testimony, at all. It also means they had no need to keep secrets — they could keep giving Manafort the impression that he was pulling a fast one over the prosecutors, all while reporting misleading information to Trump that he could use to fill out his open book test. Which increases the likelihood that Trump just submitted sworn answers to those questions full of lies."