Without Roseanne, who are "The Conners" now?

There's life after Roseanne, the ABC series shows us. But it still needs to answer for its predecessor's failings 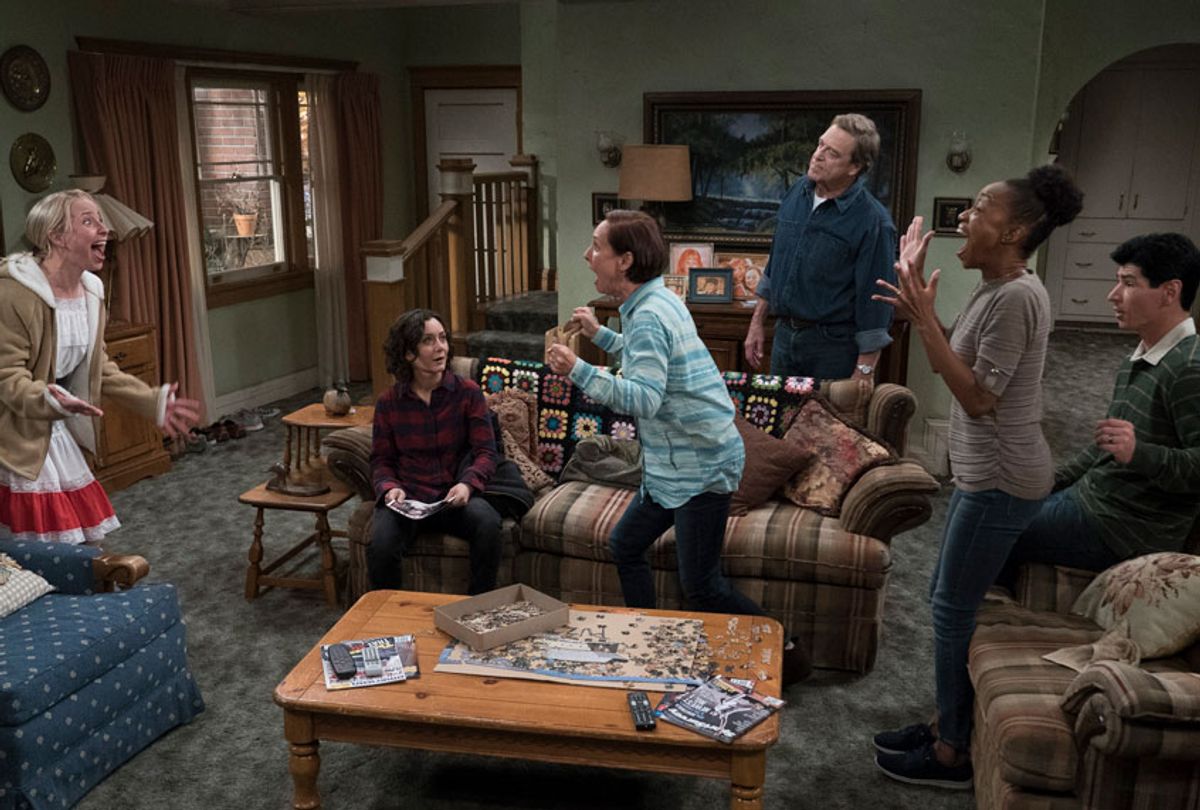 Adulthood inevitably forces many people to reckon with the sins and shortcomings of those who raised us.

“The Conners” have been doing this since its October debut on ABC, with the family gingerly but steadily moving forward in the wake of Roseanne Conner’s demise.

In the premiere we found out Roseanne died of an opioid overdose, an unexpected shock to her husband Dan (John Goodman) and daughters Darlene (Sara Gilbert) and Becky (Lecy Goranson), who believed she’d gotten sober.

Along with son DJ (Michael Fishman), Roseanne’s sister Jackie (Laurie Metcalfe), and Darlene’s children Harris (Emma Kenney) and Mark (Ames McNamara), the family spent the first half of this 10-episode season grappling with grief — Dan with more difficulty, perhaps, than the rest.

So have the writers. Make no mistake, "The Conners" is running more or less smoothly without Roseanne Barr, the radioactive star around whom ABC planned to rebuild its fortunes.  Although a number of conservative outlets paint "The Show Formerly Known as 'Roseanne'” as a failed attempt to recapture the magic without Barr, “The Conners” has settled into Nielsen's Top 20 list quite easily. Currently it's the third highest-rated comedy in the coveted 18-49 demographic behind “Young Sheldon” and “The Big Bang Theory.” It’s also the highest rated “new” comedy of this season, though it’s not actually new.

That said, until Tuesday’s episode the tone of “The Conners” approximated that of a widower a few months into mourning: it seems to be doing just fine, given the circumstances. Nevertheless, it is missing something.

Now that something is not Barr — no, not at all. If the relative success of "The Conners" in the first half of this 10-episode run tells us anything, it’s that Darlene, Becky, Dan, Jackie and the rest can be watchable, entertaining and relevant to broad audiences without their cackling mother throwing bitterness into the recipe.

They just had to become an ensemble act as opposed to the supports for an overpowering, polarizing star. This also means the writers have to weave a series with heart and poignancy as opposed to constructing a vehicle around a reckless, emotionally-shallow persona.

Reviving “Roseanne,” even with its hallowed status in the realm of TV sitcoms, was particularly tricky given the mercurial nature of its star and announced political leanings on its central figure. The original thrived on its welcoming, inclusive themes, with scenes set around the family's humble kitchen table or that sagging living room couch with the crocheted throw. Those of us who grew up with Roseanne knew her as a gruff but loving mother who wasn't too proud to confront the flaws in her nature and embrace those displayed by her family.

That melted away once Donald Trump claimed the series for the MAGA crowd after the tenth season of “Roseanne” returned to an audience of more than 18 million. In doing so, it became first ABC series to take the number one slot in the Nielsen ratings in 18 years. But after Roseanne Conner revealed herself to be a Trump supporter in the March premiere episode, and at odds with her loopy sister Jackie (a Jill Stein voter) the atmosphere surrounding the family sitcom favorite soured.

The rest of the Conners remained apolitical, but it didn’t matter. Both Roseanne Conner and Roseanne Barr’s Trumpism colored every episode that followed, making it difficult to overlook the writers’ inability to honestly, meaningfully contend with class and race issues even as they attempted to explore those topics.

In that sense, “The Conners” are proving that caustic partisanship never needed to be a part of the picture for the series to effectively depict the struggles of today’s working-class family. Dan’s construction business in blue-collar Lanford, IL, continues without us having to hear gripes about “illegals.” Darlene, until the most recent episode, grits her teeth through a job she hates on the local riverboat casino — in part to support her primary passion, writing, fed by taking on a position at a tiny local newspaper, and in part for the benefits.

Becky continues to gut it out as a waitress at the local cantina, and has recently discovered that she’s pregnant. DJ, meanwhile, trails behind as wife Geena (Maya Lynne Robinson), on leave from her tour in Afghanistan and attempting to straighten up the house in which her daughter Mary (Jayden Rey) is being raised by rudderless white people. Mary, in a change of events, actually has lines and a sprout of individuality this season. Geena is another story.

In large part, though, “The Conners”  resembles more of the American audience than the family seen in the tenth season of “Roseanne” does. Only now, the writers' primary struggle is to settle upon a new center of mass.

We know these characters as they exist in relationship to Roseanne. Even Darlene, the one many presumed would step into the space left behind by her mother’s death (in the opening credits sequence, she’s the one sitting beside Dan), was at her best as a deadpan counterweight to her mother’s lunacy.

Without that foil, Gilbert’s performance can only do so much to hold our attention. Darlene is too level, too perfectly deadpan.

Though a common theory about the “Roseanne” revival holds that the real stars are Darlene and Becky, those puzzle pieces only start snapping into place near the ending of this week's episode, “One Flew Over the Conners’ Nest,” which was written by Ali Liebegott and directed by Fred Savage.  At its climax, Becky shares her fears with Darlene about her unexpected pregnancy and, for once, Darlene doesn’t fall back to her familiar position of making cracks about her sister’s stupidity.

Here is where we also see how much of a work-in-progress “The Conners is even now, and how much labor it has to complete before the season’s end.

Only in these recent episodes has the writing for Goranson’s character begun to approximate that of Gilbert’s. Given that Gilbert is the main executive producer on the series, that's not entirely surprising. Darlene even has a new love interest now, albeit a potentially troubling one, in her new editor Ben (Jay R. Ferguson).

But it is curious and a touch frustrating to see Becky still wallowing fecklessly in the wake of her husband’s death with barely a flicker of the ambition and steam that made her so interesting in the first nine seasons “Roseanne.” It’s as if these new episodes have intentionally shoved the old Becky’s dreams into a trunk somewhere in order to mine the sallow tragedy of widowhood, producing her in middle-age as a woman mired in arrested development. Darlene, in contrast, has to keep going for her kids.

Only over the two most recent episodes have the writers emotionally melded Becky and Darlene in a meaningful way. Prior to this, the writers wrung heartbreak out of Darlene and David (Johnny Galecki) realizing their marriage has to end, and comedy out of exhausted, over-it-all Darlene confronting David’s new love Blue (played by Juliette Lewis who, between this series and “Camping,” should be on-call to salvage every stumbling comedy).

On the subject of Becky, though, it’s tough to think of a series so sharply over-correcting for its clumsy handing of social issues as this one is doing with her storyline. In the fifth episode of “The Conners,” she reveals to Jackie that her unborn child’s father is the busboy in her restaurant, an undocumented immigrant who barely speaks English and, we see via subtitles, has more ambition than the woman he accidentally impregnated. And when she tearfully blurts out the news to two of her regulars at the restaurant, a lesbian couple desperate to adopt (Liebegott plays one of the women), the feel-good denouement almost writes itself.

Until “One Flew Over the Conners’ Nest,” that is, when Becky changes her mind. Of course.

Other storytelling missteps pertaining to race and character development still dog “The Conners.” The Muslim neighbors pop up again for a moment, and that's all fine and good, but the main fail here is the inadequate introduction of Geena.

Wife to DJ and mother to Mary, Geena is present mostly to disapprovingly regard her white family. Many of her lines include a chastisement or two about their un-Christian ways, and she and DJ, her husband, exhibit zero chemistry toward one another. And the writers do display some awareness of the challenges inherent to raising a black child in a white family living in a mostly white town, but only in passing. One moment in a recent episode has Geena announcing to those assembled in the living room that they have been doing Mary’s hair incorrectly, and that could have been a terrific B-plot in itself. Instead this becomes a throwaway joke, and Geena and Mary soon exit the scene so the rest of the family’s lives can continue.

Yes, “The Conners” has some work to do. Another way to look at this, however, is that “The Conners” has places it can go. Already the series has availed itself of Goodman and Gilbert’s dramatic prowess, with Dan struggling to grieve and, in several instances, failing. A ludicrous subplot involving Jackie foisting a backyard chicken coop on the family, much to Dan’s dismay, builds toward a scene in which Goodman and Metcalf exercise the height of their abilities and establish how much these disparate personalities need one another for the long haul.

And “The Conners” have room to fill that empty space with an examination of what people of limited means do when change is forced upon them, an opportunity the new “Roseanne” episodes could have taken but didn’t.

Absent having to follow a world-view determined by a person with a particular and troubling paradigm, the “Roseanne” spin-off is now free to be a comedy that more genuinely reflects working class family life, the kind of show the TV landscape could use more of, as opposed to a show reflecting the politically convenient myth of the working class.

First it needs to definitely move past its grief and regard, with clarity, the many mistakes of its dysfunctional parent in order to avoid repeating them. It's getting there. But it hasn't arrived quite yet.