Roseanne tweets "I AIN’T DEAD, B**CHES" as "The Conners" live on. Now what?

ABC's "Roseanne" spin-off without its star, "The Conners," made an uncertain but promising debut Tuesday 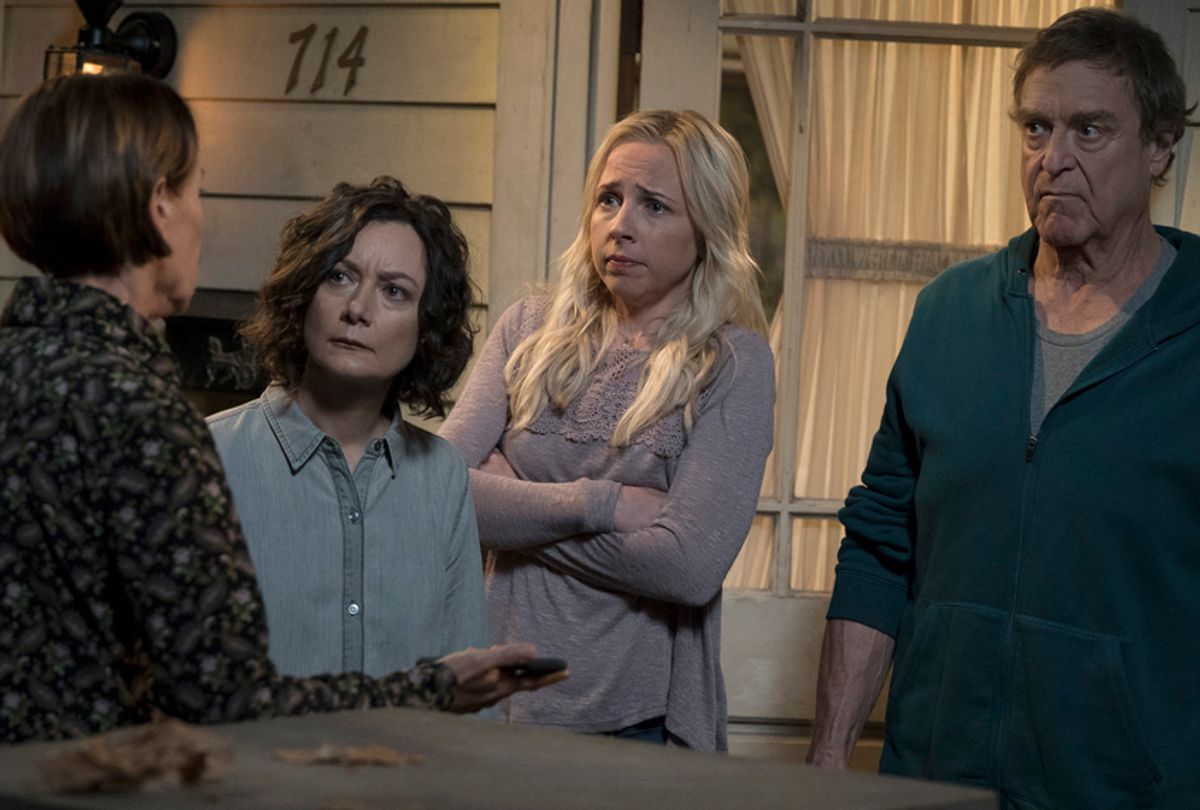 Last night, after ABC aired the premiere of its new post-Roseanne “Roseanne” spin-off, “The Conners,” the eponymous erstwhile star couldn’t resist throwing up a verbal middle finger on Twitter at the show that now goes on without her, crowing, “I AIN’T DEAD, BITCHES!!!!” But ya are, Roseanne — at least in the Lanford Universe, ya are.

“The Conners” opens on a bustling dinner scene in the familiar cluttered kitchen; Dan (John Goodman) and Becky (Lecy Goranson) and Darlene (Sara Gilbert, also an executive producer) are there, plus Darlene’s kids Harris (Emma Kenney) and Mark (Ames McNamara). Bev (the always delightful Estelle Parsons) and Jackie (Laurie Metcalfe) spar. Even Crystal (Natalie West) has dropped in for dinner. Minus one conspicuous absence, it’s all normal at the Conner house: they’re eating the last of the funeral casseroles delivered after Roseanne’s off-screen death and cracking dark jokes as if to reassure themselves, and the audience, that nothing has changed except the surgical removal of its now-toxic matriarch.

We finally meet Geena (Maya Lynne Robinson), wife of DJ (Michael Fishman) and mother of Mary (Jayden Rey), in Lanford on leave from Afghanistan. We now know three more things about Geena: She is judgmental about non-Christian religions, she has a healthy distrust of O'Hare and she appears to like DJ about as much as the audience does. Time will tell if the show will have her stick around to reveal more. Mary, for her part, gets a servicey line right off the bat before fading into the background as per usual, telling Mark that the vegetables they’ve brought home are to keep them all healthy so they don’t die of a heart attack like Granny Rose did.

Or did she? Former cop Jackie gets a call from a buddy in the coroner’s office telling her that Roseanne died of an opioid overdose, even though the entire family thought she had weaned herself off the pain medication after her knee surgery. When Becky finds a bottle of prescription pills with another woman’s name on them in her mother’s closet, the adults in the family have to reckon with Roseanne’s death in a whole different light.

Dan fixates his anger on Marcy Bellinger (Mary Steenburgen, in an utterly devastating cameo), the woman whose name is on Roseanne's pill bottle, while Jackie’s emotional unraveling culminates in a scene that showcases Metcalfe’s formidable acting power, which had always seemed a bit muted before in her scenes with Barr.

In fact, the combined dramatic powers of Goodman, Metcalfe and Steenburgen in this episode makes me wish “The Conners” didn’t have to be a traditional network sitcom anymore — not because powerful dramatic acting doesn’t belong in a sitcom, necessarily, but after the emotionally loaded premiere it will likely be used sparingly, even though a combination of dark humor and realistic grief and anger, without the routine catharsis of a joke to diffuse the tension, could make the familiar Conner home and story feel fresh and more ambitious than just another nostalgia sitcom revival. As I wrote back in June when “Roseanne” was canceled, the biggest missed opportunity of the revival was its failure to tell the complex story of how a woman like Roseanne Conner had changed so much in the 20 years since we’d seen her last:

But the process by which Roseanne Conner transformed from a socially progressive, no B.S. suffering, working-class champion of the underdog and staunch women’s rights defender to someone who would vote for Donald Trump — the living embodiment of every selfish, rich, racist and sexist blowhard who ever screwed the Conners out of work, harassed Crystal at work, pushed her kids around, or treated Jackie or one of their dear friends poorly, truly a guy who Roseanne Conner wouldn’t spit on if his ugly tie caught fire — remained, for all intents and purposes, the elephant on the afghan-covered couch.

Following the Conners as they try to get by in economically precarious Lanford while mourning a woman who was a truly complicated person, while the kids and grandkids figure out how much of her legacy they want to shoulder themselves, could be an enterprise worthy of the talent on this show. For the first episode, though, the writers seem determined to show how little the series would have to change in its new iteration. Same old Conners! Except now, thanks to Aunt Jackie's manic cleaning, with a better-smelling couch.

"Are we horrible for laughing?" Darlene asks Becky as they sort unpaid bills Roseanne left behind.

"Well, I'm tired of crying," Becky replies. "And laughing inappropriately is what Mom taught us to do."

But things must change, or "The Conners" will never find its reason for existing past Roseanne's death. The B plot revolves around Darlene's son Mark, whose gender identity was established as a "Roseanne" storyline in that show's final season, coming out as a boy who likes boys to Dan, who finds himself ill-equipped to help his grandson figure out which of his two male friends he likes. Romance stuff was Roseanne’s area, he deflects, clearly uncomfortable though obviously not surprised at his grandson’s revelation. McNamara’s preternaturally sunshiney face registers Mark’s palpable disappointment in Dan’s inability to step up and connect with him as a grandparent and father figure, but as always, Dan rebounds with humor and heart.

The question of who will take Roseanne’s place as head of the household is an ongoing one throughout the premiere. Jackie’s attempts just further contribute to the household’s chaos, and Becky is more than happy to abdicate her role as the eldest child to stick Darlene with the job. (Nobody expects anything of DJ, of course.) The new show is "The Conners," signaling an attempt, at least, at a true ensemble production. But the original "Roseanne" worked in part because of how the talented actors in the cast revolved around, with occasional break-out moments of their own, one charismatic star. All signs point to Becky being right, though: Darlene, with her passion for justice and her biting sarcasm, is the natural heir to the Roseanne we once knew. This season may show us if Gilbert is ready, or even willing, to claim that role.