Before "Roseanne" was canceled after the star's bigoted comments about Valerie Jarrett, it had already failed 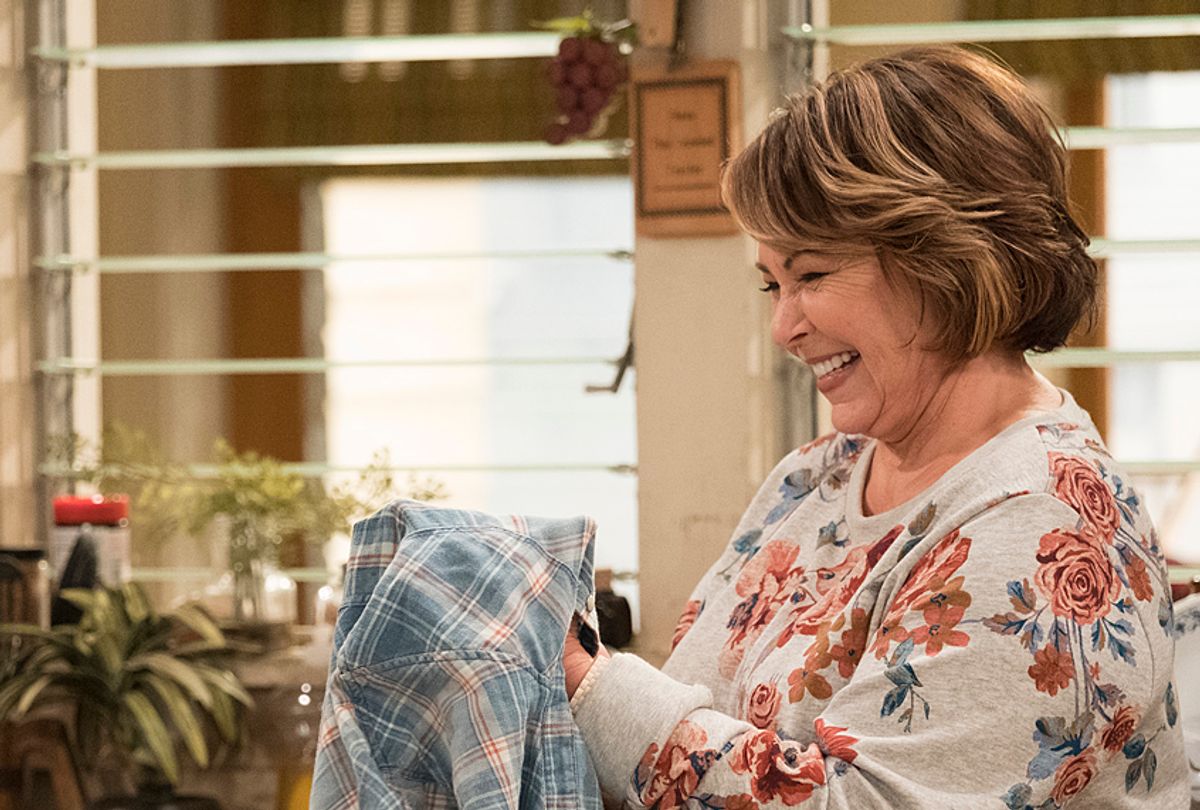 In the end, ABC’s experiment of reviving “Roseanne” — a sitcom once beloved for its portrayal of the loving and lovingly imperfect working-class Conner family during a time when such families were hard to come by on primetime — was a failure.

Unlike most failed shows, “Roseanne” didn’t fall short in the ratings, though the show’s numbers dipped after the initial curiosity wave crested and criticisms rose of how glibly the show treated its most compelling feature — Roseanne Conner's support for Donald Trump, political sympathies echoed by Roseanne Barr herself.

While it might be tempting for the show’s team to blame Barr’s inability to contain her racism behind closed doors, where the network would have preferred it remain for the duration of their renewed relationship, that didn’t cause “Roseanne” to fail, either. Yes, public outcry over Barr’s racist comments on Twitter about former Obama advisor Valerie Jarrett did prompt the network to pull the plug on the revival, which had recently been renewed while airing its first season in 20 years. But if "Roseanne" had kept going in the same direction as season 10, it would never be the culturally relevant touchstone it needed to be, and that it was back in its heyday.

The story was staring the writers right in the face all through season 10, daring them to write it: What exactly happened to Roseanne? And by extension, the many white American voters who now support values — open bigotry, misogyny, bullying and a disdain for education and science, just to name a few — that once would have at least appeared to be anathema to their own? And yet "Roseanne" was unwilling — or perhaps simply unable — to craft a believable story of how and why Roseanne Conner changed so fundamentally during her 20 year hiatus from our homes.

As I pointed out in April, the show deliberately set out to perform a sort of anthropological service to America after Donald Trump became president, based on the debunked premise that the economic anxiety of the white working class was the source of Trump’s victory:

Back in January, executive producer and co-showrunner Whitney Cummings explained in an essay for Vulture that one reason she wanted to work on the new “Roseanne” — aside from the fact that the original had been a touchstone of her childhood, like so many of us who grew up loving the snarky, loud, loving Conner clan — was that “giving my brain to a show that touched the hearts and got the eyeballs of so many working-class people is how I could finally do my part to help us all make sense of the election.”

And indeed there were many things to admire about how the new season of “Roseanne” explored contemporary economic pressures with dignity and respect, in the spirit of the original seasons, including the gig economy, our precarious health care system, boomerang kids, and the overall lack of a safety net most Americans experience now.

But the process by which Roseanne Conner transformed from a socially progressive, no B.S. suffering, working-class champion of the underdog and staunch women’s rights defender to someone who would vote for Donald Trump — the living embodiment of every selfish, rich, racist and sexist blowhard who ever screwed the Conners out of work, harassed Crystal at work, pushed her kids around, or treated Jackie or one of their dear friends poorly, truly a guy who Roseanne Conner wouldn’t spit on if his ugly tie caught fire — remained, for all intents and purposes, the elephant on the afghan-covered couch.

Cummings may have wanted her show to help us all make sense of the election, but it could have done so only if it had been willing to risk getting real and even raw about who Roseanne Conner is now. Instead, it presented Roseanne's vote as another external circumstance, like the knee surgery she couldn't afford that led to her dependence on opioids, while her character, as we were meant to understand her, remained fundamentally the same.

It’s understandable that “Roseanne” would elide the bigotry angle, given that, as writers assistant Ryan Kemp pointed out in a postmortem interview with HuffPo, the writers embraced J.D. Vance’s memoir “Hillbilly Elegy” as “one of the great books” that tells “basically what’s happened to industrial America in the Rust Belt.” While Vance isn’t the first or even the most imaginative writer to wave away the conservative strains of reactionary racism that bubbled to the surface during Barack Obama’s presidency, he did very effectively sell his shallow vision of the “white working class” to his elite peers who were all too willing to buy it.

Early in the book Vance offers a sort of get-out-of-reading-about-race-free card to his readers, hoping that they will take away from his book “how class and family affect the poor without filtering their views through a racial prism.” Later he dismisses racist conspiracy theories levied at Obama, claiming that he “strike[s] at the heart of our deepest insecurities” because the then-president “feels like an alien to many Middletonians for reasons that have nothing to do with skin color. Recall that not a single one of my high school classmates attended an Ivy League school. Barack Obama attended two of them and excelled at both.” (So did both George Bushes, Bill Clinton and Donald Trump. I wonder what's different about them?)

Viewers can see a straight line from “Hillbilly Elegy” to Roseanne’s season 10 premiere face-off with her estranged Clinton-supporting sister Jackie, in which she claims that her vote for Donald Trump was simply about his promise to bring jobs to towns like Lanford. It crops up again in Roseanne’s blithe lack of cognitive dissonance surrounding her love for her biracial granddaughter and her embrace of the man who rode racist garbage like “Barack Hussein Obama is a Muslim from Africa” all the way into the White House. Indeed, the second Mary Conner stepped into the frame, we were told by the show to accept Roseanne’s support for Trump without filtering it through a racial prism. (As my colleague Melanie McFarland writes, Roseanne’s black family members and friends “enable the writers to allow ‘Roseanne’ to have it all ways, politically speaking. Its characters can claim people of color as friends and family while explaining why they support political machinery that would take away their rights.”)

Likewise, in the episode where Roseanne dismisses the ABC sitcoms “Black-ish” and “Fresh Off the Boat” — two groundbreaking sitcoms that happen to deal deftly with issues of race and class and family to great acclaim — the show was telling us again to pack the “racial prism” away. “They’re just like us. There, now you’re all caught up,” Roseanne tells her husband Dan. And in the episode where Roseanne conquers her bigoted fear of her Muslim neighbors with record swiftness, the show told us to accept that the family next door had simply been alien to Roseanne and once she saw them instead as neighbors she was ready to defend them, while telling us to ignore the bigoted fearmongering she is still willing to tolerate from her president on a macro level. (I don’t know if the writing team read any Arlie Hochschild along with their Vance, but the concept of how the fallacy of perceived line-skipping fuels white grievance was woefully underexamined in that episode, too.)

Last month, before Barr ran her show off a cliff, several former “Roseanne” writers spoke to Buzzfeed about how little they recognize the Roseanne of season 10, including her character’s bigotry:

“I don’t recognize that character,” said one writer, who asked to remain anonymous because they still work in the industry and feared professional repercussions. “I believe the original character would’ve said, ‘Who cares [about having Muslim neighbors]?’ And now she’s saying she does care.”

Roseanne Conner would hardly be the first white woman in America to believe she doesn’t have a racist bone in her body while acting in bigoted ways, but it’s also not inconceivable that a person’s politics could change over the course of 20 years. After all, a significant number of Conners — I'm thinking specifically of those in Wisconsin, Ohio, Michigan and Pennsylvania — went from voting Democrat to pulling the lever for Trump in 2016. (The 2016 documentary “Fox News Brainwashed My Dad” could use a sequel right about now.) Scratch the surface and I wouldn't be surprised to find real families struggling to make sense of how, say, the mom who once made her kid confront his own prejudices could so readily indulge her own now and how the woman who kissed another woman in public could be fine with the federal government openly discriminating against transgender folks who want to serve in the armed forces.

So it's not that Roseanne Conner's political transformation is unimaginable. A character can change over time — actual humans do. Roseanne Barr appears to have, too. It's the storytellers' responsibility to show their work, to make us believe it. That's the great lost potential of a 2018 version of "Roseanne" — not that the show made Roseanne Conner a Trump supporter, but that they were so unambitious in showing us how and why.

The only problem with that treatment, of course, is that Roseanne couldn't have been the hero of her own show anymore. Considering the performer's public actions this week, it's hard to imagine she'd ever have signed on for that. With Barr out of the picture now and the network reportedly discussing how they might move the series or a spin-off ahead without her, there's always a chance that the Conners might grapple with Roseanne's unexamined internal journey in a more direct way going forward. But I won't hold my breath for the show to go meta in her absence and depict the remaining Conners rebuilding their family life after having written Roseanne out of it. A more likely scenario is a spin-off, the Darlene and Becky show, where they manage to push the ghost of their mom — that funhouse mirror version of the woman who raised them — into the background, without ever coming to peace with who she became.

Amanda Marcotte on how trolls took over the GOP