"Roseanne" and "Good Times": A ballad for Becky and Darlene 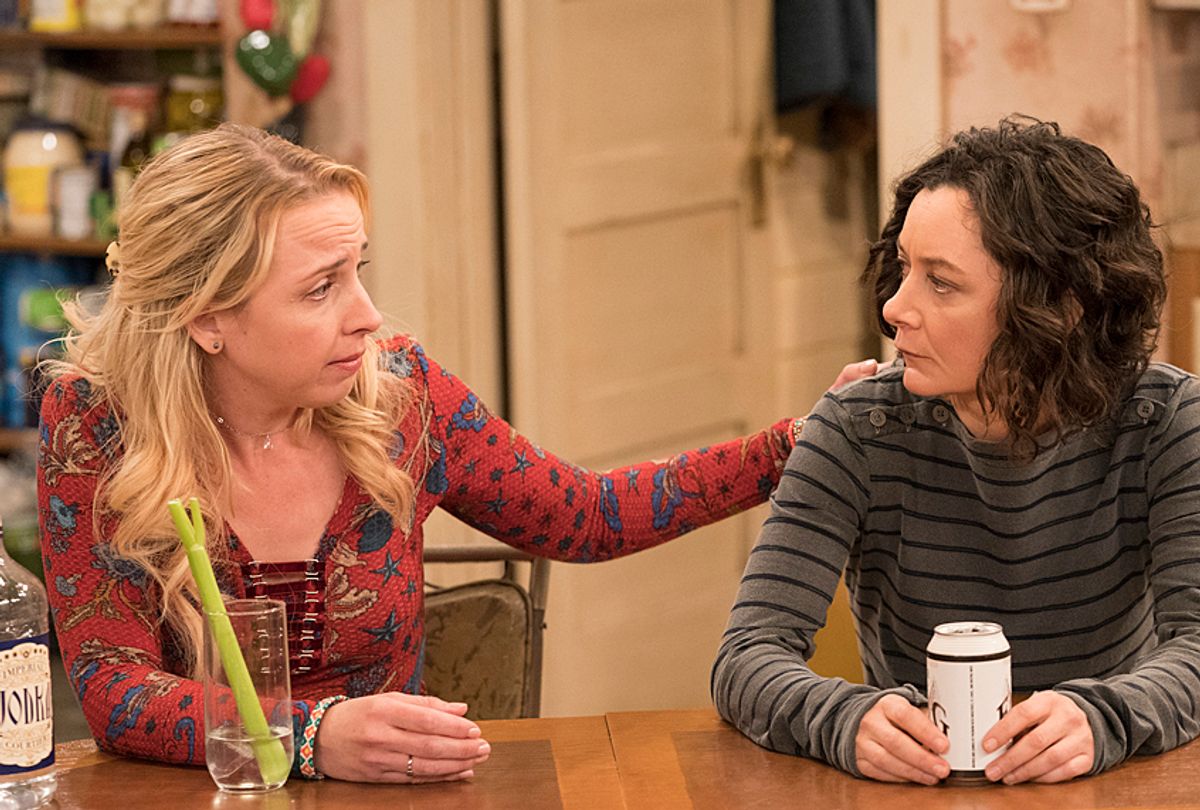 Tuesday's episode of "Roseanne," "Eggs Over, Not Easy," allowed me to think a bit differently about the series. But that was only after processing it through my memory of another classic sitcom about a working class American family, "Good Times."

They were not us, she explained, and that was that. Her declaration left me befuddled nevertheless, even more so when I matured into adulthood, moved out and finally watched a few episodes for myself.

Much later I asked her my mother why she didn't let us watch the series. I assumed she didn't want us to watch a vision created by white writers about what it was like to be poor and black. Other shows that came before "Good Times" did that poorly.

But she explained that "Good Times" had wandered away from its original mandate. She didn't just want the show to magnify struggles, she said, but also the joy, dignity and spirit of Esther Rolle's and John Amos' characters. They were parents like her, and like her parents. It galled her that producers pushed the antics of J.J., the family clown, to the forefront instead.

"What seems to be called for now is a greater relevance among characters and a closer rein on a tendency to slide toward old-time black minstrelsy," wrote Louie Robinson in a 1975 Ebony article about the series. "And what is being revealed is a healthy awareness on the part of black performers that they are responsible for cleansing the stained image of blacks so long perpetrated on stage and screen."

"Good Times" was meant to put a human face social issues and the thudding impact policy decisions have on America's poorest. But save for those who may have watched it religiously and/or recently, Walker's character may prove to be its most lasting legacy, perhaps second to Janet Jackson's role in it. "Good Times" remains legendary, and was a hit in its early seasons. But my mother wasn't alone in her opinion.

All of comedy is subjective; certainly our feelings about "Roseanne," Roseanne Conner and Roseanne Barr are influenced by how we feel about her politics and how we feel about her. But if the goal is to emphasize how wrongheaded she is, it seems strange for the writers to spend most of these opening episodes making her low-grade discontent and acrimony hilarious.

But this also accentuates why "Eggs Over, Not Easy," to intentionally co-opt a Trumpian media catchphrase, is the episode where "Roseanne" fully becomes the comedy we used to love.

I don't say this merely because Tuesday's episode focuses on Darlene (Sara Gilbert) and Becky (Lecy Goranson) instead of Roseanne, or because it finds its warmth in two similar yet contrasting visions of sisterhood or its ruminations on motherhood and fertility. (Roseanne's and Jackie's tag team comedy during a raucous caper at a pet rescue proved that the chemistry between Barr and Laurie Metcalf is alive and kicking).

Rather, "Eggs Over, Not Easy" at last achieves formulaic balance, getting past the specificity of its title character's outlook and pettiness. The script excavates the wreckage of personal tragedy, a universal experience, while remaining true to its core intent. It proved that "Roseanne" can still live up to its reputation as a great sitcom.

There's an argument that's been gaining credence that if there is truly a common concept of "us" to which "Roseanne" is speaking, that vision is realized in Darlene and Becky.

It's a reasonable position. Roseanne and Dan Conner's adult, middle-aged daughters are mired in the same financial and emotional swamp in which much of the audience is wandering or sinking. Job loss boomeranged Darlene and her children back into Roseanne and Dan's threadbare nest, while Becky's chronic underemployment is the result of clinging to a carefree and mischievous youth that's all but disappeared in her rearview mirror.

Without a doubt, the only centrist if not totally reasonable voice in a place Becky lovingly refers to as "the Mongolian cock fight that is our childhood home" are these two, women who despite their best efforts couldn't avoid being smacked around by life. In season 10 we meet them again, only now they're hanging on to the edge of the cliff by their fingernails. Just like their parents.

Unlike Roseanne and Dan — but mostly Roseanne and Jackie (Metcalf) — they're also the softest voices in the place. This mirrors our concept of how the national conversation is going, I guess, but it also deflates that optimistic argument about Darlene and Becky. Even when they're speaking from the peak of sensibility they're drowned out by the booming, stubborn, catty and oh-so-sure-she's-correct voice from on high that is Roseanne.

Gilbert is an executive producer on "Roseanne," as is Whitney Cummings, a liberal-leaning comedian. Their close involvement with the reboot's direction gives critics a sense that this skew is by design and that eventually we'll see the tables turn on Roseanne. We've seen a lot of evidence that Roseanne isn't the flawless grandma: she's impetuous and bull-headed, often relying on her weary but endlessly loving husband Dan (John Goodman) to rein her in. Eventually, the argument goes, her entrenched view of how things are and should be will come back to bite her.

Honestly, I wasn't sold on that perspective until Tuesday's episode "Eggs Over, Not Easy," when the series tied a bow on Becky's barely believable surrogacy quest.

The viewer had to know that Becky's dubious quest to dupe a rich woman into thinking she was young enough to be a surrogate was doomed from the moment medical science became a factor. That, and her misguided sense of priorities would rebound on her sooner rather than later. Thankfully the writers opted for sooner.

With the foolish get-rich-quick-scheme of surrogacy out of the way, the writers could spelunk into the human fragility driving the desperation more than the economics of it — Becky is a widow unable to shift out of neutral after losing her husband Mark (played by the late Glenn Quinn, who died of an overdose in 2002). She waited too long to have kids or move forward in life while Darlene, despite her best efforts, had the ground snatched out from under her feet. Disillusionment and regret were the themes of the day, along with the also-relatable experience of maternal meddling.

In this regard, the episode also sharpened its focus on a significant stumbling block of these new episodes, one that extends beyond a difficulty of separating the art and the artist, or Roseanne Conner from Barr.

Indeed, the very reason why it's been hard to hear or notice Becky and Darlene until now, almost halfway through this season, is due to Roseanne's revamping from wisdom-dealer to a cranky loudmouth who can't help but be out of step with everyone around her.

The premiere presented her as the voice of Trumpism and of reason. The second established her frustration at Darlene's depression and Becky's wasted potential. Moping around is not a luxury the cash-strapped Conners can afford, but they're not ready to give a potential grandchild to a stranger either.

Subsequent episodes showed Roseanne responding to her teenaged granddaughter's smart mouth by shoving the kids head in the kitchen sink and spraying her with water, earning hoots and laughter from the live studio audience.

Roseanne is the embodiment to simpler times, the good old days. Her kids may have valid points but she gets the funniest lines. She's inferred to be the voice of America, and that voice is loud enough to drown out those caught in the middle. And yes, that certainly mirrors the tenor of what's going on in the real world.

But that also means she's J.J. Evans with more sense and just as much of a talent of drawing attention away from substantive discussion. She's  Archie Bunker of "All In the Family," only here Archie is played as if he were the hero.

The counterweight to Archie Bunker is not just the other characters serving as a choir of reason and sensibility but mainstream culture itself, or our understanding of it in that time. Then we were a country falsely assuring ourselves that the civil rights movement had rendered blatant bigotry and small-mindedness Archie espouses unacceptable. He's an ugly relic of  the past still kicking around in the present. That makes him the clown, but he's also the butt of the joke.

Making such a distinction between Roseanne Conner and Barr, however, isn't so simple. Most people didn't hate Carroll O'Connor because he was completely different from Archie Bunker. Where "Roseanne" stumbles is in consciously blurring the line between actor and character.

Mind you, the series did the right thing in introducing the malevolent political tribalism that has metastasized on a national level into the family's Midwestern kitchen (albeit clumsily). The series has always embraced debates about politics and cultural issues, and the electorate's rift is certainly the top news of the day. Great sitcoms broach uncomfortable conversations by placing them in situations to which the broadest audience possible can relate. Multi-camera comedies in particular have a history of serving as laboratories where national conversations are refined to make bitter concepts palatable. The best ones achieve this by depicting the hard truth that life reminds us of our powerlessness now and then, whether through acts of nature or the will of a few men pandering to their political allies.

Where it falls down is in the scenes peppered with exclusionary humor that isn't necessary and doesn't serve the larger story. They may be blips, but a portion of the viewership notices and takes it as a wink at the nastier side of what's happening in and to our culture right now. They remind us that what lurks underneath the mask isn't kind or lovely.

Roseanne Conner speaks for a version of "us" who isn't really all of us, saying what that version of "we" has supposedly always wanted to say. She is the sensible, morally-upright America that wants to view herself as good. She treats her grandson with gender identity issues with love and understanding, and cuddles with her bi-racial granddaughter. She also voted for a political figure who is working to curtail their civil rights.

Yes, "Eggs Over, Not Easy" is still about the economy and the desperation of working folks. What makes this episode more successful and evenhanded than those that came before is that it thrust the humanity of these characters to the front of the stage. We all grieve and we all lose. We all make our best attempts to shelter those we love from making terrible mistakes, and make errors in doing so, meddling where we're not wanted and failing to intervene where and when we're most needed. "Good Times" did this quite well when we looked past the facile reaches for laughs. And for once it looks like "Roseanne" might be able to get there too.