Reminder: "Roseanne" is not the only "real" American sitcom

Despite the hoopla over the reboot, other sitcoms have been depicting how America honestly looks for years now 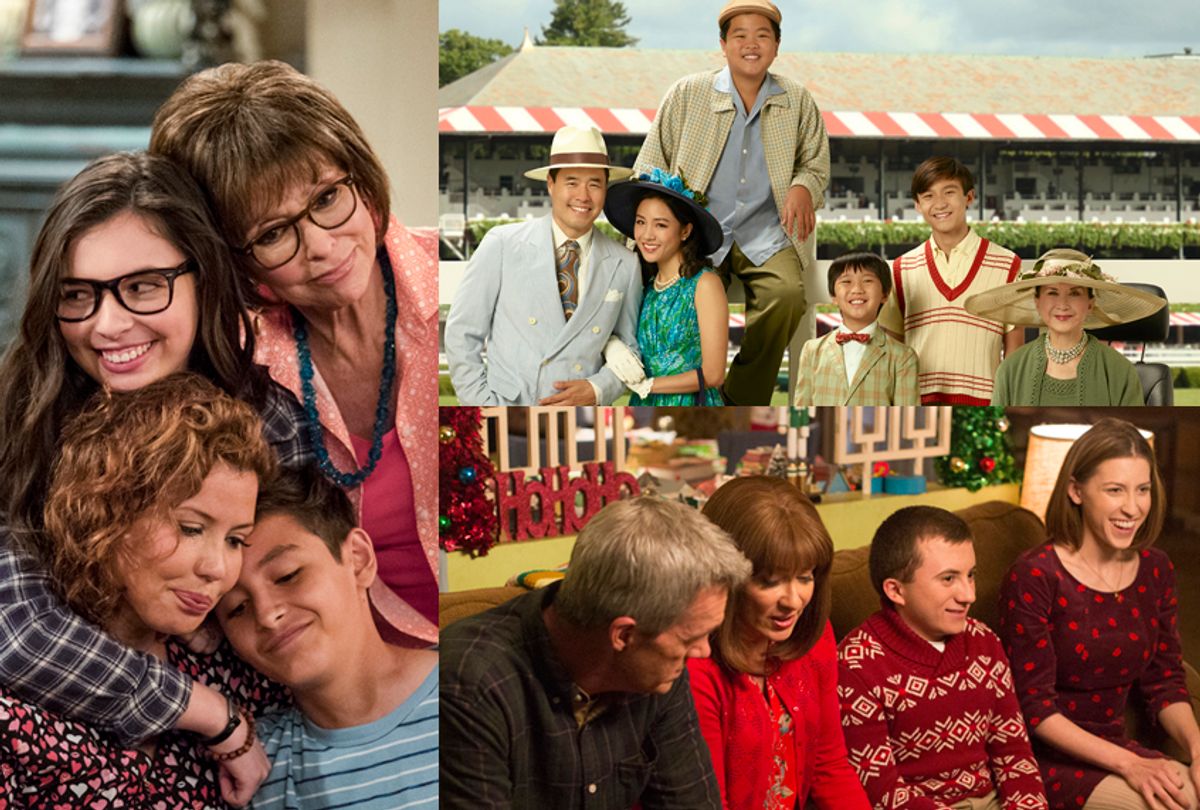 One zinger embedded in Tuesday’s episode of “Roseanne”  flew by so quickly and was delivered with enough casual ease to downplay its significance. Then again, maybe you noticed it: Dan and Roseanne Conner (John Goodman and Roseanne Barr) are seen waking up from a nap on the couch. Groggily Dan asks what time it is, and Roseanne informs him that they’ve slept from “Wheel” to “Kimmel.”

“We missed all the shows about black and Asian families,” Dan notes. In response Roseanne curtly grabs the remote, turns off the television and quips, “They’re just like us. There. Now you’re all caught up.”

The episode in question centered upon Roseanne’s fatigue with cleaning up after Darlene (Sara Gilbert) and her kids, who have moved back in after Darlene lost her job. Well that, and Roseanne’s stubborn refusal to use a stair-climbing chair Dan has installed to ease the pain of her bad knee. But that line was a none-too-subtle wink at the slice of “Roseanne” viewers riled by television’s conscious and relatively recent focus on inclusive storytelling.

ABC is home to a number of sitcoms, but only “Black-ish” and “Fresh Off the Boat” fit the description of “the shows about black and Asian families.” I suppose the episode’s writer, Sid Youngers, would respond to this critique by pointing out that at least that means the Conners are watching them.

Then again, the reductive nature of the joke goes against that excuse, especially in a season that is the product of the pilot-season that arrived on the heels of the 2016 presidential election. Then, the story went, the search was on to find new TV series that reflected the day-to-day struggles of the disgruntled white working-class viewer incorrectly credited for electing Donald Trump.

Now, a week and a half after season 10 of “Roseanne” debuted to 18 million viewers, we have Trump crowing that the show is “about us” at a recent rally in Ohio.

There are questions about who his version of “us” really is in light of numerous post-election analyses of voter demographic data. The short version is that branding Trumpism as a product of an angry white working class, which Barr continues to perpetuate in the reboots debut and in press statements, is a myth. Roxane Gay got into specifics in her widely-read breakdown on the reboot in the New York Times:

Disregarding these truths also dismisses the fact that the working class also consists of many families who aren’t white, and who may be invested in watching a few series featuring families that look like them.

Long before the resurrected “Roseanne” debuted, a number of half-hours played with the same issues of economic struggle and class division “Roseanne” knits through its narrative in ways that aren’t divisive or insulting. You may have heard of them, but might not be watching them even though they certainly deserve notice.

NBC’s “Superstore,” for example. It’s a brightly humored single-camera sitcom featuring a cast that looks like workers who would be employed at a big box store called “Cloud 9.” Only a few weeks ago “Superstore” aired an episode titled “Health Fund,” wringing humor out of the very serious reality that most workers in the U.S. have to forgo doctor visits for treatable conditions because they can’t afford the insanely priced deductible. Past arcs involved failed efforts to unionize and the crazed contortions employees have to engage in to appease management and keep jobs that don’t pay a livable wage. The situation is far from hilarious; despite that, this show manages to be.

CBS’s “Mom” attracts higher ratings, as one would expect of a show airing on a dominant network, but deserves more praise and critical attention than it receives. Its main characters (one played by recent Oscar winner Allison Janney) are recovering addicts, mother and daughter, living together and barely scraping by. Like “Roseanne,” “Mom” features contending with a headstrong daughter making questionable decisions. And it too traffics in humor that doesn’t insult or belittle the people it portrays, or anyone in their orbit.

Fifteen million viewers tuned into Tuesday’s “Roseanne” episode. Yet the creators of Netflix’s “One Day at a Time,” perhaps the most extraordinary example of a top-shelf multi-camera sitcom, had to publicly plead with its fans speak up and persuade the service to grant it a third season.  Eventually Netflix announced its renewal, prompting a great deal of celebration among critics and the show's devoted viewership, with good reason.

This reboot of Norman Lear’s late 70s classic features a Cuban American mother who is a military veteran, raising two kids on her own and taking care of her aging mother on the salary of a physician’s assistant. Health care and health issues played a prominent role in season 2, as did the crushing weight of being a single parent with limited resources. People who watch this series love it for the way that it juggles these heavyweight topics with panache and never dropping its optimism all the while.

As for the show about the Asian family, a recent “Fresh Off the Boat” explored the all-American challenge of friend break-ups and conflicts between adults couples at different stages in their lives. That family also live with an overbearing but loving grandmother. So there's that.

Somehow, though, these comedies do not adequately speak to Trump’s or Barr’s vision of “us.”

When “Roseanne” first aired its creator was aware of the need for a show that speaks to the precarious  financial state most of American lives in.

“I honestly think ‘Roseanne’ is even more ahead of its time today, when Americans are, to use a technical term from classical economics, screwed,” Barr observed in a first-person piece she wrote that ran in a 2011 issue of New York magazine.

We had our fun; it was a sitcom. But it also wasn’t ‘The Brady Bunch’; the kids were wiseasses, and so were the parents. I and the mostly great writers in charge of crafting the show ­every week never forgot that we needed to make people laugh, but the struggle to survive, and to break taboos, was equally important. And that was my goal from the beginning.

Putting this statement in the context of the era in which it was written, in 2011 ABC’s sitcom pool consisted of Tim Allen’s “Last Man Standing,” a forgettable misfire known as “Man Up!,” and a two-episodes-and-done horror titled titled “Work It!,” a horrific attempt to recapture the magic of “Bosom Buddies.”  ABC also had “The Middle” back then, as well as critical darlings “Suburgatory” and “Happy Endings” and “Don’t Trust the B--- in Apartment 23,” but its best performer then and up until “Roseanne” returned was “Modern Family.”

If you know anything about these sitcoms you may notice a theme. Most featured main characters who were either young or affluent or single or childless or some combination of these. “Modern Family” represented ABC’s standard in terms of diversity. Even the “Last Man Standing” family lived in a nice home.

Barr was right. With the exception of “The Middle,” families struggling to make ends meet didn’t see much of themselves on broadcast television. And it wasn’t just ABC ignoring economically-strapped families in prime time. Across the board broadcast networks pumped up white-collar humor, drawing the laughs from workplace dynamics or the comedy of living single in a fabulous apartment in the big city.

Somewhere between then and now, the portrait of an ABC sitcom shifted. “Modern Family” remained ABC’s greatest success, and a popular sitcom during seasons where other networks who weren’t CBS struggled to get noticed. But it also welcomed in “Black-ish” and “Fresh Off the Boat,” as well as “Speechless” and “The Goldbergs.”

Last season’s ABC sitcom success “American Housewife” owes a huge debt to “Roseanne”; the locus of its humor is in the main character’s unwillingness to assimilate to the norms of the upper-class white enclave of Westport, Connecticut where her family  — also white, but not as rich or stuck-up — exists on the lowest social rung.

Still: that family can afford to live in on the richest suburbs in the United States. All of its other families can, in fact. The notion that everybody in “Modern Family” lives in gigantic houses and can afford opulent vacations and ridiculous birthday bashes is a running joke among viewers.

During that same time period, between 2011 and today, Barr’s politics made a stark shift that barks, not merely dog-whistles, at the long-simmering racial resentment boiling over in 2018. Her network and culture analysts would like to remind us to separate the art from the artist, but that tossed-off punchline in an episode that’s decidedly not about politics — anyone’s politics — makes that tough to do.

Within that snippet of dialogue also lurks the meat of the TV industry’s low-key ruminations about the class divide. Conversations about what the success of “Roseanne” tells us about what the audience wants imply that portraying diversity is slowly but surely becoming a minus instead of a bonus.

And yet, no other series on TV poignantly does what “Black-ish” recently achieved in its Easter-themed episode “North Star,” which captured the veneer of politeness and discomfort that pulls up to the table even in mixed-race families who tolerate one another as opposed to embracing each other. What began as an episode poking at the merits of black holiday food versus white special occasion cuisine became a meditation on how family holiday meals connect us to our unique family histories as well as our cultural identity.

The “Roseanne” swipe, you see, is not simply a glancing blow. Barris and the writers on “Black-ish” have spent the entirety of the show’s run writing to entertain the broadest audience. And they’ve done this while speaking to concerns and anxieties Black Americans are experiencing right now, and in a way that invites white viewers into the conversation.

As an aside, a recent Hollywood Reporter article stated that “Black-ish” creator Kenya Barris may be in conversations about jumping ship to Netflix. ABC already has lost Shonda Rhimes to the streaming service.

Watching his current network’s new hit refer to his work as the butt of a joke probably won’t make Barris more amenable to sticking around. But ABC needs his view, and the views of others.

“The Middle,” a creation of former “Roseanne” writers Eileen Heisler and DeAnn Heline, is in the midst of its ninth and final season and enjoying a “Roseanne” bump right now – as is “Black-ish,” which currently airs later on Tuesdays. “Black-ish” is widely expected to be renewed for another season, and ABC picked up an 11th season of “Roseanne” soon after its monstrous debut.

It’s still early days yet, but perhaps its success will provide the tentpole ABC’s comedy line-up needs to bring attention to a multitude voices. But its not unreasonable to be concerned that one show’s honking cackle could wash the variety of storytelling out of the broadcast schedule, as networks chase a single skewed view of what America looks like, and how it wants to be portrayed.