"Roseanne" returns with a vision of grudging tolerance

The Conners used to represent all of us. Now the show wants us to see the world as its star would like it to be 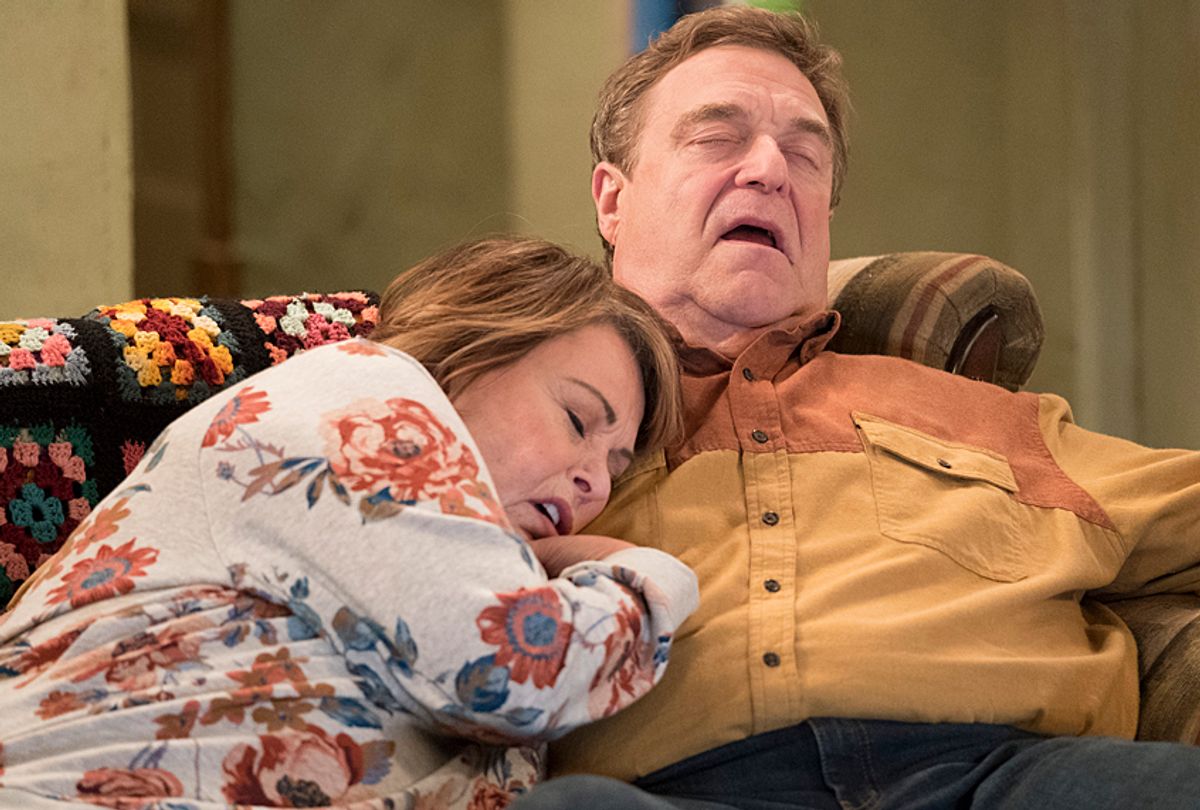 Reviving “Roseanne,” the highest-rated show on television from 1989 to 1990, makes sense from a business perspective. Bringing the series back some 21 years after it went off the air (and nearly 30 years after its debut) also feels somewhat baffling.

For the most part, it’s easy to see why ABC is resurrecting one of the greatest half-hour series in its history, debuting its first new episode in more than two decades on Tuesday at 8 p.m. Our world quivers with anxiety. Our constantly expanding field of entertainment options is a floodplain. In an environment swollen with plenty, gravitating to familiar brands and faces for comfort is simpler than trawling for new diversions, and classic “Roseanne” episodes are the sitcom equivalent of cozy quilts.

There’s a reason the original episodes of “Roseanne” stand as examples of some of the finest TV of all time, drawing comparisons to the warm and groundbreaking inclusivity of Norman Lear. Then and now Dan and Roseanne Conner (John Goodman and Roseanne Barr) are stand-ins for struggling working-class families left behind by the Wall Street surge of Reagan era or the go-go ‘90s.

Today’s Conners are still a loving couple, still unapologetically plump (though less so that when the series first aired), and more than a little cranky about having to cede their empty nest to Darlene (Sara Gilbert) and her kids Harris (Emma Kenney) and Mark (Ames McNamara).

Becky’s back too, naturally — both of them. Lecy Goranson, the original Becky, struggles to get by on a waitress’s salary. D.J. (Michael Fishman) served a term in the military and Jerry Garcia Conner, an infant in the original episodes, is conveniently away on a fishing boat.

Sarah Chalke, who played Becky in the series’ later years, returns in a different role that slyly connects her character with Goranson’s Becky in a way that nods at the memory of being her double, while tossing in a plot conflict that demonstrates how our differing views on social issues have become regular, frequently bitter-tasting side dishes at American dinner tables.

Yet the sight of that famous kitchen in Lanford, Illinois, teases forth a pleasing nostalgic sensation, a reminder that this brood, actually, is us.

The renovation trend that swept America since the last time we saw the Conners, an obvious sign of prosperity, passed them right on by just as it did many of the nation’s families.  Want to drink in the sight of fancy furnishings and appliances? Tune in to "Black-ish" and "Modern Family." Meanwhile on "Roseanne," that crocheted throw still sits in the same place on the back of the worn-in couch they haven't replaced. It ain't broke, but this family still is.

Seeing the Conners stand with us and for us in this new territory could be a refreshing diversion. Especially if you can find your way around the fact that its stars one of the least likable people in America.

Mind you, the fact that Barr spent many of two decades between the first finale of “Roseanne” and its revival convincing Americans of all political stripes that she’s either psychologically disturbed or simply odious for the sake of being odious does not preclude us from enjoying this revival. But its clunky politics just might.

Barr is a vocal Trump supporter — much more so than Roseanne Conner, who voted for him for the very simple reason that he promised to bring better jobs to America (It’s never said who Dan voted for; anyway, we’re all just happy he’s alive after all). And her Trumpian view of how America should be permeates the entirety of these new episodes, starting with a premiere focused on how our political rancor has split the Conner household: predictably Jackie (Laurie Metcalf) is pulling for the other team with vexing gusto, still sporting her pink knit hat well into springtime.

Even if you skip the premiere, however, the show takes a while to get past its politically-skewed power dynamic. Roseanne doesn’t pretend to be perfect — this new season highlights her frailty in a surprising way, in fact — but the character’s common-sense paradigm is uncomfortably informed by a blissful willingness to overlook things as opposed to accept them. The most noticeable example of this is D.J.’s black daughter Mary (Jayden Rey), who barely receives any dialogue in the opening episodes and appears mostly to be an accessory, a reminder that Roseanne Conner may have voted for a racist but she sure isn’t one.

And this dissonance twangs through “Roseanne” in more apparent ways, too. Jackie is a clownish representation of lefty liberalism (at this point, Metcalf deserves better, and I hope Barr thanked her for the favor of reprising her character) but she has no equivalent from the other side of the wingnut spectrum to counter her overbearing, know-it-all personality in the preview episodes sent to critics.

These are a few of the ways showrunners Bruce Helford and Whitney Cummings, along with Barr, clumsily attempt to channel the vitality and frankness of past episodes in this new season. To be fair, other top-of-mind social concerns are handled with more nuance than the script’s willful leap over our simmering racial conflicts. The new “Roseanne” is at its best when the story explores the contortions and compromises Americans have to go through in order to secure decent health care or economic stability. An evolving arc that acknowledges our rampant opioid epidemic is treated thoughtfully and with compassion.

When these storylines take the front seat in the third episode, the show starts to recapture its old appeal. They also feel less forced than a subplot involving Dan and Roseanne wrestling with the identity issues as they pertain to their grandson and daughter. Even here, the writers ably reflect the internal struggles of previous generations rooted in one perspective attempting to make heads or tails of evolving views on the morality of personal choice and commonly accepted definitions of gender.

Roseanne eventually opts to let her grandmotherly side rule — no spoiler there, that’s what the show does best. When she clasps her kids and grandkids in a hug, kissing them with the strength of a mother bear, we’re reminded of why we this show used to hit us in the heart week after week. Getting there takes a while, though, and requires staring into a refracted image of what we’ve become.

A fair share of the audience will love that about “Roseanne,” embracing it with the same affection that buoyed such ABC hits as “The Middle” and “Last Man Standing” for many seasons. But if you not so sure that America or Roseanne Barr are great, spending time with the Conners probably defeats the purpose of turning off the day’s anxieties.