Roseanne Barr: From comic icon to truther and troll

In her latest bizarre statement, the actress accuses the president of "false flag terror attacks" 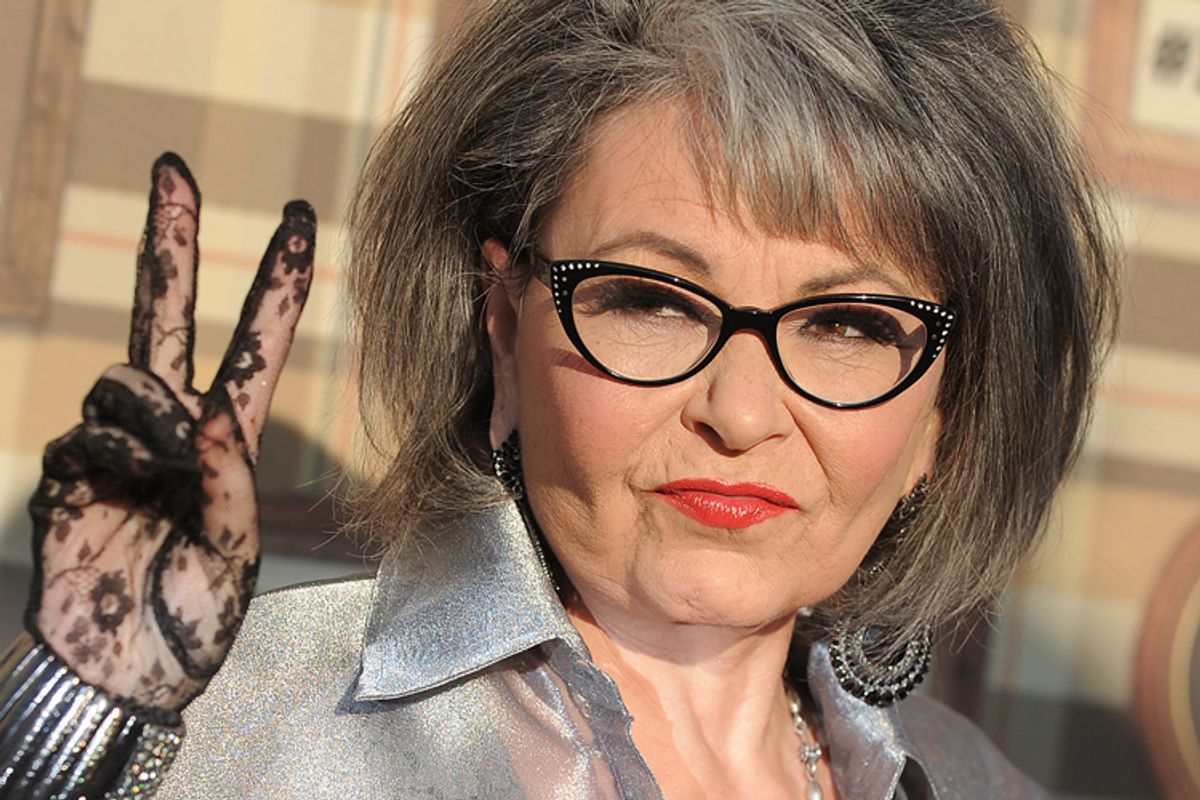 What's the appropriate response when a groundbreaking, award-winning, often brilliant individual who also, by her own admission, has "several" mental illnesses goes off the rails? Because we need some kind of game plan here for looking at Roseanne Barr.

In her latest perplexing move, Barr, whose history of erratic behavior is as long as her career itself,  has written an open letter to Congress "regarding blackmail from the Executive Branch." The subject alone is a tip-off to the dubious content within -- as writer Jesse Berney noted on Twitter Tuesday, "If Obama is blackmailing Congress, he is the worst blackmailer of all time." But the self-described "Peace and Freedom Party" candidate confidently states that the president has made "direct attacks against the 1st, 2nd, 4th, and 5th amendments to the Constitution," including "false flag terror attacks to remove the 2nd amendment (Boston Marathon; case in point)." She goes on to cite the "Nazi origins" of "ObamaCare" and to muse, "Some of you in the congress live alternative lifestyles. Some of you cheat on your spouses. Why should the camera only be pointed on you?- it’s time the camera was pointed on Obama." The letter includes 41 pages of footnotes "detailing the blackmail of congress." They feature SPECIAL REPORTS of lurid "lesbian sexual trysts," "underage male prostitutes" and "Obama’s gay trysts." On the Daily Banter, Chez Pazienza notes, "Almost all of them [are] sourced to batshit crazy Internet conspiracy theorist Wayne Madsen."

Roseanne saying and doing strange things is not new. In her prime-time "Roseanne" heyday, she was famed for her dramatic off-camera behavior. In 1991, she claimed to have recalled repressed memories of being the victim of incestuous abuse – and then 20 years later said, "I was prescribed numerous psychiatric drugs. Incredible mixtures of psychiatric drugs to deal with the fact that I had, and still in some ways, have and always will have some mental illness. And the drugs and the combination of drugs that I was given, which were some strong, strong drugs, I totally lost touch with reality in a big, big way…. I was mistaken to use the word incest." She's said in the past that she "didn't have manic depression or schizophrenia but I'm working on it" and in 2011 joked, "I have [bipolar disorder], as well as several other mental illnesses, but then, I’ve always been a trendsetter."

More recently, anyone who's paid attention to Roseanne's Twitter feed knows she's lately all but traded in her credibility as a beloved creative talent and television icon for a chance to be a full-time train wreck. She spent her summer trolling Jezebel's Lindy West for her shouldn't-be-controversial suggestion that rape jokes aren't always such a hot idea. In an Esquire interview this spring, she suggested that the United States government was using mind control techniques on Hollywood celebrities, saying, "There's definitely a control of the artist."

As Pazienza says, "There’s still something fascinating about watching a person who was once a huge celebrity, beloved by millions, basically go off the deep end and descend publicly into utter madness." Yet Barr's public implosion is different and even sadder than the typical Ted Nugent-esque has-been grasping for attention tantrum. Roseanne is someone who's left a profound and indelible mark on the entertainment business, and on generations of women in it. Watching her now devolve so profoundly, seemingly unable or unwilling to address the mental issues she's acknowledged in the past, is nothing short of tragic. It's the sight of a woman who's achieved so much in her life, who has been so fiercely unique, reduced now to just another one of the millions of paranoid conspiracy theorists on the Internet.