There's something about Mary: "Roseanne" and the almost invisible girl

In an exclusive first-person column, Mary Conner questions the nature of her existence on ABC's hit reboot 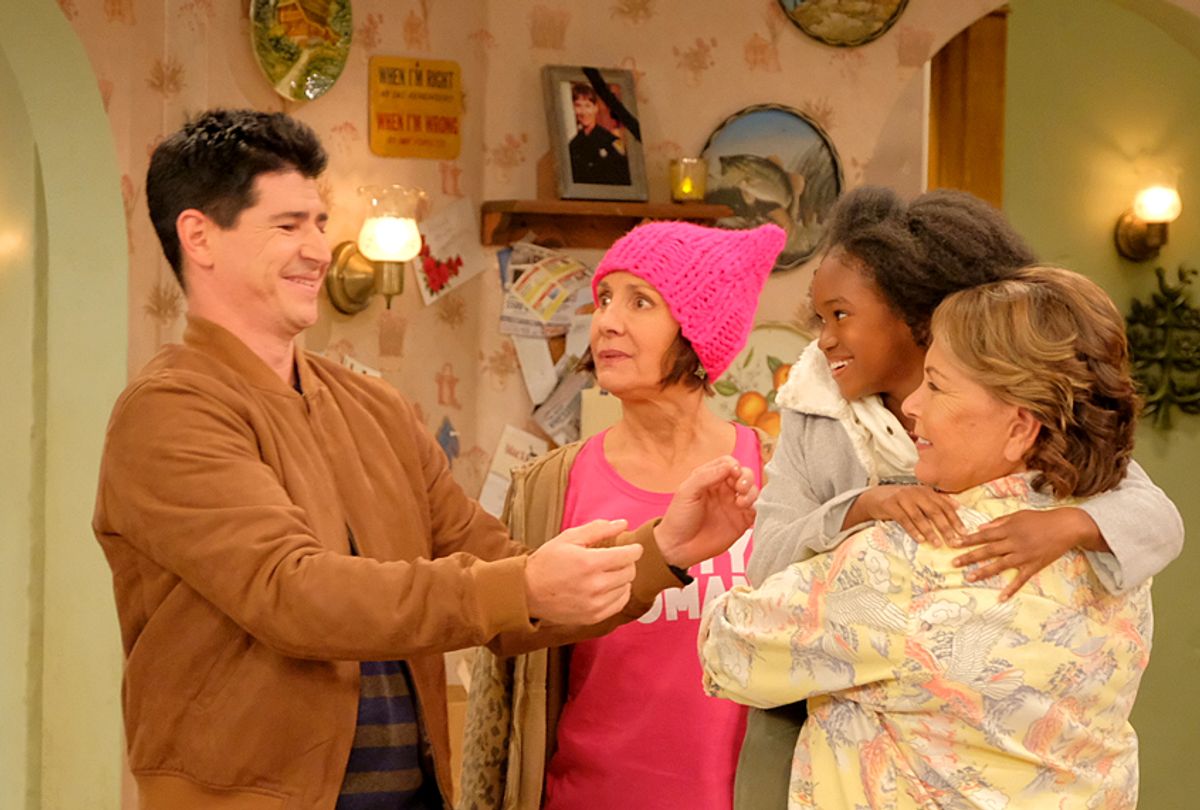 “Sometimes, I feel discriminated against, but it does not make me angry. It merely astonishes me. How can any deny themselves the pleasure of my company? It’s beyond me.” — Zora Neale Hurston

Greetings, real America. Mary Conner here. I am nearly identical in appearance to a child actor named Jayden Rey.You may know me as one of Roseanne Conner’s grandchildren and the daughter of D.J. Conner on the ABC’s hit reboot of “Roseanne.”

Then again, is “know” the right word to use here? How can you know me? People gain knowledge of others through their words, somewhat, but truly through their actions. And five episodes into this nine-episode first season of the show named after my Granny Rose, I have said very little and done even less.

My appearance on Tuesday’s episode represents the second instance that I’ve received any dialogue or significant screen time this season. Granny Rose and I, along with Aunt Darlene and my cousin Harris, are in the checkout queue at the grocery store and I get to deliver my third and fourth line from my seat in the cart. You ready?

I also received a pair of lines in the premiere: “Granny Rose!” and “I want to train cats to bark.” That second one got a good laugh because it was a response to weird old Aunt Jackie, probably all hopped up on matcha, telling me that I could also be a senator, or a doctor, a captain of industry, because girls can be anything they want to be. By telling her that “I want to train cats to bark,” I sound like a silly little kid they can just dismiss. Which they do! Soon after I’m sitting at the table, my gaze wandering as the adults blather about politics.

There’s an old saying that children should be seen and not heard. But in Granny Rose and Grandpa Dan’s house, that isn’t true. Except as it pertains to me.

Surly cousin Harris gets to complain loudly, scream that she hates everybody and generally be a pain in the bottom. We know a lot about my cousin — she hates that aunt Darlene moved her and her brother Mark from the big city of Chicago to blue-collar Lanford, IL. She’s also upset that uncle David abandoned them and only shows up when he pleases.

My other cousin Mark is exploring his identity as it relates to gender. This tests the mettle of Grandpa Dan, who takes pride in being a loving, responsible and caring male figure. Seeing his grandson wear skirts and nail polish stretches his patience and understanding of masculinity past previously unacknowledged boundaries. Both Harris and Mark have had episode subplots devoted to telling their story and establishing their individual traits.

As for me? I don’t like it when people lick my food. Neither do I balk at playing the accomplice to my grandmother’s shoplifting. Beyond that, to quote Ralph Ellison, I remember that I'm invisible and walk softly so as not awake the sleeping ones.

Sometimes it is best not to awaken them, Ellison says. There are few things in the world as dangerous as sleepwalkers.

That’s right, I’m a voracious reader with comprehension skills at a level far above those of my peers.

Have you been presented with evidence to the contrary? No, you have not.

And to those who scoff at the notion of an eight-year-old quoting “The Invisible Man,” allow me to point out that you have no qualms buying that a nine-year-old white kid living in rural Texas is a genius and the smartest kid at his local high school.

My personality, my thoughts, my likes and dislikes, they’re all a mystery. Fact. That’s kind of weird, right? In case you’re pretending not to notice, I’m the only person of color at the Conner dinner table. Though I have a white dad, my dark complexion announces my blackness.

And while that in itself doesn’t merit a Very Special Episode, I am of an age now where I know people wonder at my identity.

Seriously, my story doesn’t just have holes — it’s a gigantic blank. All we know about my dad is that he was in the army, that he served in Syria and that he’s only been home for a few months. My mother, Geena,  is still stationed overseas.

Where was I that entire time?  Who took care of me? I haven’t said, and neither has anyone else.

The woman who plays my Granny Rose, Roseanne Barr, believe that my presence is enough to tell you everything we need to know about my relationship to my family. Barr specifically wanted me to be a part of Granny Rose and Grandpa Dan’s life, which is a nice thought. She told The Hollywood Reporter, “I like diversity, and it's so much a part of the working class where it is not so much part of middle-class stuff. And I know so many people who have mixed families.”

In that same article Whitney Cummings, an executive producer on “Roseanne,” informs us that this season will not at all be about me being black. "It's not like, ‘Here's a black story about the black kid,’" she said. Barr adds that she intends to examine what being a mixed-race family means to the Conners next season.

I suppose that's something to look forward to.

But you know, I also speak. I have opinions and feelings. Why not give some indication, in these nine episodes, that I am more than just one of my grandmother’s beloved knickknacks? By now people know Harris is a sullen vandal who lashes out. Mark is an artistic boy who wears girl’s clothes because he enjoys the colors and the sparkle.

If “Roseanne” can do a story about the challenges Mark faces at school due to his gender fluidity, surely there’s material to be explored about what it’s like to be a black girl in a Midwestern town where only a couple of decades ago, according to my granddad, black people comprised only five percent of the population.

Barr says Lanford is based on Elgin, Illinois, which has a sizable Hispanic population today, a detail reflected in the high number of black and brown faces in Mark’s classroom. Presumably my homeroom is as inclusive as his, but who can say? I might have been home-schooled. You don’t know!

Anyway, consider this: I am only slightly younger than Naomi Wadler, the 11-year-old black Jewish girl who spoke at the March for Our Lives demonstration in Washington, D.C. and talked about representing other black girls around our age who are victims of gun violence, “the African American girls whose stories don’t make the front page of every national newspaper, whose stories don’t lead on the evening news.”

Granny Rose made a crack about Aunt Jackie “taking a knee” instead of saying grace one time, right in front of me. The assumption is that I have no clue that punchline is about people who look like me, protesting violence and lethal force and the dangerous unconscious bias black people contend with all the time. But do not misinterpret my silence and apparent boredom as indicators that I am not paying attention.

For all you know I could have been recalling what my dad told me Granny said about my mom way back when dad was about my age, which was in season 7. “Black people are just like us,” Granny told dad. “They're every bit as good as us, and any people who don't think so is just a bunch of banjo-picking, cousin-dating, barefoot embarrassments to respectable white-trash like us.”

That’s true, but we all know that the world sees people like me differently. Beyond the safe walls of my grandparents' house, Lanford may treat me differently. Grandma Rose and Grandpa Dan can shower me with all the affection in the world. That doesn't change the reality that I am at an age where adults will unconsciously view me as less innocent than white girls. That bias also means that I, and girls who look like me, will face more educational disadvantages regardless of our intellectual ability.

Heck, in a few years I may find out that I am barred from using bathrooms in public spaces, such as cafes,  just because of my skin color. Nor can I peacefully wait for friends in one of those spaces without having the police called on me. Meanwhile my white peers can use the facilities without causing suspicion and without making a purchase.

The current batch of “Roseanne” episodes were written long before the whole Starbucks brouhaha, it’s true. However, take a look the end of the seventh season episode titled “White Men Can’t Kiss,” where my dad, as a child, didn't want to kiss a black girl who may or may not be a younger version of my mom. At the end of that episode Granny Rose refused to let a black man into her diner near closing time because he seemed "scary." Only after he identified himself as the father of the girl my dad didn't want to kiss — possibly my maternal grandfather, in other words — did she deem him safe enough to let inside.

All of that is to say, these are not black stories about the black kid. These are stories about life in present-day America. And isn’t the professed mandate of “Roseanne”  to filter the experiences of the typical American family through the story of my family, the Conners? Isn't there enough curiosity about me, Mary, to give me meaningful dialogue that speaks of my uniqueness? That allows people to view me as a fully-formed human being?

The adult Conners are wrestling with a lot of problems, like being able to afford medication or pay for a bunch of baked goods Harris randomly destroys. (Thanks Harris!)  And yes, aunt Darlene and my cousins live with my grandparents, which explains why they get more screen time than I do. But sometimes I just think to myself, why am I here?

Or as Mr. Ellison asked, “Whence all this passion towards conformity anyway? . . . Must I strive towards colorlessness? But seriously and without snobbery, think of what the world would lose if that should happen. America is woven of many strands. I would recognize them and let it so remain.”

Otherwise my existence is as pointless as attempting to make a cat bark like a dog.