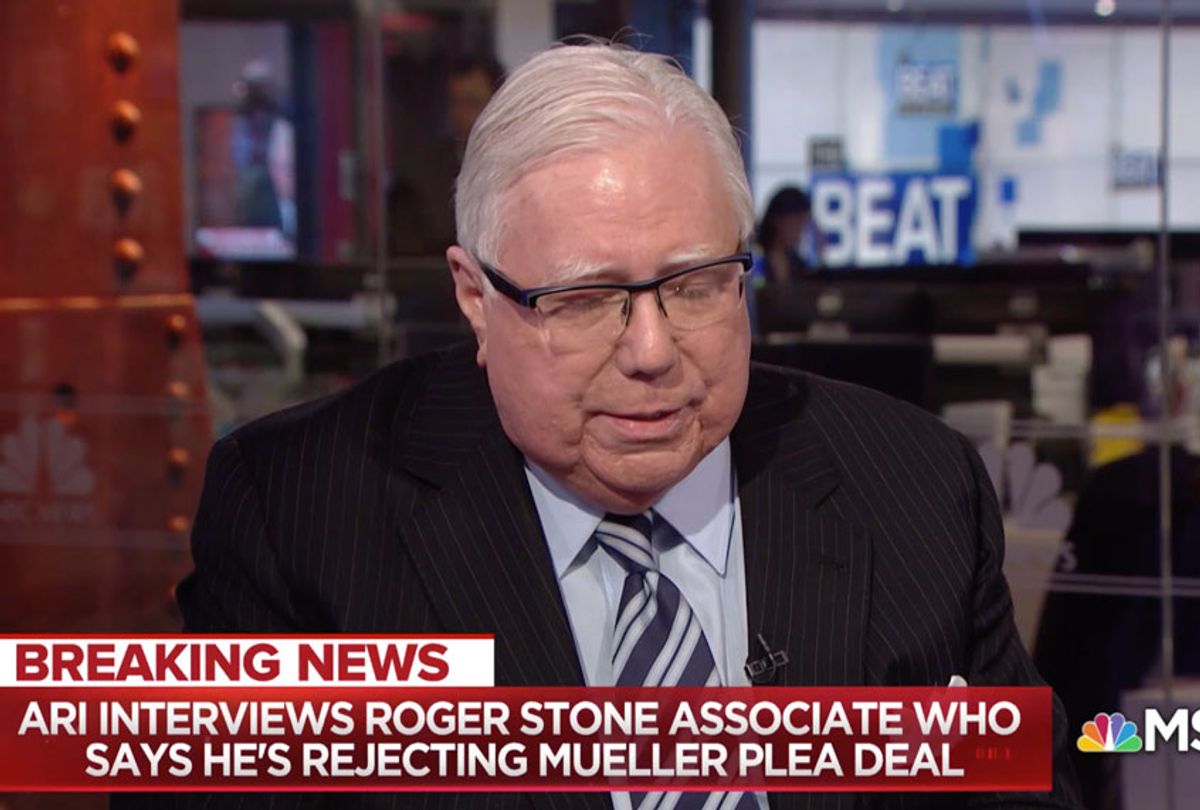 Jerome Corsi, the right-wing conspiracy theorist and a key witness in special counsel Robert Mueller's investigation into allegations of collusion between Donald Trump's 2016 presidential campaign and the Russian government, admitted on Wednesday that he "absolutely" planned to help the Trump campaign by trying to obtain emails stolen from Hillary Clinton's presidential campaign from WikiLeaks.

"Everybody in the world who was in news or political operations after July 22, 2016 when Assange dumped all these emails on Debbie Wasserman-Schultz and said he had more – everyone wanted to know what they were," Corsi said Wednesday night on MSNBC.

"You wanted them out, though, to help the Trump campaign," Melber interjected.

Corsi responded "absolutely" and suggested that doing so was not wrong. Later in the interview, Corsi said, "Even if Julian Assange had stolen material that was classified, as a journalist, I can see them. I can get that material, and I can publish it. I am not committing a crime."

Corsi also told MSNBC that he "might die in jail" after rejecting an offer from Mueller for a plea deal on one count of lying to federal prosecutors. He said earlier that that he did not believe that he had lied.

This week, it was revealed that Corsi had notified Stone in an email that WikiLeaks was planning to release a trove of emails stolen from Hillary Clinton's presidential campaign ahead of the 2016 election. Draft court documents from Mueller's office reportedly allege that Corsi made false statements while appearing before the special counsel's grand jury. At the time, Corsi reportedly told investigators that Stone asked him in the summer of 2016 to get in touch with WikiLeaks about unreleased materials relevant to the presidential campaign. Corsi said he turned down the request and told Stone that an effort to contact WikiLeaks could put them in a questionable spot with investigators.

Mueller's team, however, has said that Corsi did not decline the request, and that he instead passed it along to conservative author Ted Malloch, who is based in London. Eight days later, Corsi reportedly sent the email to Stone, saying that WikiLeaks had obtained information that would be damaging to Hillary Clinton's presidential campaign and planned to publish it in October.

The whistleblower site made two separate email dumps during the heated 2016 race that altered the trajectory of the presidential election. Mueller has indicted 12 Russian intelligence officers in a sustained effort to hack the computer networks of the Democratic National Committee, Hillary Clinton's presidential campaign and the Democratic Congressional Campaign Committee in the weeks ahead of the 2016 election. The damaging emails were released by WikiLeaks.

Earlier this month, Corsi said that he expected to be indicted for "giving false information to the special counsel or to one of the other grand jury." He has claimed he anticipated WikiLeaks' release of the hacked emails by "connecting the dots" between public statements from Assange and other available materials.

"Why did I think they were coming out in October? Because I said to myself, 'If I had these emails, I'd use them as the October surprise,'" Corsi told NBC News on Tuesday. "And why did I think they would come out serially, drip by drip? Because Assange is very strategic. He understands the news cycle."

Stone, meanwhile, has adamantly denied any wrongdoing regarding WikiLeaks' releases during the 2016 presidential campaign, and said Tuesday that the newly-released emails don't suggest otherwise.

"None of these emails provide any evidence or proof that I knew in advance about the source or content of any of the allegedly stolen or allegedly hacked emails published by WikiLeaks," Stone said. "Since when did gossip become a criminal offense? Where is the WikiLeaks collaboration? Where is the evidence that I received anything whatsoever from WikiLeaks and passed it on to Donald Trump? These emails prove nothing other than the fact that Jerry Corsi is an aggressive investigative reporter."