Trump doubles down on Rod Rosenstein threat: “He should have never picked a special counsel” 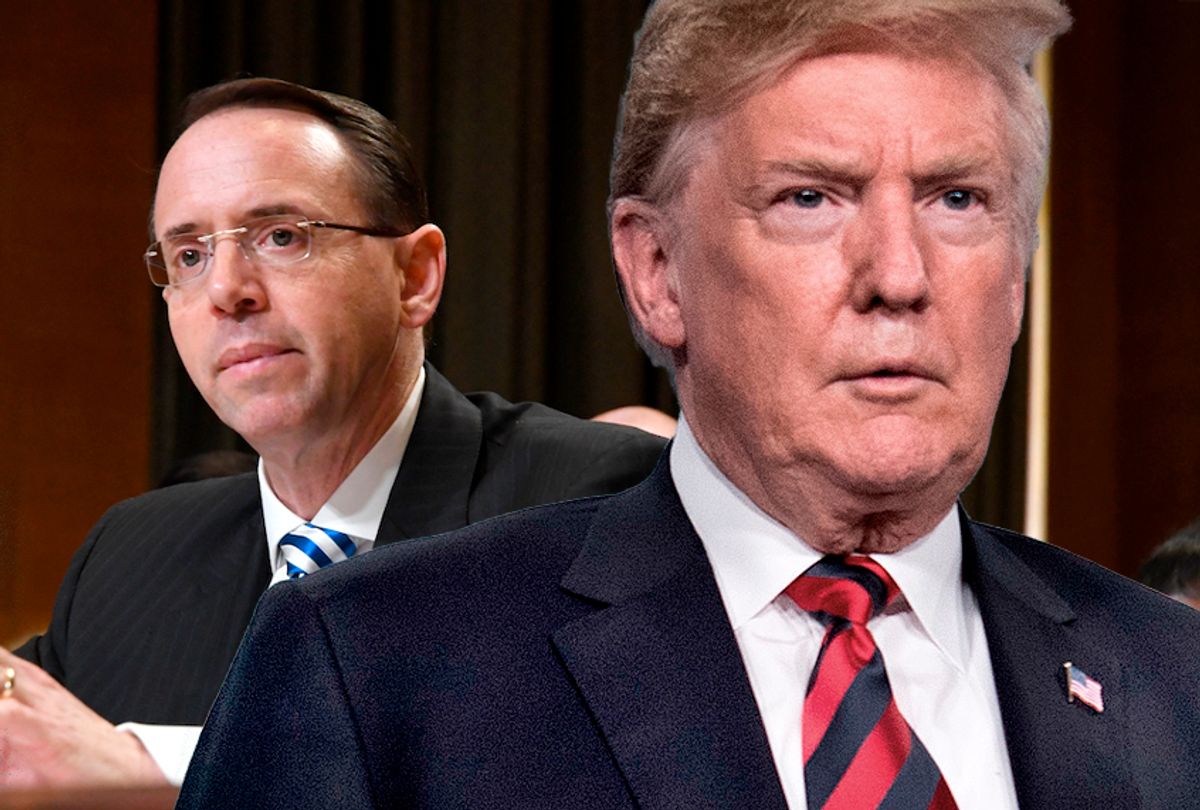 President Donald Trump isn't backing down from one of his most ludicrous retweets in recent memory — and it makes clear some of the darkest features of his nature.

Wednesday morning, the president retweeted an image of many of the people he considers enemies behind bars with the question, "Now that Russia collusion is a proven lie, when do the trials for treason begin?" (Of course, it's already been demonstrated that Trump campaign members did collude with Russia — the only question is about how far it extended.)

Among those in the image were Special Counsel Robert Mueller and Deputy Attorney General Rod Rosenstein:

Rosenstein's included in the picture was perhaps most notable, given that he currently serves under Trump and was appointed by him. Trump could, in theory, fire Rosenstein any time.

But when the New York Post interviewed Trump Wednesday, he didn't distance himself from supporting the image and the idea that Rosenstein should be locked up.

“He should have never picked a special counsel,” Trump told the Post when asked why Rosenstein should be behind bars.

This was, of course, a preposterous explanation. There's nothing illegal about appointing a special counsel — Rosenstein has the authority under the law. There's certainly nothing treasonous about it. Importantly, when Mueller was first appointed, even many Republicans and allies of the president praised the pick, viewing the former FBI director as a reliable and upstanding public servant. These allies of the president only started criticizing Mueller when it became clear that Trump was at serious risk of being caught in a crime.

But aside from the specifics of the tweet, everyone should object to the fact that the president has become completely comfortable with demanding that people he disagrees with politically should be locked in prison under the thinnest of pretenses. It's a disturbing and dangerous habit that he has acclimated his followers to and encouraged them to embrace. Even once Trump is gone, they may demand it of future GOP leaders, and the country could slouch toward authoritarianism.

And at the same time, Trump insists that his allies, like Paul Manafort, are being poorly treated when they are locked up after their crimes have been proven beyond a reasonable doubt or even after they have admitted to the crimes. And when others, like Saudi Crown Prince Mohammed bin Salman, failed Senate candidate Roy Moore, and Justice Brett Kavanaugh, are accused of serious crimes and abuses, he demands impossibly high standards of evidence to assess to these allegations.

This pattern shows that the rule of law and justice doesn't matter to Trump — only whether people can serve his interests.