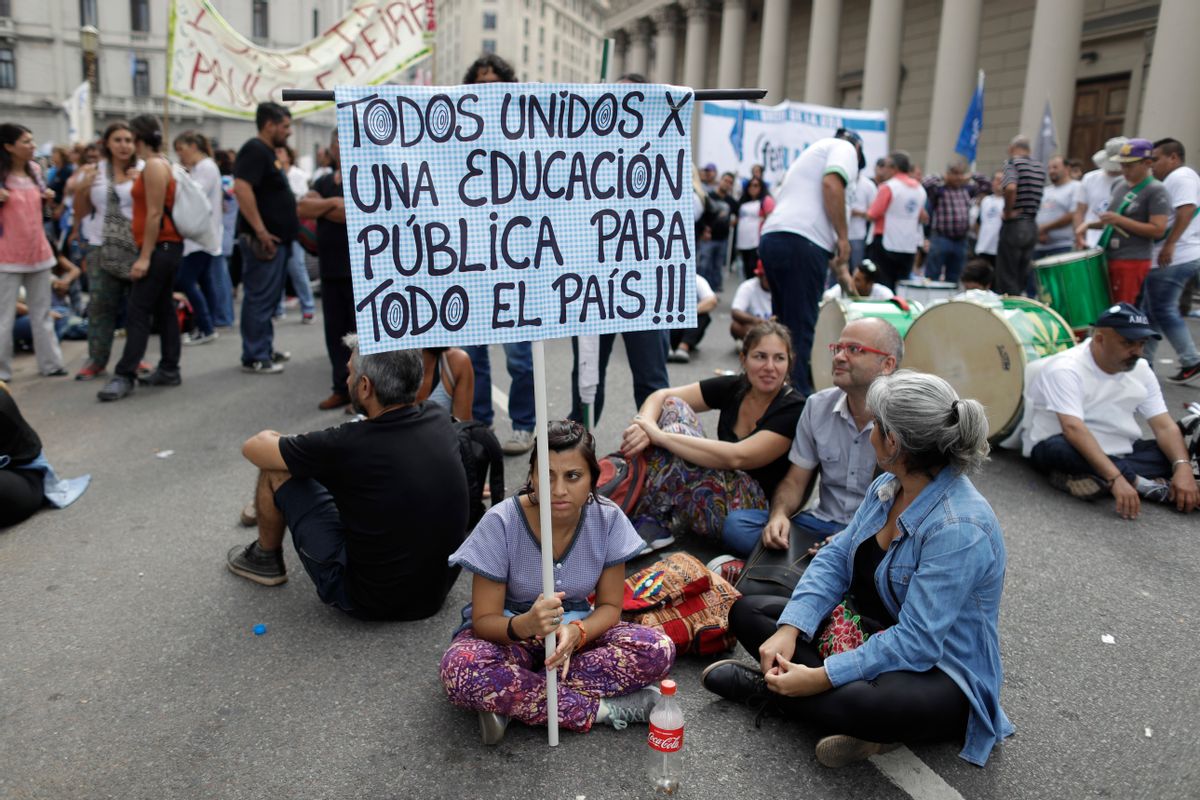 A teacher holds a sign with a message that reads in Spanish: "All united for public education for the entire country", during a protest demanding higher wages in Buenos Aires, Argentina, Wednesday, March 22, 2017. Tens of thousands of teachers marched to Plaza de Mayo, the park overlooking the presidential palace, during their fourth day of national strike. (AP Photo/Victor R. Caivano) (AP)
--

Leaders of the world’s biggest economies have gathered in Buenos Aires for the annual Group of 20 Summit to discuss some of the most important issues facing the global economy, from the future of work and food security to U.S. President Donald Trump’s trade war and the Khashoggi killing.

And although their host, Argentine President Mauricio Macri, probably won’t want to talk about the dire state of his country’s economy, heads of state need only use a cash machine to see evidence of it. A U.S. dollar worth just 20 pesos in April today converts into almost double that, making the Argentine currency the world’s worst performer this year.

We’ve been following the ebbs and flows of the Argentine economy for two decades and are currently wrapping up a book on economic and fiscal policy in Argentina, Brazil and Chile. Here’s a quick look at what went wrong and how it could get better.

Pesos have been fleeing the country. The economy has been sinking deeper into recession. And the country is suffering the worst drought in decades.

For Argentina, it’s more of the same. The country has suffered through many economic crises in recent decades. And pretty much every time, the catastrophic meltdowns ended with some combination of unsustainable national debt, high unemployment, rising poverty rates, looting, bank runs, capital flight and hyperinflation. That in turn set the stage for the next economic crisis.

But it didn’t have to happen this time. Only two years ago, Argentina’s leadership had appeared to learn lessons from the past and were governing the economy pretty effectively. Capital controls helped stabilize the peso and strengthen the financial sector, while prudent government spending helped reduce poverty. Consumer spending grew and unemployment and income inequality fell.

So when Macri became president at the end of 2015, there was a foundation of beneficial policies in place that supported the government’s coffers — as well as some challenges.

But, instead of pursuing a path of fiscal responsibility to rein in spending and inflation, the center-right Macri decided to cut taxes for businesses and borrowed record amounts in dollars to do so. At the same time, he eliminated the capital controls put in place in 2002.

Unsurprisingly, all of this made the country more vulnerable to a crisis, which began in May when a particularly bad drought – the most expensive in Argentina’s history — dried up important export crops, such as soybeans and corn. Argentina is the world’s third-largest exporter of both.

Foreign investors, concerned about the government’s ability to meet its obligations, began dumping short-term central bank debt. Meanwhile Argentines, acutely aware of any whiff of economic trouble, began to get rid of their pesos too.

By June, Argentina was seeking help from the International Monetary Fund in the form of a US$50 billion line of credit, which is the most a country has ever received from the institution.

Argentina immediately drained $15 billion of the IMF’s money trying to stabilize the peso.

It succeeded, but, to keep the peso from falling further, the central bank has been selling tens of billions of pesos worth of bonds at yields as high as 70 percent — the highest in the world.

Although that has staunched the bleeding, the wound remains deep. The peso is hovering near a record low, and economists recently revised their forecast for 2018 inflation to 47.5 percent, double their estimate in April. To make matters worse, the IMF expects the Argentine economy to shrink 1.9 percent in 2019 after contracting an estimated 2.6 percent this year.

Fortunately, there’s some room for optimism. Finding its way out of this mess, however, depends on whether Argentina follows through on the IMF’s condition to eliminate the budget deficit by 2019.

And whether it adopts other prudent policies such as increasing public revenue by re-instituting export taxes and putting in place currency controls to ensure a stable peso.

This is a modified version of an article originally published on Oct. 12, 2018.