Holiday stress affects women more than men, because women take on more work. Here's a job to split down the middle 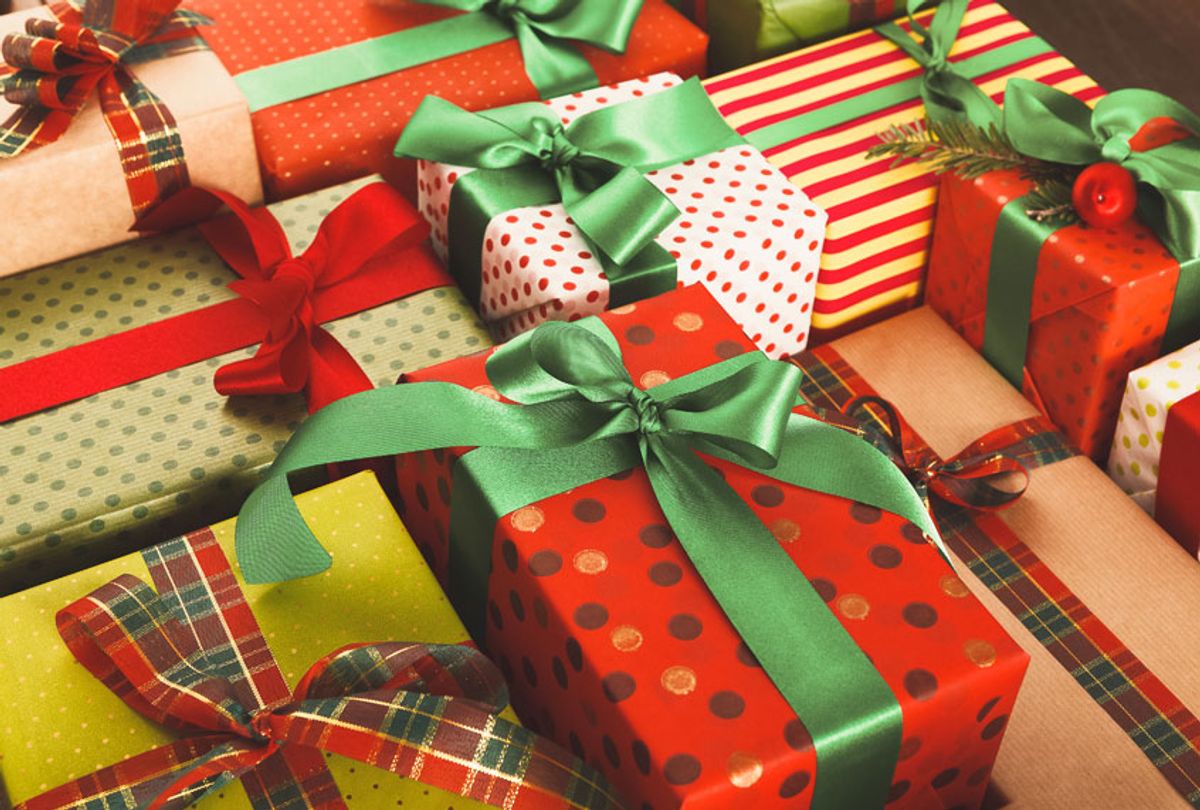 It’s no secret why in study after study, more women than men report an increase in personal stress during the holidays. This was true in 2006, according to American Psychological Association research — before the perfection pressures of Pinterest and Instagram, even! — and it remains true today. Women take on more extra work at home during this time of year, and potentially in the workplace as well, organizing those Secret Santa exchanges and the annual office potluck, because they're expected to. While holiday celebrations can add a layer of sparkle and light to an otherwise dark and cold time of year, the work that goes into making that magic can take its toll, especially on top of the disproportionate amount of household labor that working women partnered with men still shoulder.

One area of holiday work that all women haven't managed to share with their partners is gift shopping. It defies logic, and yet in this Year of Our Gritty 2018, many women are still sweating over the exact right gifts to buy or make for their male partners’ parents, siblings, and various other exchanges, then dutifully signing the label Love, Both Of Us.

I'm a staunch believer in splitting the gift responsibility down the family-of-origin line, because I'm a middle child obsessed with fairness. But I wasn't surprised when I heard some friends — all high achievers juggling multiple responsibilities between paid work, entrepreneurial projects, and in some cases children — talk very matter of factly about doing it all themselves, despite their husbands being mobile and perfectly aware of two-day shipping. If I don't, we'll show up empty-handed, one woman explained. What holiday stress? another reported her husband wondering aloud, after she finished negotiating a complex web of family holiday coordination.

My entirely unscientific Twitter poll of 600 random anonymous women partnered with men showed 34 percent of those responding do all of the holiday shopping — not a majority, but still higher than I'd expect in 2018, especially since I don't think 34 percent of my followers hail from the pre-feminist era. On Facebook? That went up, to 51 percent.

A ratified ERA might still be a dream, but more women can at least reclaim some of their unpaid time by refusing to do it all for even one more holiday season.

A note on gender here: I specifically polled women who are partnered with men because studies show same-sex couples divide housework — and gift shopping feels housework-adjacent in its traditional gender role assignment — more equally, unless or until they have kids. And I've observed the phenomenon of the woman doing all the shopping on behalf of the man in families that do and do not include kids. But by all means, if everything about this narrative but gender also describes your dynamic, this discussion is for you too.

I was raised as a feminist and yet growing up, it was understood that my mother selected and purchased and wrapped and shipped all gifts not only for the kids but also for the whole extended clan — both sides, even those on the other side of the Atlantic — just as her mother and mother-in-law had before her. Men were welcome to participate if they chose, but were largely exempt from duty, a freedom they claimed as easily as oxygen. My grandmothers and mother all worked outside the home, mind you. And yet during December, they pulled triple duty — at home, at work, and in the department stores and toy shops — and the men were allowed to opt out if they wanted, except for the gift they bought her. I remain irritated that a man, Santa Claus, was allowed to claim credit for my mom's work for as long as he did.

In the first year or so of marriage to my ex, because I was young and stupid and had internalized that this was my role, too — something I could show off about myself, to prove my social value to a new family unit — I jumped into gift-wizard mode, suggesting thoughtful presents for my in-laws based on such magical powers as listening when they talked and noticing what they liked. Girls and women are rewarded for those soft skills, and like lab mice and Instagram influencers, I respond to rewards. But after I added a second job on top of my day gig, while also working on creative projects, that particular reward lost its allure relative to my free time, and I guess he bought things for them (who can remember?) and nobody died (I know this one is true) and Christmas wasn’t ruined either way. That I noticed. Not noticing is a move I learned from watching men, and it’s more intoxicating than barrel proof bourbon. Some days, it even tastes better.

Later in my life, when my relationship with the man I’m now married to turned serious, not only was I already set in my ways at the holidays, my then-boyfriend revealed himself to be an incredibly thoughtful and diligent gift giver, to the point where I wish I could hire him as my Christmas concierge. (Maybe after the gender pay gap is closed.) Now I'm free to occasionally hand-select a gift for someone on his origin-side — lovely people who are now my family as well — if the spirit moves me (like 24 percent of my Twitter poll responders, too), but it's not my responsibility, and I do not want it to be. Maybe I've been a writer for too long, but if I do all the work, no way am I sharing a byline.

In an interview with The Atlantic this week, sociologist Arlie Hochschild, who coined the term "emotional labor," discussed the term's mission creep of late as women struggle to find precise language to describe within their households what one woman quoted in Elizabeth Watson and Hana Schank's illuminating book "The Ambition Decisions" called "all the bullshit things I do that he would not even think to do." According to Hochschild, holiday magic-making falls outside of the "emotional labor" rubric — it's just work, actually — but she also questions why holiday homework has become perceived as such a drag:

There seems an alienation or a disenchantment of acts that normally we associate with the expression of connection, love, commitment. Like “Oh, what a burden it is to pick out gifts for the holiday for my children.” Or “Oh, it’s so hard to call a photographer to do family Christmas photos, and then to send it to my parents.” I feel a strong need to point out that this isn’t inherently an alienating act. And something’s gone haywire when it is. It’s okay to feel alienated from the task of making a magical experience for your very own children. I’m not just judging that. I’m saying let’s take it as a symptom that something’s wrong. I think a number of my books speak to that. The Time Bind says, wait a minute, what if home has become work and work has become home?

Males not participating fully in that; that’s a problem, too. But in a sense, a family is a shock absorber of the trends that are bearing down on it, and in The Second Shift I argued that one of those trends bearing down on it is that women are forced to change faster than men are forced to change. Women have had to go into the labor force to compensate for declining wages of men. We think of these as sheerly family issues, but they’re not sheerly family issues. They’re a symptom of something bigger.

It's true — and there are so many symptoms of many bigger problems. Take this NPR interview with outgoing Democratic Senator Claire McCaskill where she discusses how women in politics have “a really hard balance” to strike that “has to do with being willing to be self effacing and have a sense of humor.”

"I think I can really help other women, you know, understand that really difficult balance you have to have as a woman of being strong and opinionated but very careful that you don't go too far over the line so that you're in the B-word territory," McCaskill told NPR.

(The B-word is not, alas, barrel proof bourbon.)

It's also infuriating that McCaskill's best plan for dealing with these insidious and unfair barriers women face is to push Ten Simple Tricks For Making Him Think He Likes You, but she's not wrong about the problem. Women are still penalized — professionally, politically, and personally — for not performing the job of Woman in such a way that soothes the irrational emotional responses men and other agents of the patriarchy have when we step out of line with their expectations that we be forever in good humor and remain self-effacing — not to mention self-sacrificing — above all. Gift shopping is low on the stakes ladder compared to running for Senate, or President, but this is all part of the baggage package that starts at home, and conditions us to expect women to be the keepers and agents of magical experiences only, even on the Senate floor.

Several women who responded to my polls in the affirmative say they do this work on behalf of their partners because they're simply better at it. I think this is a common belief and obviously it's rooted in warm intentions and good cheer. But I call bullshit on so many individual men being innately incapable of thinking about what other people might want or need. I also call bullshit on preemptively taking care of everything so a holiday will not be "ruined" by slackers panic-buying dumb or last-minute gifts, especially if it's to demonstrate their incompetence so they will be let off the hook in the future. Grandma gets a gift card to Best Buy? What the hell, everyone needs extra phone chargers. There's barrel proof bourbon in the egg nog!

Individual predilections aside, it's clear that centuries of social conditioning created the expectation for girls and women to build up their expertise in this skill, while men have not suffered consequences for taking a hard pass. This year, if this describes your household dynamic, why not give them the gift of a mandate to learn? Bartleby right on out of that job with an "I'd prefer not to" and let the chips fall where they may.

For my friend Dave, that turned out to be a positive experience. When he was married to his ex-wife she usually took care of all the gifts, until one year when "she felt I hadn't been pulling my own weight in this area" so she made him do it all.

"I think it was a good thing that I did it. It forced me to think about the perspectives of other people in my family in a way I had not before and was probably good for my empathy in general," he said. "That being said, since that time I have moved in a direction of not wanting to do gift giving at all. I ask that anyone who wants to give a gift to me donate to a charity instead, and I will provide a list of charities if asked."

Women aren't magic; we're just people. But there is something transformative about the process of selecting or making gifts that will delight the people in your life. So hey, guys who haven't done this before, or since you partnered up — pick your strategy. Designate charities for personalized donations, grab those practical gift cards, or go all out and game this holiday season out like you're trying to hit every festival act on your dream schedule before Saturday's headliner. Go all in this December! And when you write out the labels, put your own name first.