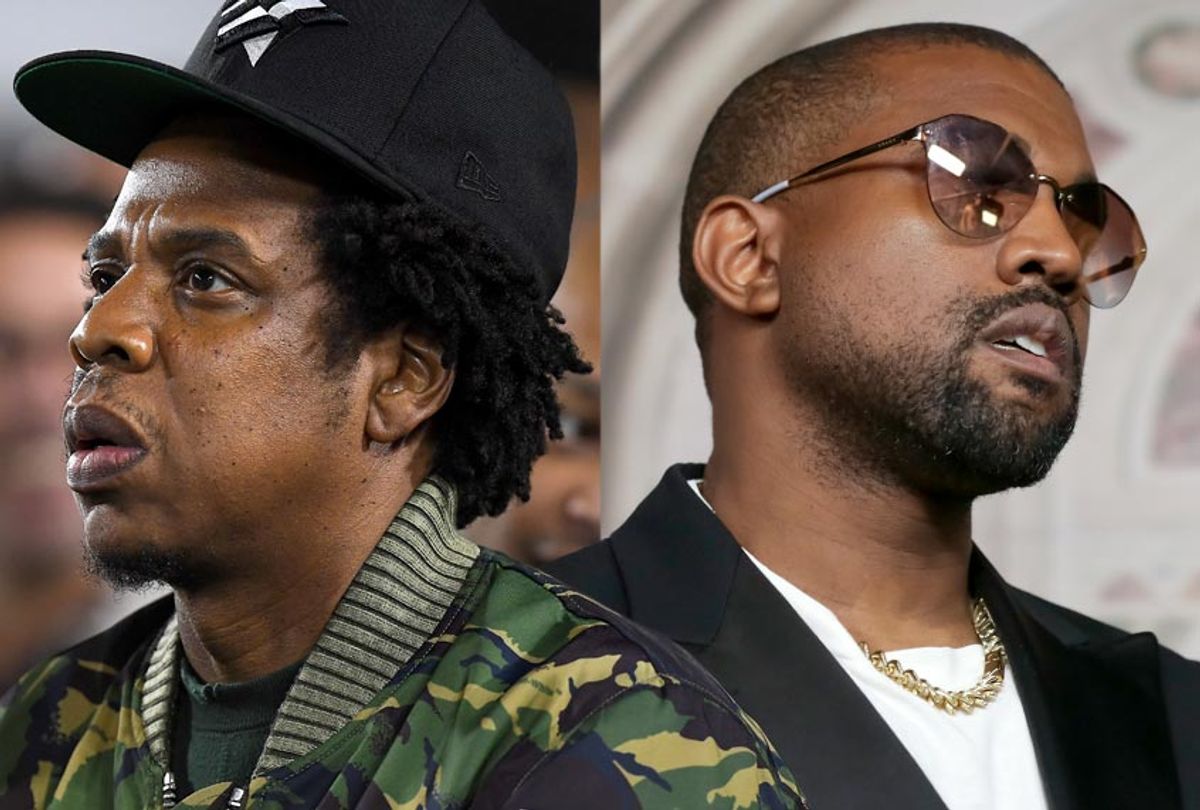 Kanye West ended his national Uncle Tom Tour in late October when he tweeted, “My eyes are now wide open and now realize I’ve been used to spread messages I don’t believe in. I am distancing myself from politics and completely focusing on being creative !!!”

The 41-year-old icon turned sell-out almost got out of his Trump affair unscathed, which is rare for hip hop culture. Hip hop is probably the most anti-Trump entertainment genre, next to stand-up comedy, and its community would normally jump at the idea of shredding a rapper who was foolish enough to trade his respect, legacy and soul for a bent MAGA hat.

But Ye is still a respected producer in the industry who has worked with some of the top artists, including Pusha T, Big Sean and Kid Cudi. That respect kept the rap giants quiet during the months where Ye professed his undying love for the president. No longer. Roc-A-Fella founder — and Ye’s ex-mentor — Jay-Z had some tough words for Kanye on in his verse in Meek Mill's “What’s Free,” a track off his new album "Championships."

Rapper Meek Mill’s unfair treatment by the Philadelphia judicial system brought national attention to his profile and prison reform in general when he was sent to prison by a controversial judge for parole violations stemming from an arrest for popping a wheelie on a dirt bike. "Championships," Mill's fourth album, debuted today.

"What's Free" samples the classic Notorious B.I.G. track “What’s Beef” and also features Rick Ross, who addresses recently incarcerated — and professional-troll rap pariah — Tekashi 6ix9ine, with Meek rapping about his own freedom and how easily it was taken away from him.

Then Jay-Z comes on with, "In the land of the free, where the blacks enslaved / Three-fifths of a man I believe the phrase." The line obviously addresses the contradiction of America fighting for and claiming freedom while enslaving Africans, in combination with the three-fifths compromise proposed by Constitutional Delegates James Wilson and Roger Sherman 1787, in which enslaved people would be considered subhuman and counted as three-fifths of a person when apportioning representatives and taxes. The line may also be a nod to Colin Kaepernick and his kneeling protests during the National Anthem at NFL games.

Then Jay-Z really takes the gloves off:

No red hat, don't Michael and Prince me and Ye
They separate you when you got Michael and Prince's DNA, uh
I ain't one of these house n***as you bought
My house like a resort, my house bigger than yours
My spou- (C'mon, man)
My route better, of course

This bar is short but complex and says a number of things. For starters, Jay is saying that even though he doesn’t wear a red MAGA hat and Ye does, he’s still not going to allow the world to make him crush Kanye. Black people with staunch differences are always pitted against each other, and here he uses Michael Jackson and Price as an analogy. Fans across the world always debated about who was better, MJ or Prince, and many believe that rivalry prohibited them from ever collaborating, which could have been beautiful.

Then Jay gets clever in the same set of rhymes, telling listeners that Ye isn’t even big enough, or relevant enough, for him to completely destroy, by saying he has more money, a bigger house and even that their wives — Beyoncé to Kim Kardashian — aren’t even close to being comparable.

In the end, Jay-Z disses Kanye just enough for the culture, and draws a clear line of separation between him and West, without completely dismantling him, which still leaves the door open for a Kanye and Jay artistic reunion. "Watch the Throne 2"? We’ll see.