Sex, lies and videotape: Is the Trump drama nearing its climax?

If our national drama is a bad gangster movie, are we finally close to the antihero's inevitable downfall? 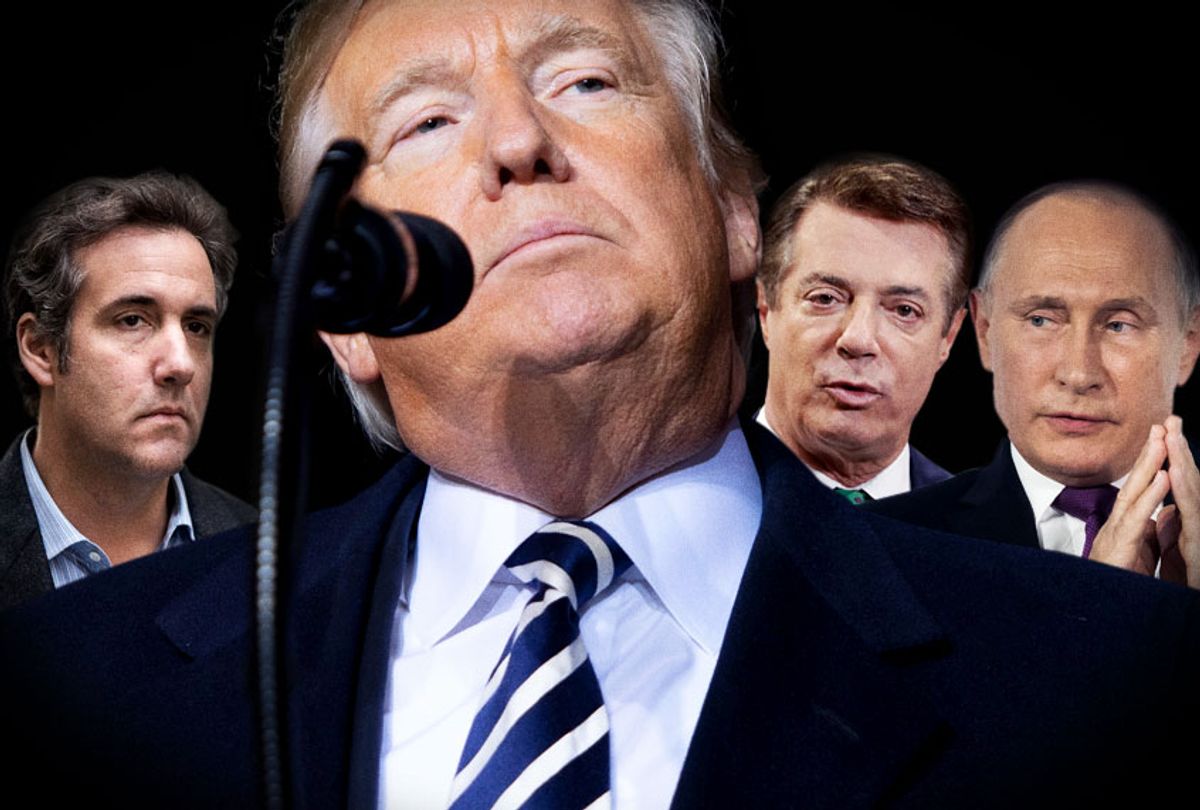 If Donald Trump's reign were a bad novel, what chapter would we be in? Still near the beginning? Somewhere around the middle? Drawing close to the end?

Wherever the American people and the world may be in this story, it is the stuff of hack writing. It's a genre remix and mashup, a story so simultaneously obvious, yet bizarre and full of intrigue, that it cannot be believed. But it is all so very real.

The Trump-Russia scandal is the driving force in the narrative. Here are some recent developments.

There is international intrigue, corruption and greed. Donald Trump's personal fixer Michael Cohen has pleaded guilty to lying to Congress, admitting that he was a go-between for the president and Russian elites -- conceivably including Vladimir Putin, Russian spies, the Russian mafia and other oligarchs. Cohen did this work while Trump was running for president and even as he became the presumptive Republican nominee. This is the very definition of collusion. Trump has consistently lied about these facts. On Thursday, Trump basically admitted as much saying to reporters, “There was a good chance that I wouldn’t have won, in which case I would have gone back into the business. ... And why should I lose lots of opportunities?”

Deutsche Bank, one of the few large financial institutions that will do business with Donald Trump, was also raided by German authorities on Thursday. As investigative journalists David Cay Johnston and Craig Unger have exhaustively detailed, such a move may well be focused on money laundering operations connected to Donald Trump and Russia.

There is sex, lies and videotape. Stormy Daniels was paid hush money to keep her quiet about her (alleged) affair with Donald Trump. Daniels is not the only one of Trump's purported sexual partners to be given money for the same purpose. Paul Manafort, Donald Trump's emissary abroad who rigs elections and is an expert in other types of dirty tricks, apparently enjoys "interracial cuckolding" -- a consensual kink that would ordinarily be nobody's business, but which text messages suggest his wife participated in with reluctance.

The information contained in Christopher Steele's infamous dossier about Trump, his inner circle and his Russian connections has repeatedly been shown to be correct. Given that, the most salacious details about Donald Trump and his rendezvous with Russian prostitutes appear more likely than not.

Donald Trump imagines himself to be a Mafia crime boss whose underlings have pledged him their lives. Trump raged publicly that Michael Cohen has "flipped." Donald Trump says that people who betray him to "the feds" are "weak." By comparison, Paul Manafort -- Trump's personal mole and informer, who has apparently violated his plea agreement with special counsel Robert Mueller -- is "strong." Trump has signaled that a presidential pardon awaits Manafort and others who remain loyal to "the family."

Roger Stone and Jerome Corsi have now been connected to WikiLeaks and the latter's release of stolen emails and other information from the Democratic National Committee and Hillary Clinton's campaign, all of which served Russia's plot to undermine democracy and install Donald Trump. In the clichéd mob movie "Trumpfellas," Stone and Corsi are his toadies and personal bagmen.

The violence, racism, bigotry and hate Donald Trump has encouraged mirror the images and sounds of history. Too much of this drama suggests documentaries made not too long ago in Europe and elsewhere, depicting how people and nations went collectively insane, mad with fascism and authoritarianism.

The age of Trump is dark comedy. Mike Judge's justly famous movie "Idiocracy" has been made real, with Trump as the professional-wrestling heel president, his MAGA-hat cultists, the right-wing media echo chamber, unchecked corporate power and the triumph of ignorance, stupidity and "fake news."

In many ways Donald Trump is like Cobra Commander from the G.I. Joe cartoon. Trump is a villain with overly elaborate plans who enjoys initial success before the good guys rally and he is betrayed by his allies, hubris and ego.

Reporters, journalists and those other Americans who follow politics closely are unable to resist this bonanza. But in their eagerness they may be missing one of the most important details from the last few days of revelations.

In his interview with the New York Post on Wednesday, Trump warned the Democrats that, “If they go down the presidential harassment track, if they want go and harass the president and the administration, I think that would be the best thing that would happen to me. I’m a counter-puncher and I will hit them so hard they’d never been hit like that." Trump continued talking about FISA warrants and other classified information, saying, "If they want to play tough, I will do it. They will see how devastating those pages are."

Then, on Twitter -- of course -- Trump continued to threaten his political enemies with prison.

On the surface, this is just another example of absurd behavior from a president who is a malignant narcissist and compulsive liar who lives in his own self-made reality.

But again, when the authoritarian speaks he should always be taken seriously. "Presidential harassment " is a new phrase, one probably never before used in American public discourse.

Donald Trump -- the American fascist and would-be dictator -- believes he is above the law: Accountability is now "harassment." Indeed, "presidential harassment" is Trump's updated version of the divine right of kings.

Like other Republicans and conservatives, Trump insincerely claims to respect the U.S. Constitution as a sacred document that should be "strictly interpreted" through "original intent." It is clear, however, that Trump has not actually read the Constitution or taken seriously the wisdom and warnings of the framers.

In the Federalist Papers No. 47, James Madison explained:

The accumulation of all powers, legislative, executive, and judiciary, in the same hands, whether of one, a few, or many, and whether hereditary, self-appointed, or elective, may justly be pronounced the very definition of tyranny. Were the federal Constitution, therefore, really chargeable with the accumulation of power, or with a mixture of powers, having a dangerous tendency to such an accumulation, no further arguments would be necessary to inspire a universal reprobation of the system. I persuade myself, however, that it will be made apparent to every one, that the charge cannot be supported, and that the maxim on which it relies has been totally misconceived and misapplied. In order to form correct ideas on this important subject, it will be proper to investigate the sense in which the preservation of liberty requires that the three great departments of power should be separate and distinct.

Much to Trump's disappointment, the President is not a king. In the United States there is supposed to be a system of checks and balances whereby Congress, the courts and the American people (informed and aided by the free press) hold elected officials accountable.

Coming days and weeks will see more political tumult as Robert Mueller continues to tighten his grip on Trump and his inner circle.

What happens next? As I suggested earlier this year, once Donald Trump is fully exposed and the extent of his treasonous behavior is made publicly known, he will say, "I did it to save America from Hillary Clinton and the Democrats. I am a patriot. I dare you to do anything about it!"

In this story there will be no magical deus ex machina moment where the story is neatly resolved for the benefit of the hero and the audience. The unbelievable story about a billionaire conman who became president of the United States with the help of a hostile foreign country will end in what might delicately be termed a clusterf**k. No one will get out of this clean or easy. America has been stained and sullied by a scandal right out of a horrible novel or screenplay.

Will there be a sequel where all these loose ends are tied up and all is made right in the world? We shall see; I doubt it.