Donald Trump's endgame: He may admit collusion — and claim he was saving America from Hillary

Trump's supporters literally accept whatever he says, and the GOP will never stand up. This will end very badly 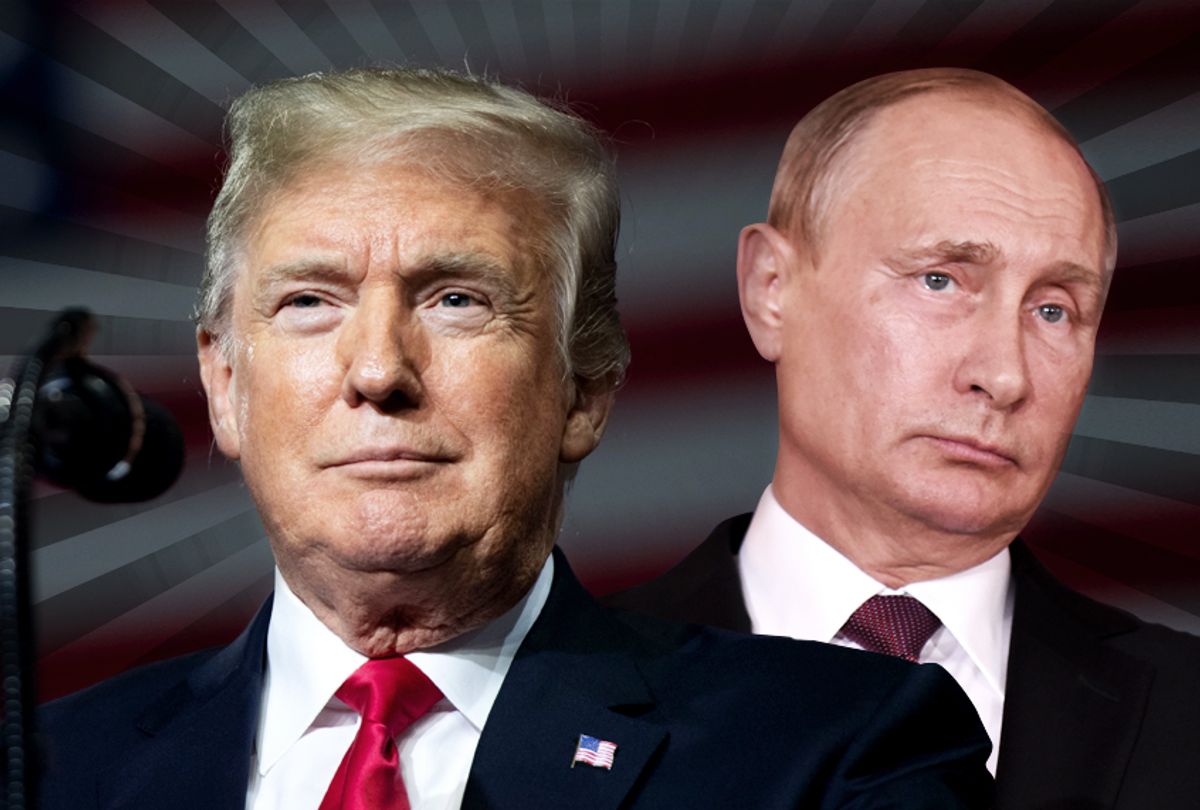 Donald Trump's presidency is like a poorly written spy thriller turned into real life. The newest twist in this painful never-ending story? After many months of denying that his son and other campaign representatives met with a Russian agent to discuss receiving damaging information about Hillary Clinton -- the cover story being that the meeting in Trump Tower was about the adoptions of Russian children -- on Sunday Trump admitted on Twitter that this was all a lie. He proclaimed: “This was a meeting to get information on an opponent, totally legal and done all the time in politics - and it went nowhere. I did not know about it!”

I have explained on numerous occasions that Donald Trump colluded with Russia in plain sight to steal the 2016 presidential election from Hillary Clinton and the American people. Trump has also continued to obstruct justice to conceal what was probably a crime and certainly a treasonous act.

In the New Yorker, Adam Davidson provides this context:

The President’s Sunday-morning tweet should be seen as a turning point. It doesn’t teach us anything new — most students of the case already understand what Donald Trump, Jr., Paul Manafort, and Jared Kushner knew about that Trump Tower meeting. But it ends any possibility of an alternative explanation.

We can all move forward understanding that there is a clear fact pattern about which there is no dispute:

It was possible, just days ago, to believe — with an abundance of generosity toward the President and his team — that the meeting was about adoption, went nowhere, and was overblown by the Administration’s enemies. No longer.

Trump and his spokespeople and other allies have been shifting the narrative from whether Donald Trump and his inner circle colluded with Russians during the 2016 election to "So what! Collusion is not illegal!" Trump's confession on Sunday is but the next step in an overall strategy of normalizing the heretofore unthinkable in American politics and society. In many ways, this is the Trump's administration's guiding principle.

Donald Trump will also continue his assault on Hillary Clinton, the Democratic Party and their voters' loyalty, patriotism and humanity. This too is but an extension of a decades-long strategy by Republicans and the right-wing media, in which violent and eliminationist rhetoric -- and stochastic terrorism -- directed at liberals, progressives, and Democrats is the norm.

Trump may finally admit that he worked with the Russians to stop Hillary Clinton because she was a "threat" to the American people and the "American way of life." Donald Trump will hide his behavior, and that of his allies, behind a mask that their goal was pure and patriotic.

On Monday, Donald Trump again signaled in that direction. He tweeted this:

Collusion with Russia was very real. Hillary Clinton and her team 100% colluded with the Russians, and so did Adam Schiff who is on tape trying to collude with what he thought was Russians to obtain compromising material on DJT. We also know that Hillary Clinton paid through a law firm, eventually Kremlin connected sources, to gather info on Donald Trump. Collusion is very real with Russia, but only with Hillary and the Democrats, and we should demand a full investigation.

Trump's political movement meets the definition of a cult. As explained by Steven Hassan, one of the world's foremost experts on the subject, "Donald Trump fits the stereotypical profile of a cult leader. His followers fit the model as well. Many of them, especially the ones that say, 'He could do anything and we would still believe him, we would still follow him,' sound like people who have been indoctrinated into a totalistic mindset."

Republicans and other conservatives are increasingly authoritarian and possess a deep disdain for democracy. Research by political scientists and others has revealed that "winning at any costs" -- even if that  means subverting democracy -- is increasingly all that matters for many on the American right.

Extreme political polarization and negative partisanship dictates that any criticism of Donald Trump is taken to be a personal affront and an attack on one's own personal identity by his voters and other supporters.

Fox News and the right-wing echo chamber function as a type of state-sponsored media who help to legitimate most if not all of Trump's policies and behavior.

Donald Trump is one of the most popular Republican presidents among his own party's members and supporters in the history of modern public opinion polling. Republican elected officials largely agree with his policies and do his bidding. Republicans, both elites and rank-and-file voters, will not abandon Donald Trump.

Responsible voices in the mainstream American news media will be aghast at Donald Trump's admission of guilt and his claims that collusion is just another word for "patriotism." But given the malignant reality that Trump and his enablers have created, all efforts by the fourth estate to be the watchdog of democracy will once again fail to stop Trump and the Republican Party's war on democracy and the truth. For Trump and his public, journalists and are "enemies of the people," to be vilified and, if need be, targeted for violence.

Of course the Republican Party and their voters and news media will never stand up against Donald Trump. This will be true even if Robert Mueller uncovers incontrovertible evidence that Trump and his allies intentionally and in violation of law colluded with Russia to undermine American democracy and that Trump personally obstructed justice in an effort to conceal the crimes.

Optimally, Donald Trump should be impeached, convicted and removed from office. That should also be the fate of any Republican elected officials who aided and abetted Trump's betrayal of American democracy and his treasonous behavior. Unfortunately, this is exceedingly unlikely. Democrats may well win a majority in the House of Representatives this fall, but most polling models and forecasts suggest they will be unable to do so in the Senate. (In any case, a two-thirds majority is required to convict a president in the Senate, and no party is ever likely to hold such a margin.)

The American people are the country's remaining hope. They will need to engage in nationwide strikes and protests that disrupt day-to-day life. Unfortunately, for a variety of reasons that range ranging from cowardice to learned helplessness and exhaustion, most Americans have become used to the moral, ethical,and political abomination that is Age of Donald Trump. Their outrage is spent.

As historian Richard Frankel warned in a previous interview about the rise of the Nazis and its lessons for America, "The unfortunate aspect is that if you set the bar so high in terms of outrage and horror then people all too often let things continue when they could have been stopped earlier. Once it gets to that point it's way too late." He is correct. History's epitaph for American democracy -- that less-than-perfect time before the irreparable harm inflicted on our country's democracy and culture by Trump's presidency -- may well include the observation that Americans surrendered their country with surprisingly little struggle.